Welcome to an ongoing inquiry about the behavior of people and dogs.
Blog Home >> Canine Cognition >> If I Only Had a Tail…

This is the time of year that I regret not having a tail. If I had one, I could curl it around my nose as did Nellie and Polly this morning, the thermometer descending toward single digits. Better yet, I could use it to wag from the shoulders back, like Willie does when Jim comes home. Or perhaps I could toss it up into the air, stiff and straight, and leave a committee meeting in a huff, my tail rising up like a standard held high in medieval England. I’m not sure where that image comes from, given that I’ve never left a committee meeting in a huff in my life. But then, it doesn’t mean I haven’t wanted to, and if I did, wouldn’t a raised tail make it that much more effective?

The fact is, tails are amazing things. Just look at all the functions that tails provide: BALANCE (see Willie on the left), WARMTH (foxes), SOCIAL SIGNALS (see earlier blogs on tail wagging translations and lateralization in tail wags), LOCOMOTION (fish), PREDATOR DEFENSE (lizards who drop their tails if caught, deer who flash the underside of their tails when pursued), THERMOREGULATION (Ah Ha! Now we know why those poor rats have naked tails.), COURTSHIP (see the elegant Tom turkey below), WEAPONRY (alligators and scorpions), PEST DEFENSE (horses), GRASPING (New World Monkeys and prehensile tails). Whew. No wonder I’m feeling the lack of a tail. 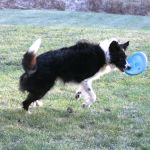 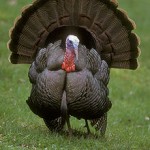 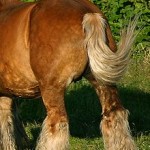 We actually begin life with a tail, but in almost all cases, it is absorbed by the body long before we are born. We’re left with nothing but a tail bone composed of a few vertebrae fused together, that primarily functions to hurt like hell if you fall on it. Trust me.

Tails have been on my mind lately not just because my nose has been cold and I’m jealous of Willie’s ability to let Jim know how happy he is to see him. (We humans do have other ways after all.) After reading Quaranta’s research on laterality in tail wagging, I’ve found myself watching Willie’s tail more than ever. A lot. You might recall the research: The dogs in the study wagged more to the right when facing their owners, and more to their left when facing a dog in a threatening posture. In addition, in 2013 Vallortigara and colleagues found that the heart rate of dogs was elevated when watching dogs whose tails wagged more to the left than right. All this suggests that a right-handed tail wag is a sign of a relaxed or happy dog, while a wag more to the left might suggest a certain amount of anxiety. Ever since then I’ve been watching Willie’s tail, and in summary: It is all over the place. This morning I walked down the stairs, while Willie stood at the bottom. As I began to descend, his tail clearly wagged more to his left. As I got closer to the bottom of the stairs, his tail wagged more to the right. Hummm. Clearly this is a complicated issue, but Vallortigara’s research is a fantastic start.

I leave you with three suggestions: First, start watching your dog carefully, really carefully, to see if there is a difference in lateralization. I will continue to the same. Second, here is a video of Willie and Tootsie, wagging their tail in two contexts (dining room and at the base of the stairs as I walk down.) You’ll note a ridiculous amount of me cooing to them; I found that the best way to elicit tail wags without leaving the house for a while.) If you want to play, watch the videos and evaluate the wags of either or both dogs. I’d suggest watching a few times, then beginning to focus on one dog at a time. Continue watching until you are confident you have seen what there is to see, and practice describing what you’ve observed clearly and concisely. I’ll read your comments and we can get back together about what we are seeing, or think we see, (or don’t see) sometime next week.

Third, I invite you to enter a contest based on the fact that I can’t get the following song from The Wizard of Oz out of my head. Your job, should you decide to accept it, is to channel Ray Bolger, and come up with an equivalent song about having a tail. I’ll continue skipping down the yellow brick road while you do.

Here are the words to replicate, except with a tail as a focus:

I can’t wait to read the entries! Send yours in by Wednesday December 18th, and we’ll get the book of your choice sent out right away (signed, of course, by me and Willie, after I teach him to write.)

MEANWHILE, back on the farm. Did someone mention that it’s winter? Oh yes, I think I read that somewhere. That might explain the frigid weather, the snow on the ground and the roaring wind. Brrrr. At least we missed the two feet of snow west of here. Any of our readers stuck in the storm?

The kitties are doing a lot of tail curling, given the frigid weather. King Charles seems oblivious, and has completed his mission. All four ewes selected to be bred have an ovine version of a scarlet A on their rump. Actually, King Charles has done more than his job, given that he got through a gate that I thought I had carefully latched… You know the rest. Willie and I found the entire flock up the hill together, King Charles standing possessively by Spot, a ewe I do not want bred again. Spot had triplets last year, each of whom needed to be hand fed for nine weeks because Spot’s udder went on strike. As it did the year before. Most producers would load Spot onto a truck and ship her out for mutton, but I am committed to keeping ewes into their dotage if they’ve been working for me producing lambs in the past. It’s their retirement policy, and I’m not a fan of businesses that promise one thing, and then change their minds when it doesn’t suit them. Thus, Spot and I are stuck with each other. Luckily, there is the equivalent of a “morning after” pill for sheep, so Spot will join the rest of the flock who have been taken out of the breeding pool, and be available for Willie and I to work while the others are nursing baby lambs. Whew. Yet another reason to thank my veterinarian.

Here’s Mr. Willie with his first “play in the snow” photo. Oh dear, I fear that “My Dog Plays in the Snow” pictures are a tad trite, but to those of us who live in the frozen north, we never tire of watching our dogs play after the first snow fall. Sorry, can’t help myself. But hey, notice that tail? 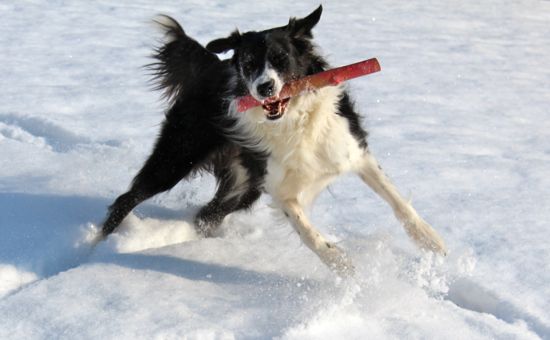 « Thanks Giving, Giving Thanks
Why Doggie, What Beautiful Teeth You Have! »