Welcome to an ongoing inquiry about the behavior of people and dogs.
Blog Home >> Border Collies >> Imitation # 2

Thanks for your comments with examples of what looks like imitation in dogs and cats. I was especially intrigued by the cat stories, having had a cat myself who did a perfect imitation of a herding Border Collie after watching me work Luke every day. Luke and I would drive the sheep up the hill to the pasture, and Ayla, my tiny, gray cat, would follow behind. She often sit on a log and watch as I worked Luke on gathering and driving. The sheep, although never abused, did not enjoy this exercise as much and Luke and I, and were always ready to bolt to the barn if given half the chance. When that happened, Luke would have to streak around them at lightening speed and stop them.

When we were done working I’d say “That’ll Do” to Luke and let the sheep run back down the hill. Once they discovered no one was going to stop them, they’d usually break into a full run and dash down the hill like deer. After a month or so of this, as Luke and I followed the flock back down to the barn, Ayla darted out of the adjoining woods in front of the careening sheep, lept up and smacked the lead sheep on the nose with her paw. The entire flock came to a screeching halt. Ayla sat down in front of them and looked directly at me. The thought bubble over her head, as I imagined it, said “I can do this too you know.”

For years afterward I had visions of taking Ayla to herding dog trials, and, Babe-like, amusing and amazing the spectators while AYLA THE HERDING FELINE marched the sheep around the course. Of course, that didn’t  happen, Ayla appeared to be content with her one demonstration of prowess, and I never took the time to try to turn her ability into a circus act. But this example fits with so many of yours of dogs and cats observing the behavior of another for some time, and then replicating it. The challenge, of course, is turning our anecdotes into an experiment that rules out other explanations.

There are two pieces of research that come to mind that did just that, the work of Milosi and others with the imitating Tervueren, and the research of Friederike Range in Vienna. Here’s a summary of each:

Miklosi (& Topal and Bryne) worked with a 4 year old Terv, Philip, who had been trained from an early age as an assistance dog for a disabled owner. Philip could open doors, pick up items on cue, switch off lights, etc. His trainers began to teach him a few cues that corresponded with the desired activity. For example, his cue for Turn Around was an owner turning around him or herself. The experimenters built on that, and taught Philip to replicate 9 actions that replicated the behavior of the human. First the dog was asked to sit and attend to the person to “Philip, listen.” Then the trainer performed an action, like putting an object into a box. The “imitate” cue was “Do it.” After 10 weekly training sessions, Philip correctly imitated the action of the person 72% of the time, a significantly  higher percentage than a result expected by chance alone. Skeptics will note, however, that this is not necessarily imitation, if the cue was the same as the expected action. The question is, did Philip begin to understand the concept of imitation, versus responding to a cue that happened to be the same as the desired outcome? That’s why Philip was then asked to replicate untrained actions, which he did correctly 63 out of 94 trials.

A second test, two years later, asked Philip to pick up a bottle from one of 6 boxes and place it in another, based upon the actions of his owner (which creates 30 possible sequences). Philip performed the exact same sequence as the one he observed 28 of 60 times, which is again significantly higher than expected by chance. (Remember there were 30 possible combinations.) In addition, many of his mistakes were still very close to the correct response. There’s lots more in the paper, “Reproducing human actions and action sequences: “Do as I do!” in a dog,” published in Animal Cognition Vol 9, 2006.

In the other study, Friederike Range trained a Border Collie to get food by pressing down on a wooden bar by using its paw (versus the easier and more natural way of doing it, by grabbing it with its mouth). Three groups of dogs were allowed to watch the dog pull down the bar in this way: One group watched the BC use its paw with nothing in his mouth, the second group watched the BC use its paw with ball in his mouth, and a third group was given access to the bar without watching the BC demonstrate. 83% of the dogs in the first group used their paws to pull down the treat, but in the other 2 groups only 21 % and 15% used their paws. The authors suggest that the first group of dogs consciously imitated the demonstrator with the assumption that the BC was using the most efficient way to get the food. The second and third groups used the most natural method, the second group presumably concluding that the BC would have used his mouth if he could have, but used his paw because his mouth had a ball in it. The test dogs had no such constraint, so they went ahead and used their mouths.  If this is true, it is not only evidence of imitation, but inferential and selective imitation. The full study is published in Current Biology, Vol 17, Issue 10, May 2007. Needless to say, it looks like our observations of dogs imitating the actions of others may have serious merit. I suspect that it is MUCH more common for dogs to imitate other dogs than to imitate people (I’ve never had luck with modeling a behavior, like lying down, with dogs, though some commented that they have). It just makes more sense for dogs to relate more to the actions of their own species, yes?

Thanks as well for the comment about Ken Ramirez’s work on imitation. He’ll be speaking the day after I do in Massachusetts, I can’t wait to hear him talk. He’s one of the best, and I learn something new and wonderful every time I see him.

MEANWHILE, back on the farm: Tornadoes a few miles away, torrential rains every night. Dramatic enough, but try leaving your partner’s Prius out one night in a downpour with all the windows all the way open. Makes for an impressive bolt out of bed at 2:30 in the morning, not to mention an hour of toweling, 2 hours of blow drying with a hair dryer and 4 hours of huge fans streaming air through its open doors. Whoops. Dodged a bullet I think.. car seems totally dry now. Whew.

I’m about to take off for the fund raiser in Milwaukee… truly looking forward to it. I was taking some more photos of play for the talk, and here’s my favorite of Will and the Scorpion. Dog bliss! 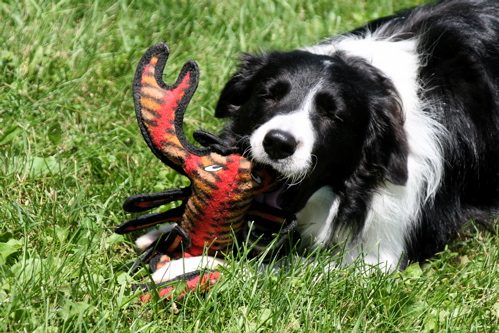