Welcome to an ongoing inquiry about the behavior of people and dogs.
Blog Home >> Animals and the People Who Love Them >> Indiana Jones, meet HRD Dogs

Dogs can find places where bones were buried 2,700 years ago, even when the bones aren’t there anymore. You might want to read that again, because it’s astounding.

One of the highlights of my month was interviewing Cat Warren about this discovery, highlighted in her recent article in the New York Times, “When Cadaver Dogs Pick Up a Scent, Archaeologists Find Where to Dig.” 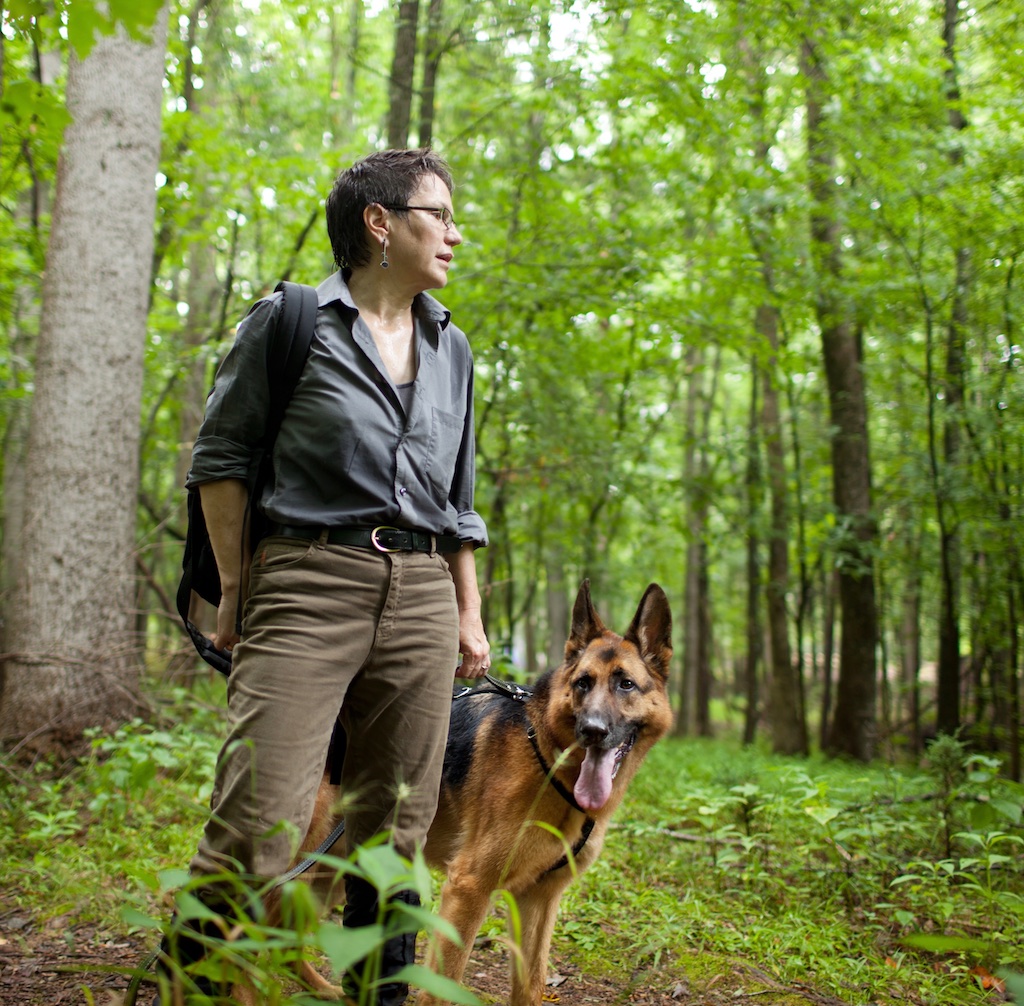 Cat (a Professor of English at NCSU) has become both a colleague and friend, although we have never yet met. Her NYT best-selling book, What the Dog Knows, (also in a fantastic Young Reader edition) is one of my favorite memoirs. After we read each other’s books, Cat and I have bonded over our love affair with working dogs, and our commitment to good writing. Someday I will get to watch her work her cadaver dogs (also called HRDs, or “human-remains detection dogs”), and she will come and witness one of my dogs working sheep. But for now, we talk on the phone. What a joy it was to get the inside story from her on dogs as archaeologists. As if they weren’t amazing enough already.

Here’s the bottom line: Dogs have been able to find evidence of human bones that have been in the ground for 2,700 years. But it gets better than that. Four HRD dogs, including Panda below, were able to detect burial chests at an archaelogical dig site in Croatia, where bones and teeth had lain for almost three thousand years, but had been removed by archaeologists months before. The dogs alerted on limestone burial containers that had held human remains for 2,700 years, but the bones were not there anymore, and had been gone for several months. 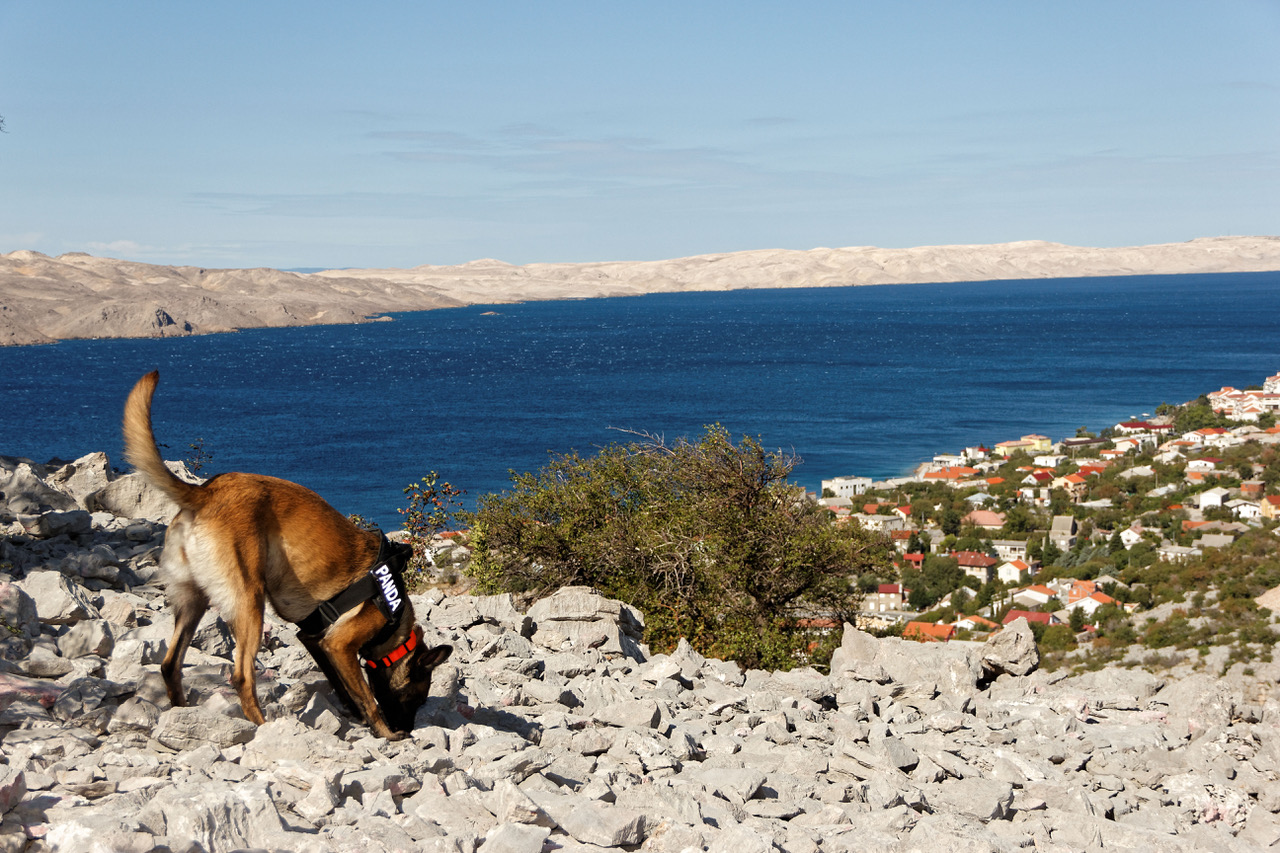 Panda, searching for the scent of human remains in Croatia, Photo by Zlatko Balaš

Here’s a short video that shows the dogs in action: (Video great, music awful, I suggest playing on mute.)

The dogs were trained by Andrea Pintar and her husband Christian Nikolić, and already had experience searching for human remains which had been buried for many years, including sites of mass executions going all the way back to World War II. Cat explained to me that most cadaver dogs would not be able to detect remains that had been in the ground so long. Not because their dogs aren’t capable of it, but because the dogs normally move too fast to detect such weak odors. Mali and Panda had intentionally been trained to alert to teeth and bones that had been in the ground for decades, and to move oh-so-slowly over sites that might, or might not, contain ancient evidence of human remains.

Archaelogist Vedrana Glavaš had reached out to Andrea in hopes that her dogs could discover if her team had missed any burial sites in the prehistoric hill fort of Drvišica. 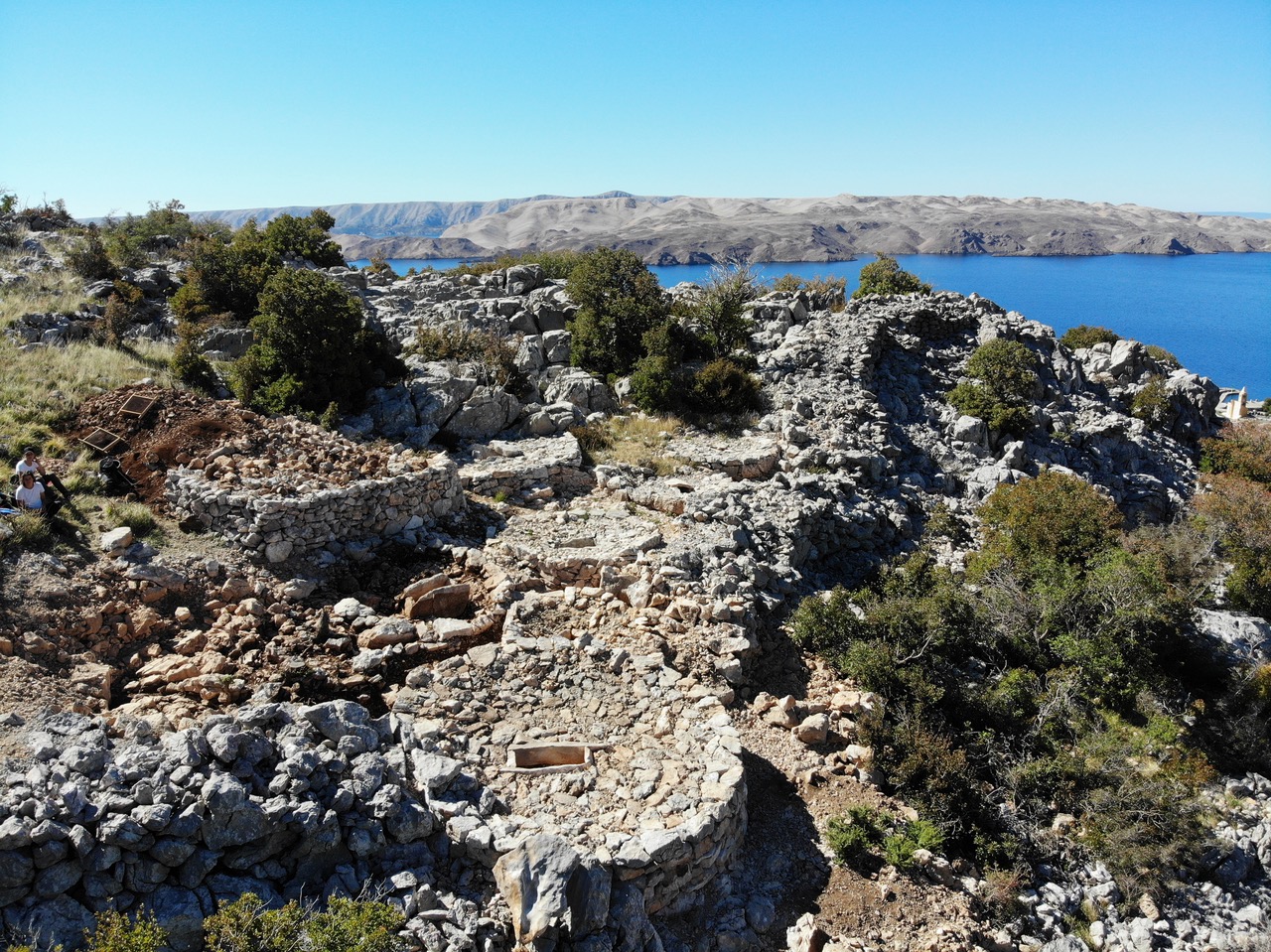 The prehistoric hill fort of Drvišica, photo by Vedrana Glavaš

Not only did the dogs find new sites, they alerted on burial chests which had already been found, and had had the human remains removed. Cat explained to me that the conditions were perfect: the limestone burial chests were the perfect material to hold the scent in place. So many factors influence were the scent remains: soil type, moisture, water flow, etc.

I love that the work was done as a scientific experiment: Could dogs help archaeologists by detecting ancient human remains? The study was carefully controlled, and included double-blind searches in which no one knew if the sites contained remains or not. The results were published in September 2019, in the Journal of Archaeological Method and Theory and will no doubt inspire archaeologists around the world.

However, this work has been going on under the radar for years, including here in the United States. Suzi Goodhope and her Belgain Malanois Shiraz found a human toe bone that was 1,700 years old, buried three feet under ground in Florida. Paul Martin and his dog found Indian mounds with human remains in Mississippi that had been flattened by agriculture.

And yet, no one still knows exactly what scent the dogs are focused on. There are hundreds of volatile organic compounds that dogs could be using to identify “human remains,” and no one knows what they are. Except the dogs, and they aren’t talking. Yet. Who knows what else they’ll be able to tell us in the future . . .

MEANWHILE, back on the farm: Sheep! Skip! Skip on Sheep! But . . . for short periods of time. With a few days rest in between. And a lack of clarity about whether he is truly ready once we gave it a try. His physical therapist said yes, he’s ready to try. He shows no sign of limping, short striding or abducting his knee when he’s walking or trotting. Or, does he short stride a tiny bit on his right hind? If he does, it’s so subtle that Courtney isn’t sure she’s seeing something, or just imagining it.

However, now that he is allowed to run, I can see his right knee moves off to the side the tiniest bit more than the left. Meaningful? Most importantly, did he always do that? Argh, the challenges of a new dog being injured soon after you get him. What is his “usual”? What’s not? I hereby beg all of you to video your dogs from the back and the side, both walking and trotting. Slow motion is best, which you can do on any relatively new iPhone. If you do, you’ll know what ‘normal’ is, if your dog is injured.

You might also want to avoid having your recently-injured dog leap over a two and a half-foot fence panel while chasing after a ewe. Skip lost his head and charged into the sheep on Saturday, and disappeared over the horizon, hot on her hooves. As I ran after them, all I could see was grass and sky. Imagine my surprise when suddenly I saw Skip air-borne, with the sky as a background, leaping over a fence panel. It was an amazing act of athleticism; he clearly hadn’t even seen the panel in his pursuit of the sheep. He must have had to make a split-second decision to leap over it to avoid running into it. I wish I could show you the picture that is burned into my brain, because it was gorgeous and dramatic, and, uh, terrifying for someone whose dog had recently been badly injured. Here is Skip and the panel he lept: 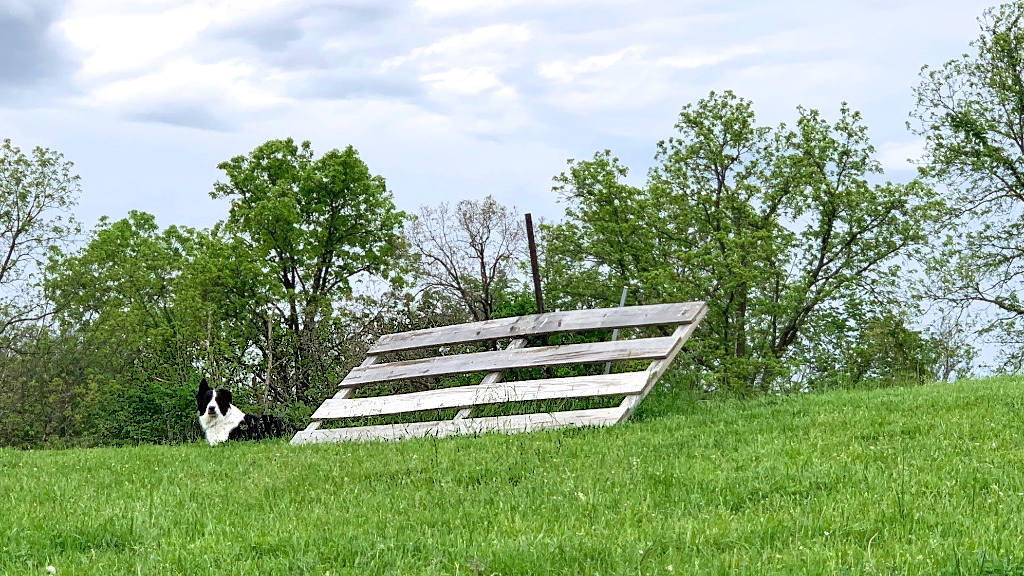 My heart in my throat, (another two months of leash restrictions and PT?), I caught up to Skip and called him off. I can’t blame him much for what he did, given his lack of work for two months. In addition, I suspect it had something to do with the cue I gave him. If I want Maggie to go around clockwise or counterclockwise with speed, I just say “Shuuush” rather than “Come By” or “Away”.  Maggie needs encouraging, and loves to stay well back from the sheep. This is great with flighty sheep, but means she struggles to move “heavy” sheep.  Skip is not going to have that problem. A young, freight train of a dog, he needs to be slowed down, the opposite of Maggie. I should have given him his regular flank signal. Live and learn.

After we got back to the house I iced Skip’s knee. I’ve kept him quiet for the last two days, and so far I think he’s okay. (The ewe is fine by the way.) Cross your paws.

Skip would like to work sheep again, please. One day at a time, son. 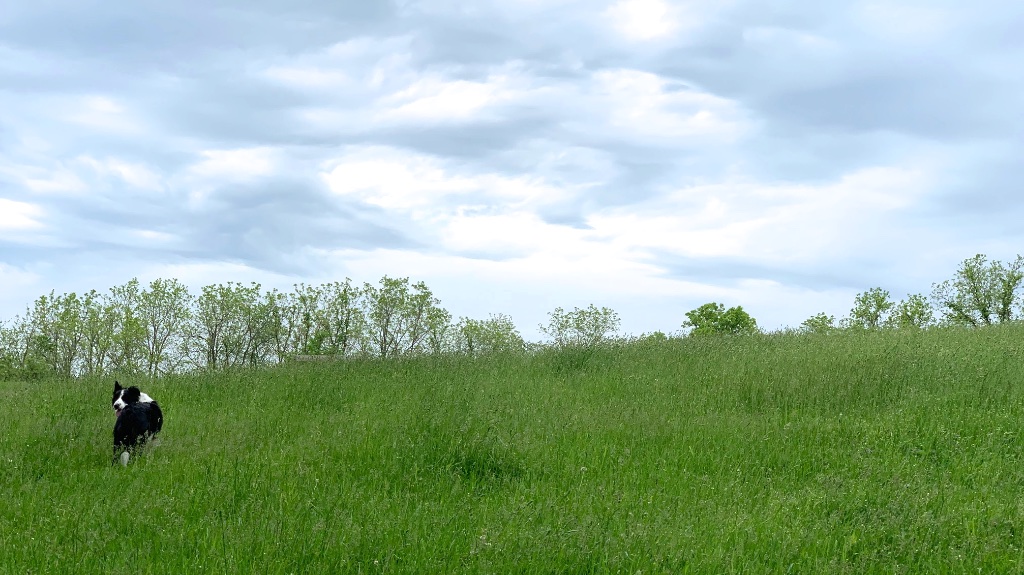 Quercus Land Stewardship came back this morning to burn the brush piles from all the honeysuckle they cut last month. Very dramatic, given that there were more than 10 piles over all. 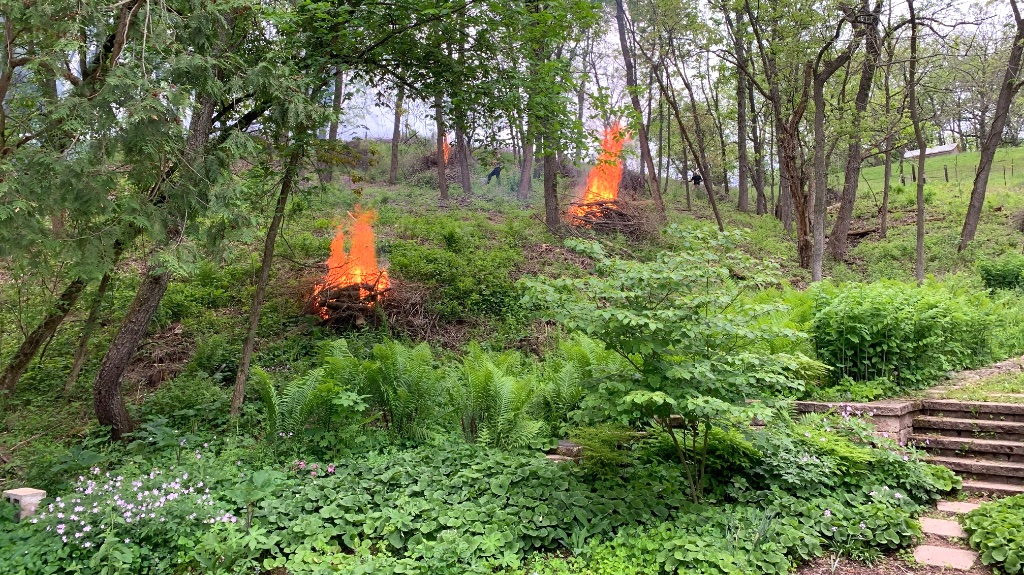 I hope that some parts of your week have brought you respite from the trials and traumas of the world around us. And I’d love to hear if you’ve done scent work with your dogs, and what, if anything, has surprised you by it.