Welcome to an ongoing inquiry about the behavior of people and dogs.
Blog Home >> Animals and the People Who Love Them >> Intake Interviews: Part II

Last week I wrote not so much about what to ask in an intake interview, but how to ask it. I promised to add the what part this week. I will, but I also want to expand on some of the things I talked about last week. Specifically, what to do about one’s observations of the clients themselves. It’s all very fine to notice that the two owners aren’t talking to each other, or clearly disagree on how to handle the dog. But what do you do with that information? As usual, the following is meant to generate a discussion as much to provide information. But, I’ll start first, with…

Obviously (and early on as noted last week), what is the problem behavior exactly? When exactly does it happen? What happens right afterward? When did it start?

What does success look like? (And I’d add, based on a great comment from last week, in what time frame?) Everyone on the same page here?

If there are several issues, which one is the most important to work on right away? (Note: Sometimes an owner would come in concerned about house training but not about the dog biting them. Needless to say, we’d have a conversation about priorities…)

General Background Questions about the Dog:

Who lives in the house? Other people, other dogs, cats, etc?

Social Interactions: Who is most involved with the dog? How does everyone get along?

What does your dog love? What is she good at? What does she know to do?

A Day in the Life: Describe her day from waking up to going to sleep at night.

When did you first get your dog? From where? What do you know about your dog’s life before you had her?

Diet: What does she eat? Not just for dinner, but for snacks, training? Who feeds her? Does she love her food?

Health: Any health problems? Medications? Who is your vet? Can I contact him or her if I think it would be helpful?

I wrote last week about the importance of observing the clients as much as the dog. Does the couple in your office ignore each other? Does one make it clear he or she doesn’t want to be there? Can the client not take his eyes off the dog?

It’s all well and good to make detailed observations, but what do you do with them? Of course, the only answer is “It Depends,” but I suspect that’s not very satisfying. Because there are so many possibilities, and it is impossible to go through them all, I thought a a case study might be helpful.

Let’s imagine: A married couple comes in with Mixie, an adult miniature poodle mix that was rescued after years in a puppy mill. They’ve had the dog for six months; she still isn’t house trained and pees and poops all over the house. If confined to a crate she defecates in it, and ends up covered in a smelly blanket of well, you know. Beth, we’ll call her, adores the dog and feels sorry for her, knowing what a terrible life she’d had before they got her. She is willing to do about anything to keep Mixie, but her husband, Stephen, is exhausted by the ongoing drama that is Mixie. He loves Beth and wants her to be happy, but coming home to a stinky, poop-covered dog has pushed him to his limits.

We have three clients here, right? The first, of course, is Mixie, who learned to eliminate where she sleeps and is just doing what she’s had to do all of her life. The second, is Beth, who desperately wants our help. But I’ll argue that right now, during the intake interview, the important client is Stephen. Unless we can bring Stephen on board, Mixie’s future looks grim. Or his marriage to Beth, take your pick. Here are some of the things I’d do to try to help. As usual, your feedback here will be invaluable.

Add in what I’ve missed! (I’ll find something right after I hit “publish”. How about a case study from you? Either your own dog or one you saw as a client. I’m all ears…

MEANWHILE, back on the farm: Well, no need to dream of a white Christmas here. We got another 7 inches or so this week, and now the thermostat has plummeted to three below at the moment (Farenheit, -19 Celsius). And breezy, so the wind chill makes it feel much colder. I’m so glad we got more snow so that all the tender underground shoots, which started to grow prematurely during our balmy November, will have some insulation.

Tootsie goes out to potty only in this weather, and is happy to run back into the house when she’s done. The Border Collies, on the other hand, appear to be almost oblivious. Except for their paws. The conversation, as I imagine it, goes something like this:

“YAY! THIS IS GREAT! (Willie always talks in capital letters.) PAW IS COLD, WHO CARES, I’LL JUST PICK IT UP. I CAN RUN ON THREE LEGS. I DON’T CARE, THROW IT AGAIN!”

Of course, I do worry about frost bitten paws, so I don’t leave them out for long once they start lifting up their paws. Here are the two BCs playing fetch with “snow appropriate toys” recently purchased. (These toys tend to stay on top of the snow… toys lost in snow create their own kind of game, but aren’t always found by any of the three of us. It’s a biological miracle how some toys can disappear under the snow!

You might think this is a nice photo of Willie fetching me a toy, but look closely and you’ll see Maggie behind him, trying to get a hold of a second toy. 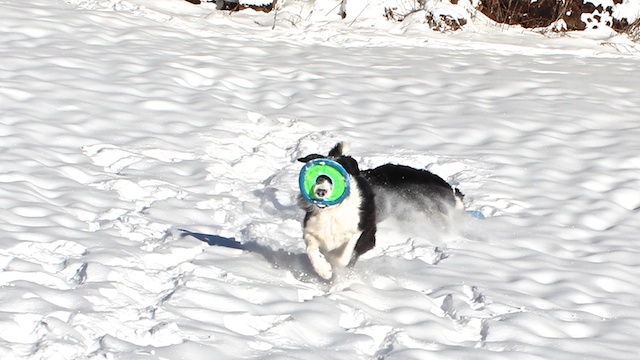 This next photo is my favorite of the batch. Willie continues to run to me while Maggie does a deep dive into the snow. 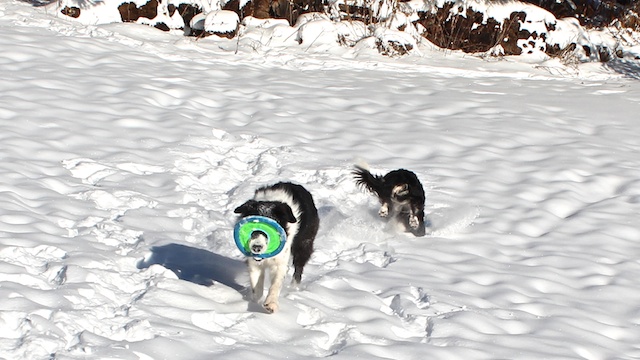 Here’s what Maggie was diving for. A bit thick for the mouth of a smaller dog, but Willie likes it unless it’s covered in frozen saliva. Then we switch to our other favorite snow toy, Kong’s Classic Flyer. It’s light and tends to float on top of the snow. 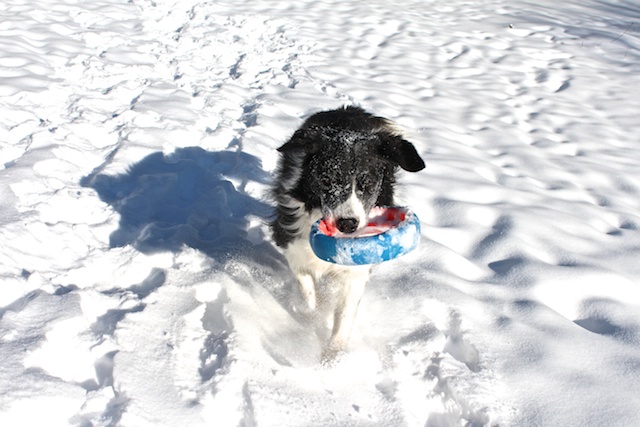 Here’s to a playful week for all of you! By the way, I’m taking the week off between Christmas and New Year’s. I’ll post some photos on the 26th, but plan to be off line from December 24th to January 2nd as much as possible. I wish you all a peaceful and loving holiday.

« How to Do an Intake Interview – Part I
Happy Holidays! »