Welcome to an ongoing inquiry about the behavior of people and dogs.
Blog Home >> Border Collies >> Interactive Toys

A generous friend just sent me one of Nina Ottoson’s interactive dog toys, and Will and I have been having a great time playing with them. Well, he plays, I watch. And, I think he is having a great time. And that’s the question for the day. Is he really? Do dogs enjoy these toys as much as we like watching them?

I thought of this the second or third time that Willie worked with the toy (Dog Fighter–an unfortunate name in this country, but probably not relevant in Sweden.). He had learned that there was food under the wooden knobs, but hadn’t yet figured it out how to get to it quickly. After pawing unsuccessfully, which only pushed the knob in the opposite direction of what would release the food, he tried to chew on the knob. As suggested in the instructions, I quietly moved my hand between his mouth and the toy to stop the chewing, and let him try again. He nudged with his nose (wrong way), pawed with his paw (wrong way) and then sat back and looked at me in the classic domestic dog’s ultimate problem solving method: “Yo, human, can you fix this for me?” (Something any respectable wolf would never do.)

It was his face that got me thinking. He didn’t look curious, or excited, or plaintive, he looked downright frustrated. I’ve seen the same look on his face when I’ve been clicker training, and I’ve seen an even more intense look, one I’d call desperate, on the faces of other dogs who are being trained through shaping. “WHAT?!!!” I imagine them thinking. “Give me a clue for heaven’s sake!”

I did give Willie a clue, I nudged the knob a bit in another direction, and although I doubt that he was imitating my action (something that is actually a complex cognitive process… that’s a blog topic unto itself) he went back to nudging and pawing and finally got the food treat.

After 5 sessions he is a whiz at it. He’s got the nudge and paw down pat, and although I don’t think he can use the shape of the slot that the knob moves within to figure out which way to move the knob, he seems to know right away that he should change the direction of his nudge if the knob stops moving. And now, his face looks relaxed and excited. Once he’s cleared the board, his face rises, as if coming up for air, with an open mouth, shiny eyes and relaxed facial muscles.

So here’s the question: How much of “working for food” is fun for dogs, how much is just frustrating? Here’s some speculation on my part. Trying to solve a problem can be frustrating, but a limited amount of frustration isn’t necessarily a bad thing. I think Will’s brief moments of frustration while he was trying to figure out the puzzle were actually good mental exercise and a good learning process. However, if the problem was too hard to solve, then I suspect that frustration can become aversive enough to be problematic. In the case of this particular toy, I think the mental exercise was truly good for him in the long run.

One last comment for today: There are SO many meaty topics I want to talk about in future posts: “Social Status and the D.. Word,” “How much time should we be training our dogs..” and on and on.  And I thought I’d run out of ideas. Silly me. (Don’t hesitate to suggest topics. I probably won’t get to them all, but I’ll try….)

Meanwhile, back on the farm: There has been a huge change in the world around us all: the weather is profoundly different. Besides being still light at 5:45 (5:45! Amazing!), there’s still lots of snow on the ground, but the temperature is over freezing every day, high 30’s and low 40’s and it feels balmy and so very very much like early spring. The Chickadees and Blue Jays are singing, the woodpeckers are drumming, the Red Tail Hawks have already laid eggs and are settled over them, belly feathers spread over the oval eggs, somewhere high in the oaks across the road. We’re all starting to talk about “mud season,” the 5th season anywhere with snowy winters. Once it continues to warm, the snow melts, the upper layer of the ground melts, but the soil below stays frozen for awhile, leading to deep, soggy lakes of brown muck that sticks like glue to your boots and covers your kitchen floor, no matter how many times you towel off your dog’s paws.

Shearing the sheep was postponed, my shearer got a job after being laid off for a year, so who could do anyting but cheer him on? He’ll be here next Saturday. I’m anxious to see the sheep without their coat of wool; it’s hard to judge their condition until they are shorn. But, sigh, they’ll still be fat, and not just because they are pregnant. We’re all a tad overweight here, but it’s a lot easier to regulate their diet than my own. They are eating the bark off my apple trees now (don’t worry, they are getting super rich hay and supplements–they really aren’t starving), but, alas, I couldn’t resist the chocolate chip cookie that Jim brought home last night. Maybe I could develop a taste for tree bark?

Here’s Will playing with the Ottoson toy: 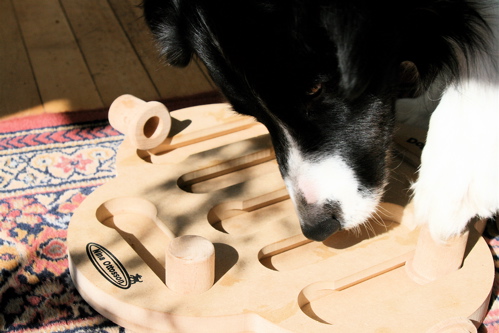 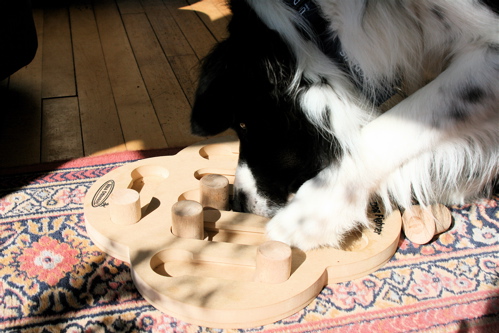