Welcome to an ongoing inquiry about the behavior of people and dogs.
Blog Home >> Border Collies >> Intervening in Tug Games: Plan A to Plan B

When do you intervene when your dog’s play becomes borderline? We all know that there is no simple answer to this question. (Except, of course… “It depends.”) I wrote extensively on this topic in May. However, the evolving relationship between Maggie and Willie continues to keep the question relevant on a daily basis. You might recall that I mentioned earlier I was quietly intervening when the dogs became emotionally aroused while playing tug. Maggie gets so excited she starts sounding like a chainsaw on steroids, and Willie sometimes gets that flat-eyed, lizard look that means he’s about to do something he shouldn’t.

When that happened I began saying, always in a cheerful voice, “That’ll Do” or calling Willie’s name to come to me. I was always happy and upbeat about it, careful not to sound like I was correcting anyone. I only did it when the dogs got so loud and excited that I was concerned it would boil over into a fight.

Because he is so responsive, Willie would immediately drop the toy, and trot to me happily, leaving Maggie standing with it dangling from her mouth. All well and good, but the result was that they simply stopped playing tug at all. I can’t tell you why–perhaps Willie felt that Maggie “won” all the time and it wasn’t fun anymore? Or that my “cheerful” calling him away really meant “don’t do that?” I’ll probably never know what caused the complete cessation of tug games, but I didn’t want them to stop playing tug altogether. Clearly I had to rethink my interventions. I decided to stay quiet and let the dogs play tug without me saying a word. After all, there had only been a few times in which one dog clearly lost patience with the other–usually Willie, and that was in their first three weeks together. Each time they had stopped when I said “HEY!” and so I didn’t feel like I was putting them at a high risk for injury.

It’s been at least a month, and Maggie and Willie are back to playing tug in the house as if they were about to fall into a pit and kill each other. And they never do. They are self-regulating beautifully. Even though Maggie’s growls sound like something out of a “Wolfman” horror movie, and Willie shakes the toy (with Maggie attached) like a terrier shaking a rat, they are doing beautifully. Who knows what will happen in the future, but for now they are better off with me butting out.

However, there is another context in which I have intervened, although in a different way. Willie, aka “The Jerk” (that’s not what I’m calling him at home, I will leave you to speculate about the term I am using), has begun playing a new outdoor game with Maggie called “Let’s Stop Maggie from Moving Forward by Muzzle Punching Her in the Face!” Wheeee! Willie thinks this is SUCH fun! And doesn’t seem to understand why Maggie has been less and less likely to want to play running games with him. I can slow or stop him by saying “Willieeeee” in a low voice, but that has the effect of also stopping super-responsive Maggie. So far the best solution Jim and I have found is to give Willie a stick or long toy to keep his mouth busy when they are playing outside. We encourage Willie to start running, and then Maggie chases him trying to get a hold of the stick. This way they run and run and run, getting good exercise and Willie stops thinking about treating Maggie like a Frisbee®. Willie seems to think that this is a great game. Maggie is killer smart, and figured out as soon as I did that this is the best way to keep Mr. Jerk Willie from smashing into her while they still get to run together.

How might this relate to other dogs? First, we should never hesitate to evaluate the results of our intervening (or not). There’s nothing wrong with trying out a (benevolent) method of handling a potential behavioral problem if you think it’s your best option, as long as you are ready to go to Plan B as soon as your first idea doesn’t have the effect you want. Nothing wrong with that. Another “take home” message here is that relationships evolve, and we need to be ever mindful and observant of what is going on at the moment. A frequent comment I heard from clients was “But he never did this before…”. But dogs change, and their relationships change, and we need to be ready to deal with what is happening now, not last week or last year.

What about you? I’d love to hear about times that you found yourself trying X and then switching to Y when you didn’t like the result, no matter what the issue you were trying to resolve. I’m confident there’s a lot of wisdom out there to be shared. I’m all ears.

MEANWHILE, back on the farm: Summer on the farm is in full swing. We spent much of the weekend fighting things we didn’t want to share the property with, including invasive thistles, Japanese beetles (argh!), and Virginia Stick Seed (double argh–this is the worst burr ever known to man and dog alike). However, we also got time to nurture desired plants like Culver’s Root and some native asters, and transplant a dogwood which was getting over run by a Hydrangea bush with visions of grandeur.

Willie and Maggie got to work sheep twice each on Friday, but Saturday was too hot and humid for them or the sheep, and Sunday was… well, Sunday I was just too darned tired, even though it was much cooler.

Here’s part of why I was a tad tuckered on Sunday: On Saturday six of us unloaded 430 bales of hay from two huge hay wagons and got it stacked neatly in the barn. The conveyer belt that you see below is called an ‘elevator’, which helps cut the work in half. Still, it takes tremendous effort. Three of us got the bales down from the wagons (an interesting physics puzzle and hard work, because the bales are jammed together like 45 pound, three dimensional puzzle pieces), and three others caught the bales as they dropped and stacked them carefully in the barn. Of course, it was during the hottest time of the day and sweat-pouring humid. I was reminded of my first night on my own as a college student in which a guy in a bar said, as we were dancing, “You sure sweat a lot for a skinny girl.” Best pick up line ever?

But oh, how good it feels to have hay in the barn! Living in the cold climates makes gathering food for the long winter both important and oh-so satisfying. Thanks to Gary, Guy, Lydia, Siri and the ever hard-working Jim for their efforts. 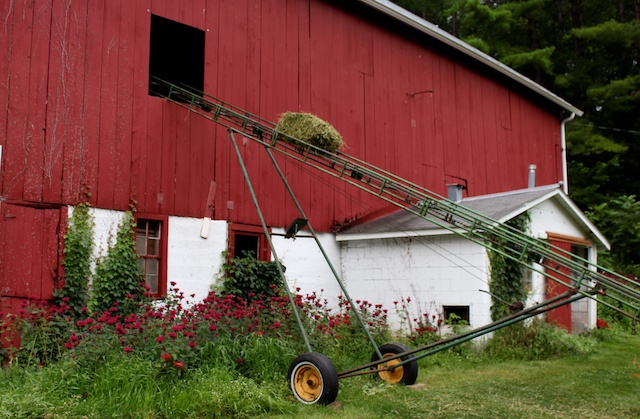 Here’s another fruit of our labors: Well, okay, not fruit, or vegetables either, just lots and lots of beautiful flowers. This used to be a veggie garden until I switched it to flowers when I was traveling all the time and feeling guilty about leaving the tomatoes or string beans rotting on the vine. Now I pick flowers for the house when I feel like it, and leave them to be beautiful all on their own if I don’t. Perfect. Now if I could just eliminate those Japanese beetles… 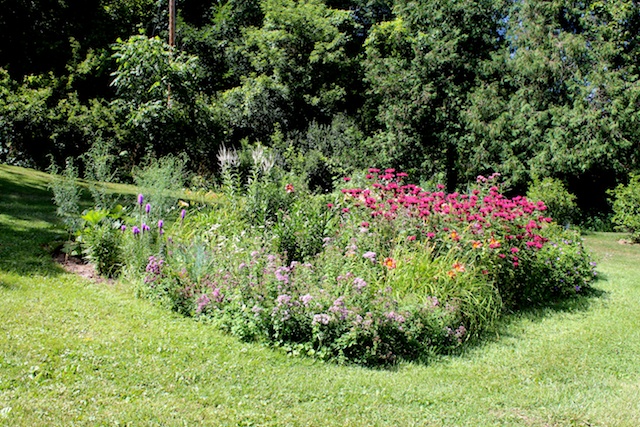