Welcome to an ongoing inquiry about the behavior of people and dogs.
Blog Home >> Animals and the People Who Love Them >> Is “Territorial Aggression” a Useful Term?

A few years ago some CAAB colleagues and I got into a discussion with some veterinary behaviorists about who could use the term “diagnosis” in regard to canine behavioral problems. The vet behaviorists argued that “diagnosis” was a medical term and could only be used by medical professionals. Mentioning that auto mechanics use the term all the time when figuring out what is wrong with a car seemed to have no effect.

Although I found the vet’s arguments illogical, I don’t use the term myself, (I use “evaluation”) so if those individuals feel a need to scent mark on a particular word, then I’ll leave them to it. However, it did bring up the point that words matter. And reminded me that I do have a problem with one popular “diagnosis” — “territorial aggression.”

According to the chapter on aggression in the vet behaviorist’s new book, Decoding Your Dog (reviewed here), territorial aggression is “Defensive aggression associated with the arrival of an intruder in or near the house, yard, car or other area perceived as the dog’s territory.” That’s a good description of the behavior, or at least of the context in which it occurs, but I’m going to argue that 1) it is not actually a diagnosis, and 2) it is not a useful term in treating canine behavioral problems.

First off, descriptions are not diagnoses. Once I had a rash on my arm and went to a skin doctor for a diagnosis and treatment. He was a grumpy old coot, and after frowning over my forearm, left the room for a considerable period of time. He finally returned and said “You have idiopathic dermatitis!” Without thinking I blurted out “You mean there’s something wrong with my skin and you don’t know what it is?” The nurse did a spit take. Call it what you will: “A rash” or “idiopathic dermatitis” is a description, not a diagnosis. Rashes can be caused by all kinds of things, from poison ivy to a fungus to an allergic condition.

Just as the word “rash” is just a description, “territorial aggression” tells us that a dog is “aggressive” when strangers come to the house or yard. (The use of the word “aggressive” begs for another post, but I’ll put it aside for now.) It does not tell us what is causing the behavior, anymore than the word “rash” tells us what was really wrong with my arm.

However, if we grant that the term tells us something about what the dog is doing, why would I argue that it isn’t useful? Because, as the individuals who wanted ownership of the word “diagnosis” reminded us, words matter. And labeling something as “territorial aggression” suggests that the dog is “protecting its territory,” when in fact, we have no idea why the dog is behaving as it is. Based on their behavior and facial expressions, most dogs described as “territorially aggressive” appear to be afraid of strangers. But being neophobic has little to do with protecting one’s territory, so why would we call it “territorial aggression” For that matter, what do we know, really, about territoriality in our house dogs? “Territory” refers to an area defended for exclusive use by an individual, but only from members of the same or similar species. Thus, wolves are highly territorial, and are even aggressive to coyotes, but couldn’t care less if a squirrel wandered over a territorial boundary. (Unless it looked like it might be a good appetizer, but no one would call that “territorial aggression”.)

But dogs aren’t wolves, and although it appears that many dogs do behave as if territorial, others do not. Most livestock guarding dogs respond aggressively to intruding canids, although we can’t say if they are protecting an area, or the livestock within it. Other dogs might as well hang out an Open House sign, welcoming any and all visitors of the same species. This variability of behavior is typical of the wide range of morphology and behavior of domestic dogs, from tiny to huge, from placid to ever alert. Domestication leads to physical and behavioral plasticity, and so we have every reason to suspect that some dogs do have a territorial imperative, while others couldn’t care less.

We also know that territoriality is dependent upon context: Cafazzo et. al. 2012 found clear evidence of territorial behavior in village dogs in Italy, while Coppinger and Coppinger found that Mexico City dump dogs only defended a few feet of a “feeding area,” and otherwise shared the space with hundreds of other dogs. If you want to pursue this line of inquiry, I recently talked about this in more depth at the SPARCS Conference in Rhode Island, which you can watch by getting a membership to SPARCS.

How should we then describe what is called “territorial aggression?” I much prefer the term “Stranger Directed Aggression,” used by James Serpell in the C-BARQ survey. It is descriptive, but makes no attempt to presume why the dog is snarling at the delivery man, or won’t let a visitor come into the living room.

I can imagine some arguing that I’m being picky. I’ll agree to that; if we are going to continue to raise the bar of our understanding of canine behavior, then words do matter. (Is there a diagnosis for people who are picky about word use?)

What about you? Do you use that term? Have you thought about it much? Any other words that you find particularly problematic? (A colleague and I discussed writing a blog on terms that need to be replaced in the dog world. The list was rather long….)

MEANWHILE, back on the farm: Right now it’s all about gathering food (this weekend I put enough local, organic strawberries for seven pies into the freezer), working Maggie and Willie on the sheep, and gardening. (Well, and then there’s work, but that’s for the section above.) Our only challenge is the heat and humidity. I’ve been working the dogs early in the morning and in the evening, but the weather is still getting to me. Yesterday there was a lovely breeze, and so I took Maggie up for one more session just before dark, but wouldn’t you know that’s just when the breeze died down and the farm turned into a sauna. I kept it short, for the sake of me, Maggie, and the sheep. Maggie and I both slurped up our energy drinks afterward in record time (Glyco-Gen for Maggie from Border Collies in Action) and collapsed together in the living room.

I’m doing my gardening in short spurts too, 20 to 30 minutes at a time, then I come in to cool off. Word has it that it might get less humid soon. Cross your paws, we could use a break. But at least no watering—we got an inch last night in yet another midnight thunderstorm and a half inch the night before. My biggest problem is mud: the soil doesn’t like being messed with when its wet, and boy is it wet.

Right now the garden is full of lilies, from day lilies to oriental ones. Here is a photo of lilies that I took this morning while the BCs were sniffing in the yard. 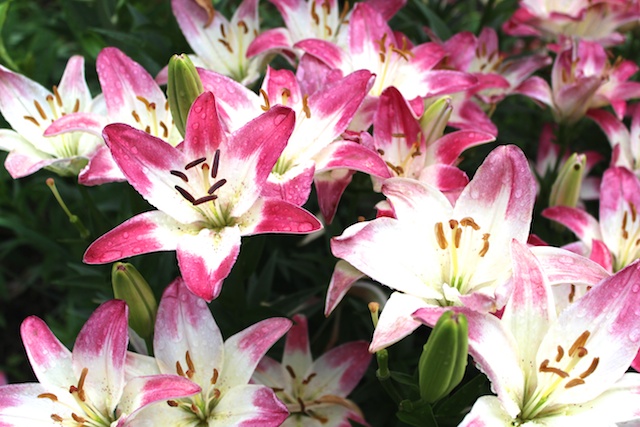 This next shot is not a lily, it is a plain ole’ annual zinnia that I stuck in for some color, but don’t you love the curly cues at the flower’s center? If I was a better person I’d look up the botanical name for those flower parts, (pollen bearing anthers?) but I’m guessing that someone out there will know the plant part name right off the bat. I hope there are some beautiful flowers for you to look at (even in winter at the bottom of the globe?) 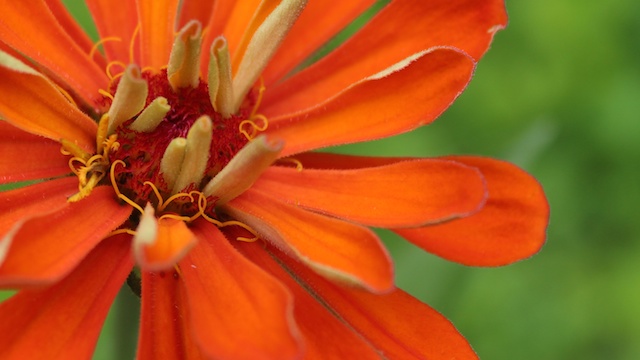