Welcome to an ongoing inquiry about the behavior of people and dogs.
Blog Home >> Animals and the People Who Love Them >> “It Depends” — The Answer, and the Next Question, to Everything

If you know my work you know that “It Depends” is my answer to 95% of all questions asked about dog behavior.

Question: “Should I intervene if my dog growls at a puppy?” Answer: It depends.

Question: “What would you do if your well-trained dog looked at you when you called him back, and then takes off running in the other direction?” Answer: It depends.

I usually say “It depends” in partial jest, knowing how useless it must sound to the person hearing it. But “It Depends” has an important kernel of truth in it, because cookie cutter formulas don’t work with animals as complicated as dogs. How to handle a behavioral issue depends on so many things: the age of the dog, the level of training, the intensity of the distraction, etc.

I heard another version of this at the Derek Fisher sheepdog clinic I attended recently, hosted by the good folks at Cedar Stone Farm. The first day Derek had me encouraging Maggie to speed up, “be bad,” get in there and move the sheep, have fun, Eeee Ha! This is good advice for a dog like Maggie (and Willie), who are, paraphrasing Derek’s words, “inherently good dogs who need to learn to be a little bad.” (In other words, to be comfortable putting more pressure on the sheep, versus dogs who need to put less pressure on the sheep.) The next day, Maggie had taken her lesson to heart. She barreled the sheep toward me on the fetch, and, atypically, didn’t lie down when asked. I wasn’t concerned, since she was basically doing what we had asked the day before (“be bad”), but it did bring up a question from me to Derek that I knew was getting into tricky territory.

How long do I ignore an incorrect response while working on helping her learn to push? Part of the answer was simple: “If you ask her to stop, then she needs to stop. But you probably shouldn’t have asked her to stop at that point.” (Obvious now, of course… but then? Not so much.) The harder question was: “Given that I am trying to teach her to love to push, what should I do when I do ask her to stop, and she doesn’t?”

This is where I would say to a client, “It Depends.” Derek’s answer, not being me, was not “It Depends,” but what he said adds a lot of depth to it. He said “Imagine that every time you have a choice about how to respond to your dog there are four doors in front of you. You can go through Door 1, 2, 3 or 4. Once through, you’ll be faced with 4 more doors. Go through door #3, and you’ll find 4 more after that. In other words, there are always a number of ways that we can respond to our dog’s behavior. Only thing is, you can’t go backwards. Once you go through Door #1, you only have its doors in front of you. What’s most important is to avoid going through one that you’ll later wish you had avoided.

I loved this analogy, in part I suppose because it presents such a perfect visual image of all the choices one has to make when training. And it emphasizes the importance of not doing something you can’t take back. For example, if one gets angry at a dog when the dog is trying to learn something new… Well, that is a door you’ve walked through, and your next options are driven by having made that choice. You can’t go back through the door of “anger” and choose another door. The other doors may or may not be perfect responses, but at least you haven’t traveled down a road on which you wish you’d never started.

Of course, the question then becomes, how do you decide which other door to go through? Well, first, since you can’t go backwards, anger is a lousy choice in just about any training scenario. Second, which of the other doors to pick depends on many things, but I’d argue that the most important is based on WHY your dog did what it did. Why did Maggie ignore my lie down whistle? There are several possibilities: She was so charged up that she truly wasn’t listening, or she was afraid to stop, or she thought going fast was killer fun and didn’t want to stop, or my whistle signal was poorly blown and she didn’t understand it. Etc Etc Etc. In Maggie’s case, it makes sense that she wasn’t stopping because she had discovered the joys of “being bad,” which is just what we wanted. It was clear that the best plan was to ignore the lack of response, but then ask for a stop later, in another context when we weren’t asking her to throw caution to the wind.

Let’s take this out of the pasture, and into your yard. What if Chester takes one look at you, ignores your recall and chases a squirrel up a tree.  What to do? Well, first, try not to go through the wrong door. Getting mad probably isn’t going to help. Don’t go through a door that is going to limit your choices and destroy the relationship between you and your dog. Rather, ask yourself why you think your dog ignored you in the first place. Could the answer be because you haven’t proofed the cue at that level of distraction yet? If so, then time for a structured program of teaching a recall with gradually intensifying distractions. Did Chester ignore you because you’ve poisoned the cue, and used it to cut Chester’s nails and give him a bath, all of which he hates? Then it’s time to go back to using positive reinforcement for a recall (or to change the signal altogether?). Did Chester ignore you because you didn’t actually use your cue at all, and instead just said “Chester!,” instead of “Chester, Come?” Time, then, to practice how you use words to communicate with your dog. Did Chester ignore you because the reinforcement you have been offering is worth ignoring a dog down the street, but not a squirrel that just ran in front of him and scampered up a tree? Better get out the chicken, or better, yet, teach Chester that you’ll give him an even better chase game if he comes to you first. (If it’s safe, that might even include releasing him to go back to chasing the squirrel.)

You get the idea. Ask yourself WHY your dog did what he or she did, use that information to train in a similar context and while mindful of not going through the wrong door. (There are lots of ‘wrong doors’ beside the ‘anger door;’ I just used that because it is so common for us to go all “chimp-in-a-bad-mood” on our dogs…) I’d love to hear your examples of answering the question “It Depends” with WHAT it depends upon. How have you used that kind of reasoning to work through a training problem?

MEANWHILE, back on the farm: Busy weekend! Lots of yard and garden work, capped it off with homemade fried chicken and a sour cherry pie from a neighbor’s tree (thank you Sandie!) while cheering on the USA team at the Women’s World Cup Finals. Yay!

The sheep got to forage in the “Play Pen,” (originally designed years ago, for Luke and his daughter to play in) while Maggie and Willie watched. It’s about a quarter of an acre, and gives me a place to put them sheep when I’m too lazy or busy to herd them up the hill. 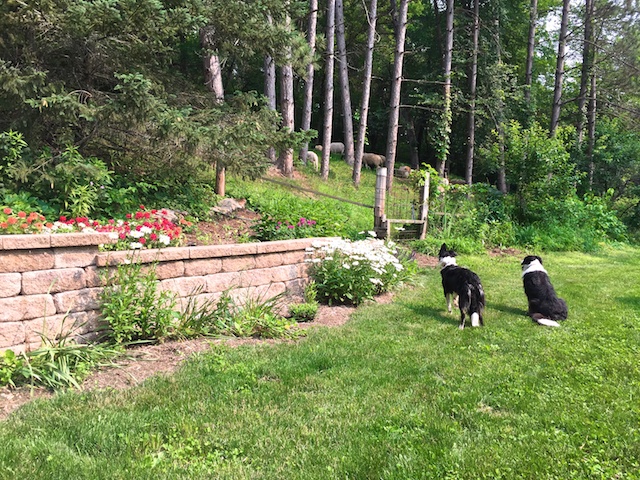 Polly and Nellie came over to watch too. They love the new stone wall, they spend lots of time up on it, while we get to enjoy watching them amongst the flowers. Here’s Polly enjoying the sun while I enjoyed her among the flowers. 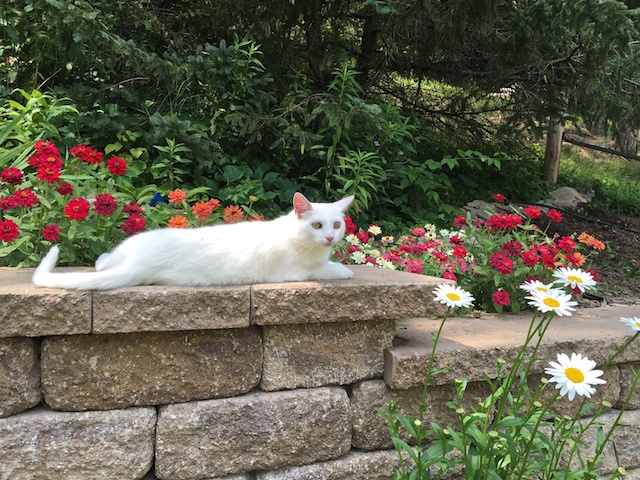