Welcome to an ongoing inquiry about the behavior of people and dogs.
Blog Home >> Animals and the People Who Love Them >> It Works! How to Stop an Approaching Dog in an Emergency 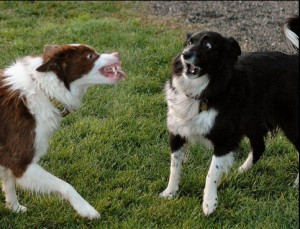 Here’s a familiar story to everyone who has had a dog-dog reactive dog: You’re out walking in the neighborhood, your own dog responsibly on leash, when you look up and there is a ___________ (pick one: Golden Retriever, Jack Russel Terrier, Black Lab, trio of Dachshunds) charging toward you and your reactive dog. Many yards behind the oncoming bundle of doom, the owner waves and smiles, shouting “It’s okay!!! He loves other dogs!!” Meanwhile, you’re not fine at all. You know your dog is not going to react well, and you know the other owner has no control over his/her own dogs, who are running toward you.

This is when you want to employ the “Emergency Sit-Stay” in which you ask your dog to sit and stay behind you while you step forward and throw a handful of treats into the charging dog’s face. I learned this simple method from Trish King (don’t miss a chance to see her in a seminar, she rocks.) Even if your dog isn’t on a stay, the shower of treats in a dog’s face often stops them in their tracks. If you’ve tossed a fistful of treats, the dog(s) will spend several minutes searching them out in the grass while you and your dog slide away. This is described in detail in the booklet Feisty Fido and the Dog-Dog Reactive DVD, but here’s a video to illustrate the effectiveness of the treat tossing.

I made this video for two reasons: One, I wanted to convince people of its effectiveness. In my experience folks are extremely skeptical that his would ever work, and I have to add, understandably so. Until you’ve done it yourself, it’s hard to imagine it really working. Second, I’ve used this method myself only a few times, and wanted to test it out with a variety of dogs. You can see it worked well with all four dogs. (Note that Tootsie was at the farm as a ‘visitor,’ just a day before we decided that she would indeed be a happy camper living with us.)

Important Caveat: This method would never stop a highly motivated, hard-charging dog who is laser focused on attacking you or you dog. In that case you need something a lot more powerful. But as you’ll see, it worked beautifully on the 4 dogs in the video, from tiny Tootsie,  to medium-sized (Nasta, a neighbor’s Siberian,) to the downright huge Dogo named Lily) and a friend’s galumpfy who-knows-what.)

MEANWHILE, down on the farm: Well, not there actually, still in Arizona after the IFAAB conference. Photos of the sunny southwest coming next week.

« From Writing to Publishing
Spring Catch Up »