Welcome to an ongoing inquiry about the behavior of people and dogs.
Blog Home >> Animals >> It’s the Little Things (Beh’l Regressions Part 2)

Earlier I wrote about Willie’s extreme and fearful reaction to a visiting man about a month ago, speculated about its causes and discussed how to respond. Here’s an update, and a few things I that might be helpful for anyone dealing with a behavior problem.

The good news (yeah good news) is that Willie is doing much, much better. He’s responded well to the last 5 unfamiliar men he’s met, running up to them immediately, getting close, asking for petting. There are no overt signs of fear anymore, (but keep reading), which makes me very happy. To quickly review, I’ve changed his diet back to avoid chicken and lamb, put his Hobbles back on when meeting strangers, gotten him acupuncture, and managed his interactions with unfamiliar men, such that he met them first outside or in the office (the house being the site of the extreme reaction). Early on I asked the men to stand back and let Willie approach them and they tossed food on the ground or handed him a toy (throwing would be ideal, but can’t do that now because of his shoulder).

Here are 3 things that this episode has highlighted that I think are universally important in all behavioral regressions:

1. Jump on it. Part of why I suspect that Willie is doing so well is that I immediately, that very day, sat down, thought out a treatment plan and began acting on it. I didn’t wait to see if it would happen again. I didn’t excuse it as being a ‘glitch’ that was meaningless. There’s not enough time in the world to list all the times I’ve heard (or experienced) seeing an agonistic pucker, or hearing a growl that seemed atypical for a dog, and then the next day, or the next week, observing the problem escalate. Example: My sweet-like-butter-to-people Border Collie Misty began to be aggressive to other dogs as she got older. I managed her carefully and things went well. I remember well a day when she flashed a hard eye at Lassie, and I thought: hummmm, I’d better get on that soon, something might be going on between them. But “soon” wasn’t that day, and the next morning Misty escalated and went after Lassie. I learned then and there that the first sign of trouble needs to be dealt with instantly. (And that worked for years with Misty: the  first sign of a hard eye got an instant response –“Misty, get back, lie down and stay there and calm down…”). If you see something that looks like it might be problematic, don’t panic, but don’t put off responding either.

2. It’s the little things (or, it’s not over til it’s over). I took Willie into PT yesterday and there was a male 4th year student in the room. Yeah Willie, he ran right up to Joe, body loose, happy faced. All’s well, right? I thought it was, until little things began to creep into my awareness. First off, Willie didn’t behave normally when we moved around the room to show Courtney how he was using his shoulder. Usually Willie responds instantly to Stand, Lie Down, etc. It’s a game with him and he loves it. He knows the room, the context and has done it perfectly a million times. But this time he didn’t lie down when I asked, (took 3 tries), and although he was focused on me he wasn’t himself. Most people would define his behavior as “disobedient.” He was, technically speaking, but I realized later it was because he was nervous with Joe in the room (or at least, that’s my best guess.) Willie also was more animated than usual, and would have been nipping at my legs if I hadn’t seen it about to happen as we walked around the room. Neither did he want to settle down for Courtney when she examined all. These subtle changes were great reminders that Willie is better, but he’s still not himself. It’d be easy to stop CCg him now and be less concerned with his internal physiology, because of his ‘happy’ reactions to strangers, but that would be a  mistake.

3. It takes a village: Most people don’t have the luxury that I do of having a blog with an amazing cast of thoughtful, intelligent readers, but everyone has someone else who is dog savvy that they can discuss their problems with. Don’t hesitate to find a good source with which to talk out a behavior problem. First, you might get some helpful perspectives you wouldn’t have thought of yourself, and at the least, it forces you to organize your thoughts about what is going on. I find writing things down incredibly helpful when I’m thinking through a problem, so try that before you talk to friends. Be aware that some feedback might be less than useful: perhaps some of your friends will respond that you “just need to be the alpha,” when you know that’s the last thing you need to be doing for your dog. Just thank them for the feedback and make mental note to talk about something less volatile, maybe religion and politics, next time with them.

MEANWHILE, back on the farm: I‘m about to jump on a plane for Florida , leaving the farm in the hands of a wonderful couple. Gotta run or I’ll miss my plane! See you in Orlando and Naples (promise to come up and say hi!). Here’s Mr. Willie boy, so happy to be able to play with toys again. 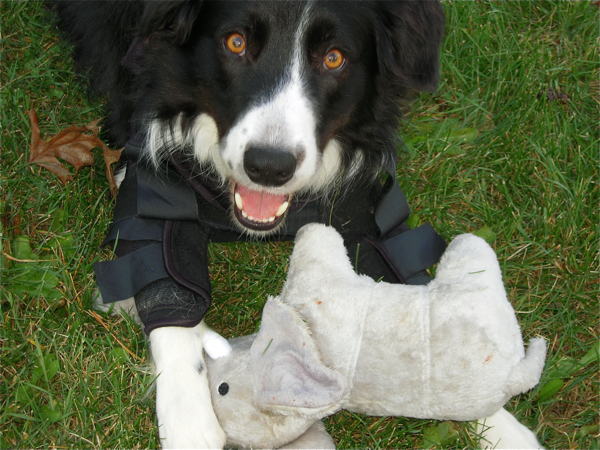