Welcome to an ongoing inquiry about the behavior of people and dogs.
Blog Home >> Animals >> Jealousy versus Fairness in Dogs Part 2, Amazing Dog Video

Your comments have been so interesting about the ‘fair’ and/or “jealous” issue that I thought I’d respond in another post for everyone to read. I’ve included some of your comments, because they add so richly to the discussion.

First off, I agree with many who’ve commented that we need to be very cautious about making interpretations from the results of this study. The bottom line is that while the dog’s responsiveness degraded, as expected, if the food reinforcement was taken away, it degraded faster if another dog was observed receiving reinforcement. That was the “inequality aversion” that the authors mentioned (and yes, I believe it was the media that added “fairness” and “jealousy.” The dogs also could receive one of two rewards, brown bread or sausage. While a similar primate study found that the subjects responded differently to a ‘high quality’ versus a ‘low quality’ reward, the dogs are described as not caring. I’m especially cautious of interpreting this result as a meaningful species difference: who knows if the difference between what the primates got was the same as the difference between brown bread and sausage? (Have you ever had real European brown bread? I’d fly across the Atlantic just to get some if I could afford it… But perhaps it is a species difference in that dogs are scavengers and many of them love just about any kind of food. One of my BC’s, Pippy Tay, loved the sunflower seed shells under the bird feeder. The shells. LOVED them. Go figure.)

Here are some of the many interesting comments re the ‘fairness’ versus ‘jealousy’ issue:

. . . in my American mind jealousy has to do with a perceived loss of interaction or affection, while fairness has to do with the inequality of reward. In this instance, and at least at first glance, the dogs seem to be refusing to work because of the inequality in earnings/rewards rather than protesting that the other dog was receiving more attention, but that’s where this study becomes very tricky…

It seemed like this was a good time to look up the dictionary definitions: Here is the result from Word Dictionary (my beloved huge dictionary is at home, I’ll look it up there over the holidays):

JEALOUS “feeling bitter and unhappy because of another’s advantages, possessions or luck.

FAIRNESS not exhibiting any bias, and therefore reasonable or impartial.

This fits a bit with what I had been thinking; Here’s my take on it: I think of jealousy as a relatively simple kind of emotion. As I said in the book For the Love of a Dog, although some scientists think jealousy is an emotion that requires “Theory of Mind,” or being able to think about the thoughts of others, I’ve always thought that it was relatively simple version of the core emotion of anger: “You’ve got it, I want it, I don’t have it, I’m not happy about that at all.” It seems reasonable to label that as a kind of frustration, which is a kind of anger, don’t you think? Note what Jennifer said in relation to that:

Jennifer Says:
My inclination is to say that the study may have been measuring something else other than the dog’s attitude in response to the other dog being rewarded…….Frustration is a far less sophisticated emotion than either jealousy or fairness (which I believe are fundamentally different from one another) and, thus, in the spirit of assuming the least complicated explanation as necessary to explain an event, I’m going to side with frustration.

So interesting… is jealousy more complicated than frustration? I’m not sure. I completely agree that ‘fairness’ is another issue. My interpretation of fairness leans toward the concept of social justice. Of course, we use the term in at least two ways: “That’s not FAIR!” a child might say if his brother or sister gets something bigger or better. Surely that’s the simplest version of ‘fairness’ but it’s hard to separate it out from jealousy or frustration. But what if one child (or dog) watched two OTHER children or dogs getting, or not getting an expected reward. Then what would they think? It seems to me that the most sophisticated version of fairness would relate not so much to how one is treated oneself, but how others are treated, according to some social code. Does that make sense? (That’s the study I’d love to see… how would a dog respond if he saw another being treated inequitably?!)

There are lots of other interesting comments, don’t hesitate to read them all in the earlier post, and add yours here or on the first one. Meanwhile, I’m not sure if Lassie’s chinese medicine veterinarian will make it out in yet ANOTHER snow storm. At least it is no longer 10 below and windy. Poor Lassie urinated in the house yesterday morning. I took her outside just to pee and she looked at me and ran to the door. It was brutal, truly. It’s been quite a winter already, and it’s not even the end of December yet. (Didn’t winter just start the day before yesterday? Geeez.)

Here’s a photo from last winter, (and we have MORE snow so far than we did at the same time last winter!) 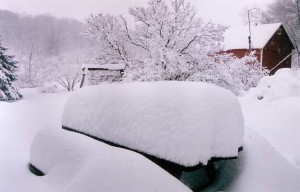 But here’s some things to warm your heart: first, Jim’s famous Christmas cookies, that we decorated in yet another snow storm last week: 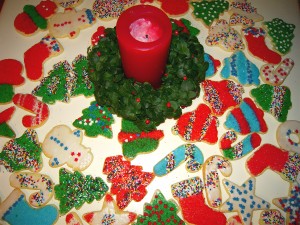 And least but not least, have you seen this? A friend sent me the url, and I can’t imagine a better holiday present to dog lovers. Here’s hoping that you and yours are able to forget about life’s troubles for a few days, and envelop yourself in love, care and gratitude. HAPPY HOLIDAYS FROM TRISHA, LASSIE AND WILL.