Welcome to an ongoing inquiry about the behavior of people and dogs.
Blog Home >> Animals and the People Who Love Them >> Just Enough Exercise to Wake Up Our Dogs?

This blog is inspired by Willie, and all dogs who are recovering from injury or surgery, who are on total exercise restriction programs. Willie spends about 20 to 22 hours a day in a crate, 1 to 1.5 hours doing passive physical therapy and the rest lying down beside me getting his belly rubbed. He goes outside to pee and poop, and otherwise I do everything I can to keep him immobile. We’ll be doing that for about 5 more weeks, and then can begin, slowly and gradually, adding in movement like 5 minutes of leash walking, or very gentle exercises that target the right muscles. He’s expected to be able to have some off-leash freedom about three and a half months from now.

That’s all background for those of you who haven’t followed the story, and it’s important because his behavior is illustrating something I’ve been thinking about for the last few years. Here’s the bottom line, followed by an explanation:

HYPOTHESIS = Most companion dogs in the U.S. get just enough exercise to hype them up, not calm them down. Here’s what leads to that thought:

1. The less exercise Willie gets, the quieter he becomes. This makes a great deal of sense if we allow ourselves to be anthropomorphic for a moment. “Couch potatoes” are warned that a lack of exercise results in a lack of energy. We are told that getting up off our duffs and getting some exercise will energize us, not tire us out. I know the few times that I’ve had to stay inactive when I didn’t feel sick, I’ve felt increasingly lumpy. Nothing like a brisk walk to wake us up, right?

Before Willie’s surgery I emphasized to the therapist and surgeon how active and reactive Willie is. How he had a tendency several times a week to leap up, twirl 360 degrees and take 2 steps forward in less than a third of a second to who knows what stimulus.  (I did not make that fraction of a second up, he can move faster than I am able to perceive, much less respond to.) The vet suggested that when he was out of the crate I lay beside him and keep my hand on his collar. I did that in February when he was less restricted, and he almost broke my hand. To keep my hand from being broken I had to flip over him like one is advised to do when a crocodile begins its death roll.

After explaining (whining?) about how hard it would be to keep Willie from abusing his shoulder after surgery, I imagine that Willie’s health care team left the office thinking “OMG, she’s just like all our other clients! Everyone thinks their dog is special and will be harder than all others to keep quiet!” I wouldn’t blame them. I did explain that out of all the dogs I’ve had, Willie is the one who has been the hardest to keep quiet. He’s just an especially reactive, high energy BC, more so than any other I’ve had. And so we had lengthy talks about how to manage his reactivity in order not to damage his healing body. They prescribed the Hobbles to keep him from extending his leg too far forward. I worked out extensive plans to use his training to keep him quiet.

Well, never mind. Willie is profoundly quiet and easy to manage. I actually think he’s a bit depressed, but for whatever reason, he is not especially reactive, and sleeps or lies quietly except when greeting me, Jim or visitors. Because visitors get him excited, he sees few of them. What gets him happy and excited are toys (all hidden), meeting new people (rare), running and working sheep (out of the question.) What’s left are belly rubs, trick training (he learns readily for treats, but doesn’t really adore the process), food treats, and being with the people he loves.

But no activity whatsoever. And he’s quiet. Really quiet. Of course, part of this is because he’s almost five years old. When he was on leash restrictions at 8 months it was MUCH harder. But not as hard as I thought it would be, and I think it’s because a lack of activity leads to a lack of energy in dogs, just as it does in people.

2. Surely the reverse is true. We take our dogs on a thirty minute walk and voila! [Aside: I once typed viola! — note the spelling difference — in a book Karen London and I were writing, and now it’s one of my favorite expressions. Try it, it’s fun to say. “VI OH LA!”] After a thirty minute walk the dogs are energized and motivated to move, learn, and interact. But wait! We took them on a walk! Aren’t we done now?

Jim and I were treated to a trail ride before a seminar out west a few years ago. We went about 12 miles, up to a mountain lake, on horse back, accompanied by two dogs who must have traveled at least twenty miles. The dogs ran at least half the time and showed no signs of being tired when we returned. Ah, if only everyone’s dog could go on walks like that!

I’ve had a number of clients whose dogs began to leap up and nip at their arms on walks. Almost all the dogs began the behavior only after the person turned and started walking back to the house. “NO NO, NOT YET!” I imagine these dogs saying in desperation, I’m JUST GETTING STARTED. The problem was usually resolved by lengthening the walks, and turning back and forth so that the dog never knew when the walk was almost over. Not to mention more exercise in general, especially mental exercise.

Mental exercise is my most common recommendation to people who can’t get their dog the physical exercise that they need. But increasing physical exercise is a wonderful thing for us all, it just takes more time than some of us have. (But it’s so good for us too!) I had 3 clients with Dalmatians who got treadmills and we trained their dogs to run on the treadmill. That’s not a solution for every dog, but it sure helped them.

I’m curious: What do you think? Do you think that many of our dogs are getting just the amount of exercise they need to wake them up (rather than tired them out? I’m not saying we should advise less exercise, heaven forbid, but that we do need to be aware that a thirty minute walk around the neighborhood in the evening is a perfect prescription for energized a dog, especially a working breed.

MEANWHILE, back on the farm: Willie and I are coping okay, as I mentioned above. I’m so lucky that he is so good in his crate, and is adapting so well. It sure will be good to see his happy face again though. Trick training provides some exercise, and he is now obsessed with food (what else is there?) but it’s not what makes him truly happy. We are spending some time when I can grab it lying outside together, me listening to the birds, him sniffing the breeze. Precious time together! We have a physical therapy appointment on Friday, and I look forward to hearing how the therapist thinks he is doing. We’ve been doing his PT religiously, although there are a few days I only managed two sessions instead of three. But his range of motion is much much better and the swelling has gone down, and at least I know that this all might lead to a life of no more pain, and no more leash restrictions ever again. And maybe, maybe.. could I dream? Frisbee? Probably not, but at least working sheep for a good long time!

It’s gorgeous weather tonight, wish I could package up a Wisconsin spring and send it along with the blog. I’m looking out the window at what must be 45 different colors of green (bright chartrouse – Sunburst Locust Tree; British Racing Green – Spruce Tree, Easter Grass green – Japanese Maple….). Tomorrow and Friday it will be hatefully hot and humid, but tonight? Sweet sweet weather! Low 60’s, fresh baby leaves unfurling everywhere, Rose Breasted Grosbeak singing his heart out. Here’s the view as I walked up the hill last night to bring the sheep down. 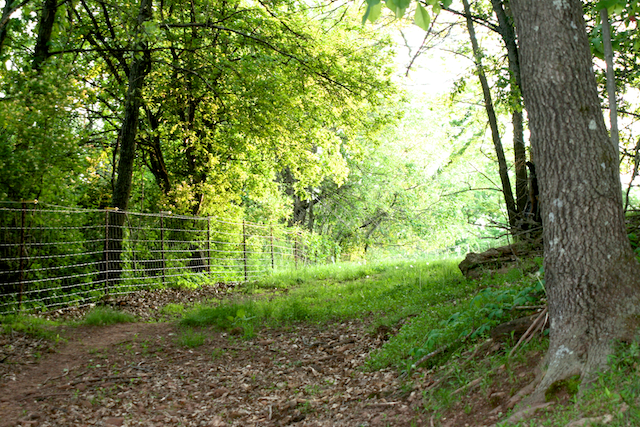 And here’s what was waiting for me. Normally I’d have Willie herd them into this area of great grass that is usually avoided by the sheep (in a little valley, close to the wood’s edge = not safe for prey animals, in their mind anyway). Jim set the fence up for me, and I lured the sheep in with a bucket of grain. Works well, except the sheep body block you, no, they actually throw themselves in front of you to try to stop you and get the grain. Much more fun with a dog, and a lot easier on your feet! (Sheep have sharp, pointy hooves. Ow ow ow when they step on your feet….) 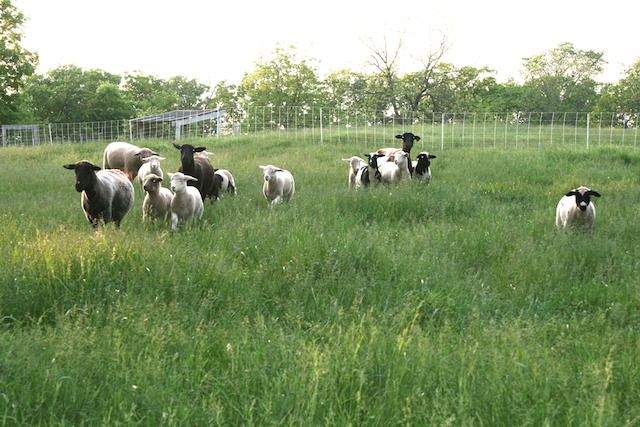 « The Mystery of the Overmarking Express
All Exercise is Equal, but is Some More Equal Than Others? »