Welcome to an ongoing inquiry about the behavior of people and dogs.
Blog Home >> Animals and the People Who Love Them >> Kiss to Dismiss?

Here’s an interesting question for you: What does a dog intend when it repeatedly licks the face of another? Muzzle licking has traditionally been interpreted as an appeasement behavior, usually done by a younger dog or a subordinate to the muzzle of another. Erik Zimen, one of the world’s experts on wolf behavior, labeled face licking as “active submission,” most often seen when puppies of both wolves and dogs lick the muzzles of their elders during greetings. (It’s not important for this discussion whether you label the action as “appeasement” or “submission”… That’s a different discussion. What’s relevant here is that muzzle licking is often done by dogs who appear to be appeasing another, for whatever reason.)

We know that muzzle licking, in wolves, stimulates the adult wolf to disgorge food it has carried in its stomach back to the litter. Younger domestic dogs also often lick the muzzles of their elders, although the older ones rarely regurgitate, thank heavens. Muzzle licking is also often seen in adult dogs, and is considered to be a sign of friendliness or appeasement in most cases.

On the other hand, Jennifer Shryock, BA, CDBC of Family Paws Parent Education, has proposed a different analysis, at least in some cases. She argues that certain types of face licking are intended to increase the distance between licker and lickee. She calls it a “Kiss to Dismiss,” and talks about it on her website as one way a dog could get someone who is pestering them to go away.

Interesting hypothesis,isn’t it? It’s reminiscent of a behavior I’ve called “aggressively obsequious.”  The best example I know is from my dog Pippy Tay, who I called “The Queen of Grovel.” Pippy greeted other dogs by throwing herself to the ground, lying sideways and attempting to disappear into the earth. She wasn’t afraid, she seemed to adore other dogs, she just groveled her way through life when interacting with other dogs. However, Pippy was smart. Really smart. And she loved her food and her chew toys. One night my 100 pound Great Pyrenees, Tulip, had a chew bone on the living room floor. Pippy began her groveling routine–she lay down on her side, thumped her tail, grinned a submissive grin and lip licked. While doing so, she pulled herself forward a few feet with her forelegs, closer to Tulip and the bone. No response from Tulip. She continue this routine until she was within inches of  Tulip (and the bone), and began to lick Tulip’s face enthusiastically. Lick, lick, lick, lick, slurp, slurp, slurp. On and on she went, as Tulip began turning her head away, first to the right, then to the left. But Pip persisted, and Tulip finally got up and walked away. You know who got the bone.

Was that a “kiss to dismiss?” Was Pippy trying to overwhelm Tulip with slobber in order to get the bone? There are lots of alternatives here: Pip could have been consciously or unconsciously licking to appease Tulip and counter balance her approach. Pip could have been licking because she was anxious about what she was doing. Pip could have been ambivalent and her push-pull motivations resulted in a kind of displacement behavior. Pip could have learned, as could any dog, that excessive licking is aversive to the receiver, and causes them to go away.

Here’s the video from Jennifer’s article for you to evaluate. In it, a dog licks the face of a young child who continually takes away his bone. I’ll preface your watching with the same cautionary notes that Jennifer adds: First, no parent should allow this scenario to play out. The dog is absolutely magnificent in his tolerance, but clearly should never be put in this situation. Second, this post is NOT about the parent’s behavior, the focus here should be on the dog. There is no value in any of us disparaging the behavior of the parents, we all know better now, and they didn’t know better then. Fair warning: I’ll delete comments about the parent, so restrict your attention to the behavior of the dog and the baby if you would.

What did you think? Did the licking influence the child’s behavior? (Admittedly the interference of the parent makes this harder to answer.) What do you think, in general terms, about the “Kiss to Dismiss” hypothesis? Have you seen dogs licking with what appears to be an excess of enthusiasm. I’m grateful to Jennifer for starting this conversation, I think there is great value in always questioning our interpretations. (If you’d like to hear three Certified Applied Animal Behaviorists talking about this and more, go to CAAB Chats and download the recording of the “web chat.”)

MEANWHILE, back on the farm: This weekend was downright balmy, in the 20’s, and we all got some good walks in the woods (except Tootise, still too cold and snowy for her). But today the high is predicted to be well below zero. And windy. That’s too darn cold for anything but going outside to feed the sheep and take the dogs to go potty, at least for me. Bless the dogs for going potty on cue. Never have I been so grateful.

It is perfect weather then, for some serious cooking. Here’s what we ate Sunday night, my first attempt at chicken pot pie. Home made crust and all,  with local, organic chicken and vegetables. Jim really liked it, and making Jim happy makes me happy. Yum. 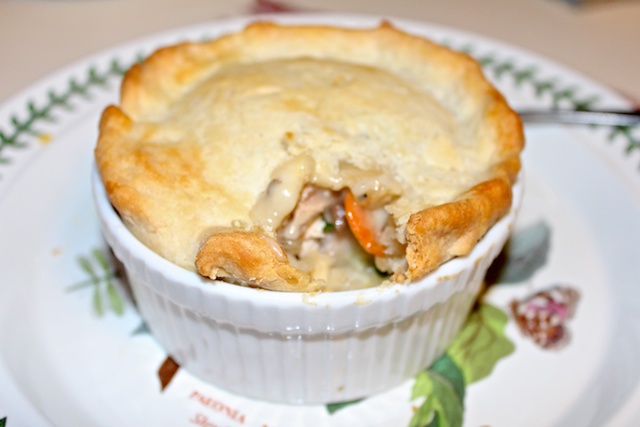 « You Were Saying…?
Adopting a Dog Into a Multi-Dog Household »