Welcome to an ongoing inquiry about the behavior of people and dogs.
Blog Home >> Dog Behavior >> Lambs and Apples, Crates and Dogs

Another gorgeous fall day. Willie and I get to move the lamb flock through the woods every morning. The lambs stay the day in the ‘orchard pasture,’ so called because it’s full of wild apple trees, and the ewe flock gets to forage in the  big, open pasture at the top of the hill. They all chomp on fallen apples all the day long, (they know the sound of a fallen apple; they run toward the tree when they hear the ‘plunk’!)

It is wonderful to have real work for Will, he has blossomed this year especially since he’s had to split the lambs from the ewes and load animals into the truck.  Rather than “practice,” this is real work and I think he knows it. I am far less concerned with him doing things exactly right than I am getting the job done, especially when splitting out the lambs or loading sheep.  Of course, we ‘practice’ every morning when we move the lambs up the hill, and when we bring the flocks back down at the end of the day–right now Will is working on maintaining a steady pressure rather than pushing a little too hard and fast or stopping altogether–but there’s nothing like Will knowing that I am counting on him to make his own decisions to get a job done.  Last week I began to ask him to leave me and the barn, run through the woods and find the sheep (who could be 3 or 4 hundred yards away, through woods and up and over hills) and bring them back down to me. He’s done it 4 out of 5 times, and I am not sure who is more proud!

Speaking of independence, I got an email recently from a Calling All Pets listener who was distressed to hear that Will spends some time in a crate. (He’s in one right now.) I am the first to say that crates can be, and are often abused, but I am absolutely convinced at the same time that crates can be used to a dog’s advantage. Will is old enough now to be left loose in the house, and I actually started doing that a few months ago. He doesn’t chew or go to the bathroom in the house, so why not?  However, I put him back in his crate when I’m gone because he behaved so differently when I came home if he had been loose. He was hyper vigilant, leaping up at every sound, barking at the slightest noise etc. This is a dog who is on chinese herbs (Shen Calmer), cooling foods and who gets lots and lots of exercise. My belief is that Will is, at least, over simulated by being loose in the house and being able to look out the window and see cars, trucks go by on the county highway. I suspect, although I know some other behaviorists and scientists would disagree, that it is more than that. One explanation for Will’s change in behavior is that if he is loose, he perceives himself as being responsible for taking care of the house. I lean toward this explanation (or both, actually), but I am aware I am just making a guess.. a guess that many would argue attributes far too much cognitive ability to a dog.

I’m curious.. What do others think?

Meanwhile, here’s some photos of the morning…

Willie moves the lamb flock into the ‘orchard pasture’,their pasture for the day. 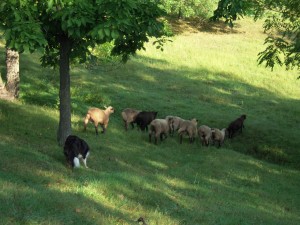 This is Dorothy, the noble elder of the ewe flock. 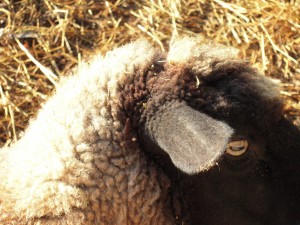