Welcome to an ongoing inquiry about the behavior of people and dogs.
Blog Home >> Cats >> Lapping up water

So how would you get water in your mouth if you didn’t have hands and a glass? Carefully watching how dogs and cat lap up liquid may seem trivial, but it’s actually a great exercise in being a good observer. As you can see in the video below, cats get water in their mouths not by curling their tongue forward, but by doing the opposite. They curl their tongues backward, and bring water up in that way, rather than making a “cup” with the top of their tongue.

When I was taping Petline for Animal Planet, the producer went crazy when I mentioned that fact. I had him slow-mo one of the videos sent in of a cat lapping up water, and showed how the tongue went the opposite direction of what we’d predict. He thought that was the most fascinating observation imaginable, and kept asking me for more great stuff like that we could use for the show. But nothing ever captured his interest as much–not micro-expressions of nervous dogs, or horses subtly communicating social status, or humming alpacas. No matter what I pointed out in a video, it was never as exciting to him as the fact that cats lap up water “backward.” Go figure.

So here’s my question of the day. Go watch your dog, and decide how he or she laps up liquid. The article attached tells us how dogs lap up water, but I’m not taking their word for it. Watch your dog, and tell me what you think. (Slo mo movie would be ideal, hey?) It seems to me that although dogs may have a species specific way of moving their tongues, the actual process is highly variable, from the dainty drinkers to the slurping water hoses.  Maybe we should have a contest for the funniest dog-drinking-video?

MEANWHILE, back on the farm: All but two of the sheep are bred now, and it’s been 17 days. That’s the length of the ovulation cycle in sheep, so either they didn’t get marked with red paint somehow or they aren’t cycling. (Or were they bred before we got it on? (Uh, I meant the paint!) Nope… we put ‘painted’ Redford before we let him in with the ewes.) Truffles and Snickers, the two that are unmarked, aren’t all that old, but both of them had problems nursing their lambs and would be culled by most farmers. However, I made a covenant with the ewes that once they are established members of the flock they can stay until their dotage as long as they are not suffering, so I may have 2 ewes without lambs every spring. That’s a big percentage of an eight head herd. Maybe they’ll be bred tomorrow cuz they didn’t read the chapter about their ovulation cycle? Cross your paws. Hooves? Whatever you’ve got…

Winter is definitely on its way now. We’re getting hard frosts at night, and 40 degree days. It’s hard to pack for New Zealand spring and early summer, especially when we’ll be backpacking for 5 days. I keep thinking about warm clothes for cold weather, and forgetting it’ll be 70 degrees part of the time. As a friend who is also going, and who also lives in a cold clime wrote: Must. Pack. T-shirts. But then, it could be 35 and sleeting . . .

Speaking of sleet, we had some of that lately. Here’s some artwork, a collaboration of leaves and Jack Frost. 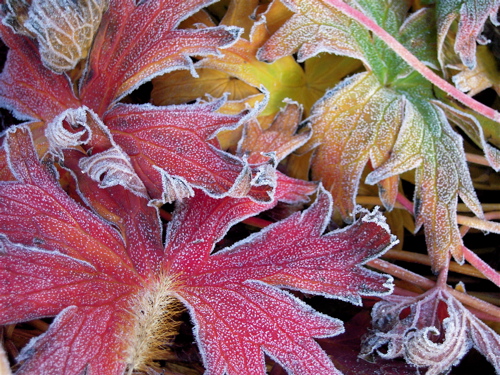 « Leaving on a Trip — without the dogs
The Plays The Thing »