Welcome to an ongoing inquiry about the behavior of people and dogs.
Blog Home >> Animals >> Leave Tomorrow!

Hard to imagine we’re on our way to Africa tomorrow. Even though it’s my fourth trip, going to Africa still seems like something I could only dream about, never really do. Of course, the only dreaming at this point is of things I might have forgotten, and worries about leaving the dogs and the sheep. It will be such a relief to finally be on the plane and let it all go. I think of trips like this as white water kayaking (not that I’ve ever done it!)… You prepare carefully and meticulously, then launch into the rapids and go with the flow.

The most fun of the preparation has been reading up on the behavior of the animals we’ll probably see. For example, I’ve been reading about the comparative social systems of Golden Jackals and Black-Backed Jackals (coyote-like canids, common in both Kenya and Botswana). Both form strong pair bonds (I remember a great sighting we had one trip of a pair of Black-Backs doing “tandem scent marking” in which they traveled in single file, and each marking the same spot about every 50 feet.) and both are reproductively more successful if their older litters stay around as “helpers at the nest,” helping to protect and feed the next litter. But it’s more common in Goldens, even though Black Backs seems to profit most if they have helpers.

The researchers note (see Estes amazing book, The Behavior Guide to African Mammals) that Black Backs are much more aggressive to each other as they mature and tend to disperse earlier and more often. It’s unclear why, but it is clear that lions and humans are their main predators, and they need numbers to help protect the young and to protect food sources from hyenas, lions and even vultures.

Although nothing is ever for sure in Africa, we probably will see quite a few jackals, and if we are lucky, some of the harder to spot canids, like Bat Eared foxes (who are terminally adorable). Whether we see African Wild Dogs in Botswana has become quite the question: The Okavango Delta where we will be staying has been inundated with atypical flooding, and the radio-collared pack that normally dens close to where we are staying has moved and is denning elsewhere. People on the ground in Botswana are being wonderful about doing all they can to facilitate our seeing the dogs, but the fact is, the only guarantee in Africa is that there are no guarantees. I sent out an email yesterday to folks explaining the situation, and so far I’ve have gotten lovely responses from a number of folks who completely understand that wild animals are just that, and that we are but visitors into their world. Whatever happens, happens.

The only thing I am sure of on this entire trip is that it will be an amazing adventure.  I’d be stunned if we didn’t get great looks at lions (although their numbers are decreasing due to the use of poison by farmers around the parks), hyenas, and probably cheetahs. Leopards are extremely common, but their success is partially due to their skill at hiding out during the day and it is not common to see them at all. However, on my first trip we actually saw a leopard leap out of tall grasses and kill an antelope, then drag it to a tree. (That was on the way to breakfast, right outside of the lodge we were staying at. Oh my.) I can pretty well assure everyone that won’t happen again, but that something equally amazing probably will!

By the way, I MIGHT be able to get on-line and post from Africa on occasion, and I would love to be able to keep up with your comments, so keep them coming. But no promises, internet connections are tenuous at best when on safari, and you just never know. However, I have written 5 posts to appear when I’m gone, and I hope you enjoy them. Many of them have photos from previous trips to Africa, so in some ways I’ll be keeping you updated. . .

Meanwhile, back at the farm: The flowers are especially beautiful right now, in part due to an atypically cool and wet summer. It is heaven for heat-haters like me and Willie, and for crops like alfalfa and flowers like roses and bergamot. The berries just never stop, and I just can’t stop myself from making a mixed berry pie every week. Here’s berries in the bowl, with Tapioca and sugar, waiting to be dished into the pie shell. (And oh yeah, it’s long gone by now!) No more pies for awhile, but the food on safari is absurd… the tent camps (do not think pup tent, think hardwood floors, bathrooms and gorgeous linens!) put out feasts three times a day. I expect to come back looking like a strawberry (red from sun burn and round). 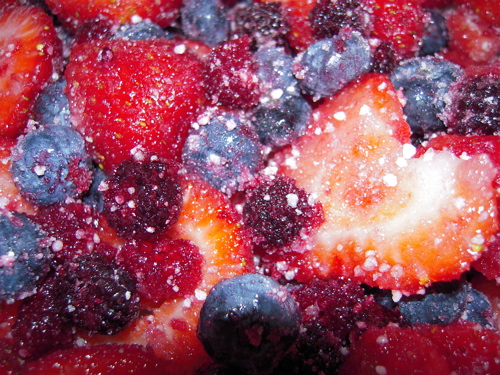 And here are the ones who make it incredibly  hard to leave. Truth is, tears will flow as we drive away. I have my own version of separation anxiety when I leave the farm and the dogs. Once I’m on the plane I’m okay, but the first fifteen minutes is just awful. It gets bad again after about a week… no matter how wonderful it is I will start yearning for Will and Lassie. I’ll miss Sushi too, but to be honest, it’s not the same as missing my dogs. I feel guilty saying that, but I suspect Sushi would say the same thing; she’ll miss us, but nothing like Lassie and Will.

Do not think the dog’s postures in the photo below suggest that they know I’m leaving and are sad. There’s no question Lassie knows I’m leaving soon on a trip, but in this case they were just bored to tears with me trying to get a picture! But foolish as it is, I can’t stop myself from telling them (as if they read the blog!):

Be safe my friends, I’ll miss you more than I can say. 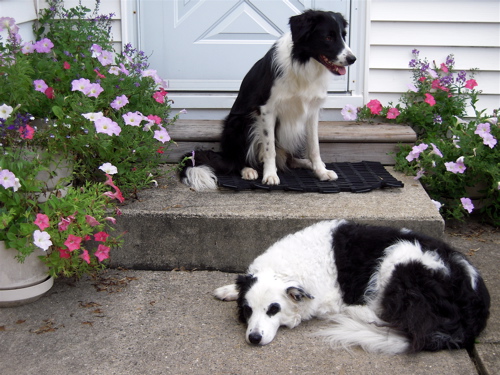