Welcome to an ongoing inquiry about the behavior of people and dogs.
Blog Home >> Animals and the People Who Love Them >> Less is More (When It Comes to Training)

When I first started seeing clients, I felt a need to send them home with as much information as I possibly could. How could I deprive them of all the things that they could do to help their dogs? Because I knew that people only remember a relatively small percentage of what they hear in one appointment, I wrote a number of booklets over the years for them to take home and read. The Cautious Canine, Feisty Fido, and I’ll Be Home Soon, for example, were all written as supplements to the information I covered in my early sessions with clients.

But there was always so much more. Dogs who were reactive to other dogs on leash were confused by the owner’s lack of consistent cues. Fearful dogs needed more than classical and operant conditioning when strangers arrived; they needed to live in a family that provided a sense of security, not one of “dominance”. Dogs with separation anxiety had virtually no idea what the owners meant when they said “sit,” and that added to their general anxiety.

So much to teach and so little time! I’d would do my best–explaining that we needed to work together more than one time; sending them home with booklets and handouts, appropriate toys and/or training tools. However, as the years went on, I began to hone down what we covered in the first appointment. Just doing a good intake interview is tiring for everyone. It often took a half hour, or even longer, and after that one could see that the humans in my office were already getting tired. I had asked them, after all, no small number of questions that took a lot of thought to answer. “When did the problem first begin, just even an inkling of it?” “What exactly did you do in the 30 seconds after the first bite two years ago?” “What would “success” look like?” (Side question for blog readers: Would you like me to write a blog sometime about what I’d ask in interviews, and how I’d ask it?)

Thinking through the history of a behavior problem takes a lot of mental energy, and it doesn’t leave a lot left for learning new things. That is why many practitioners ask people to fill out a questionnaire before the appointment. There is a lot of value in that, and I too sent out forms and asked people some general questions on it. But I prefer asking many of the questions in person. First of all, the interchange between us often led to discoveries. (“Oh, that’s right! I forgot… He didn’t start growling at dogs at the dog park until after that big brown dog slammed into him at the front gate.”)

In addition, it gave me lots of time to observe the dog’s behavior, and the relationship between the dog and his owner. Did the Ginger the Golden obsessively sniff the carpet for an entire twenty minutes before settling down? Did Marco the Mastiff avoid looking at his owners’ faces? There is a lot to learn about a dog and his relationship to his owners (and vice versa) in an unstructured, new environment, and I never wanted to lose that opportunity.

That is why I never wanted to rush the intake interviews, and why I  settled on going over just a few things for our first appointment. Usually it boiled down to sending them home with 1) Practical solutions for dealing with the problem for the next two weeks–often management, not cure, 2) A handout or booklet explaining how to treat the problem. I would ask them to read it before our next appointment, but not necessarily begin working on it until we met up again and I could go over it in person and, perhaps most importantly, 3) a cue, practiced in the office, that gave the owners the feeling that they really COULD influence their dog’s behavior. It always was based on positive reinforcement, and it always was something I knew that I could teach quickly. Of course, it varied, depending on the dog and the problem, but my favorite was “Leave It.”

“Leave It” usually had nothing to do with the behavior problem directly, but indirectly it had everything to do with it.  The owners often perceived that they had no control over their dog, and felt helpless and frustrated. The dog had often been punished for doing something wrong, but had no idea what “right” was. In addition, the dog often suffered from a lack of emotional control, and learning to control her impulses to get what she wanted was a skill that would come in handy, no matter what the problem. The owners would come back to their second session feeling empowered (“I can stop my dog from eating food right in front of her! Wow!), learned the value of positive reinforcement, and the dog learned to trust her owners and develop a modicum of self control. Win/win/win.

[By the way, I describe how to teach “Leave It” in Family Friendly Dog Training. I put food in both hands, one treat being MUCH better than the other. I’ll present the hand encasing the less attractive food, and wait for the dog finally give up sniffing it and turn her head away.  When she does, I bring my other hand forward from behind my back and let the dog eat the tasty snack. The dog learns that turning away from something she wants leads to something even better. FYI, Sophia Yin made a great video that includes how she teaches the cue, although it’s a bit different from my method.]

I see that this post is getting a tad lengthy, and in celebration of “Less is More,” I’ll turn it over to you. If you are a trainer or behaviorist, what is your experience? What about those of you who had an appointment or taken a class? Have you been overwhelmed by too many ideas and instructions? Or the opposite–did you leave an appointment or a class wanting more? I look forward to the conversation.

MEANWHILE, back on the farm: We all met a new friend this weekend, Disa, an eight-week old Lab/Shepherd mix owned by a friend. 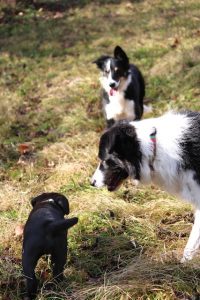 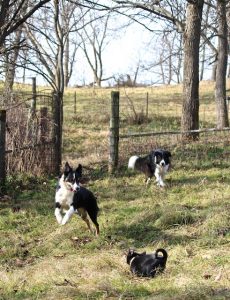 After first meeting Tootsie, who did her usual “Hello” sniff and then paid her no more attention, Disa got to meet Maggie and Willie. After appropriate greetings by all, Disa and the BC’s went up the hill into a fenced area where we all went on a walk.

Maggie and Willie were fascinated by Disa, and tried repeatedly to get her to play. However, they also seemed to understand something about her fragility, because they spent a lot of time just watching her. 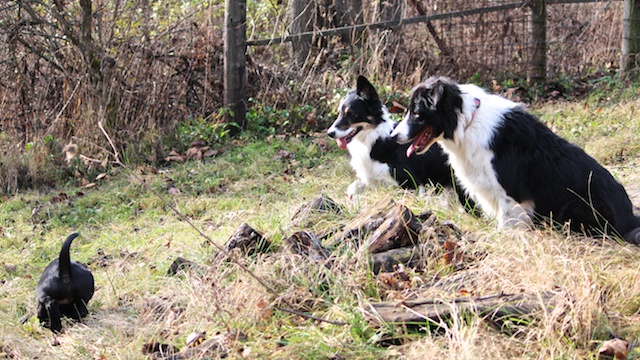 In this next photo, Maggie looks like a coyote about to ‘forepaw stab’ a field mouse. If all I saw was this image, I might be a bit, uh, concerned. 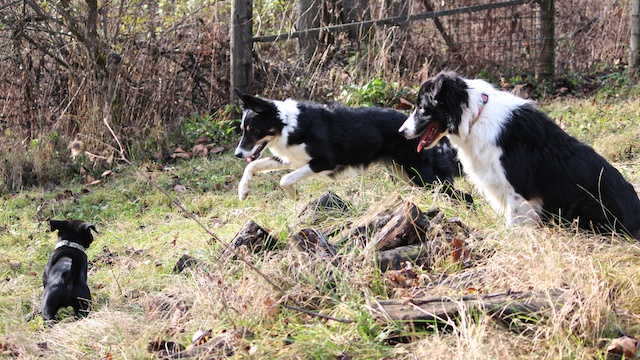 But Maggie has great social skills once she’s met a dog, and she clearly went out of her way to avoid hurting Disa and get her to begin to play. 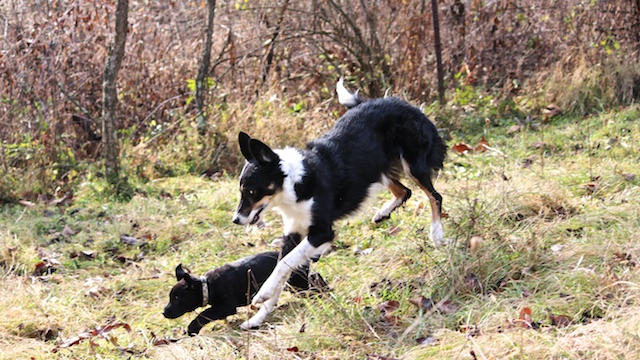 Disa began to make short bursts of play-runs that were too endearing for words. She began to run toward the BC’s and then away. Not much, and not for long, but she’s so young yet I’d expect nothing more. Overall, I can’t imagine how it could have gone better. Thanks to Kira for bringing her over–no question these dogs are going to be great playmates as Disa matures. Yay!

« Thankful (and Not Thankful), 2016
Well, This is Awkward: Christmas Book Ideas »