Welcome to an ongoing inquiry about the behavior of people and dogs.
Blog Home >> Border Collies >> Lessons from Herding Dog Trainers

Ah, lucky me. Last week I had two half hour lessons with Alisdair McRae, who I used to call “the Tiger Woods of Herding,” but well . . .  you know. Alisdair won Open on both Saturday and Sunday at the Portage Trial this weekend, which is pretty much par for the course with him. He is also a clear and kind teacher, and he understands herding dogs as well as anyone in the world.

I write this because my lessons reminded me of the universal importance of creating a win for our dogs, and the universal difficulty in always knowing how to do that. I wanted to work on my timing; Willie and I are doing nice outruns and fetches, but our drives look like zig zags instead of the lovely straight lines we are all attempting to achieve. I felt like I was always one step behind, and never able to react fast enough to turn the sheep back to where I wanted them to go.  Alisdair said the problem isn’t your timing, you just need to slow down the pace. Miracle of  miracles, in a few minutes Willie and I were doing so much better, but not just because we had slowed the sheep to a walk, but because Alisdair had made it easier for both of us.

But it’s not always obvious how to break something into manageable pieces, is it? I knew to try short drives with Willie, but it never occurred to me to help my own brain with creating an alley-way, and the drive that Alisdair created was much shorter than I had been attempting. I drove home from the lessons thinking about the universal application of “setting our dogs up to win.” (And us too.) I’m curious now: Is there something that you’ve been working on that would profit by backing up, making it easier for you and your dog? Or do you have a story for others to help them find ways for both them and their dog to win? (I’ll be you do!) I’d love to hear ’em.

MEANWHILE, back on the farm: I saw Hope this weekend at the Portage Herding Dog Trial, and it was wonderful. First off, neither he nor Willie barked or lunged at anything, not a thing. Hope was a happy little puppy and Willie greeted dogs and people alike beautifully. You would never know how they had been behaving weeks ago. Secondly, Willie wanted nothing to do with Hope. I was amazed at how clearly he expressed this: he sniffed Hope, Hope put his front paws on top of Willie’s shoulders, and then Willie turned his head as if to ignore him completely. Willie would not turn his head back in Hope’s direction after that or even to sniff him the next time they met up. Hope was happy to see me, and I loved seeing him, and then he was equally happy to go back to his new humans and lick their faces. I left feeling thrilled about how the two dogs are doing.

I also loved watching the Open runs. What these handlers and dogs are able to do is ridiculous. The outrun is 450 yards long — imagine asking your dog to listen four and a half football fields away. Here’s Alisdair and Star, beginning their winning run of the day. (And yes, those tiny little dots are the sheep, and they are actually almost halfway through the fetch!)

Star never took her eyes off the sheep, and never stopped listening to Alisdair. 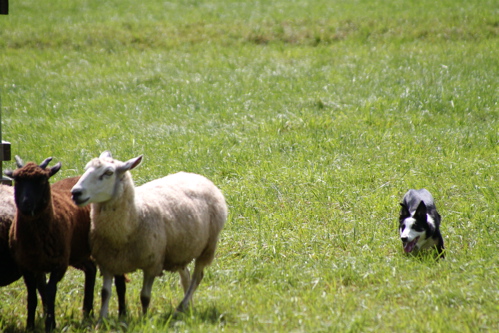 After the fetch, the sheep are to be turned around the handler, as tight as possible, to begin the long drive and cross drive. This looks easy when you watch the pro’s do it, but believe me, it’s not.

Here’s the split, in which half the sheep are split off from the others, and the dog must come in and hold them apart until the judge is satisfied that the dog  has control of the sheep. Midwestern sheep are notoriously difficult to shed: They are not afraid of humans and they learn fast to cling to us like velcro. They clump in a tight bunch and it’s hard to create any kind of opening for your dog to move into. Alisdair is one of the few handlers that got a split on Sunday. (Agility handlers: Notice how Star’s head is turned toward the sheep that Alisdair’s feet are directed toward? Sound familiar?) 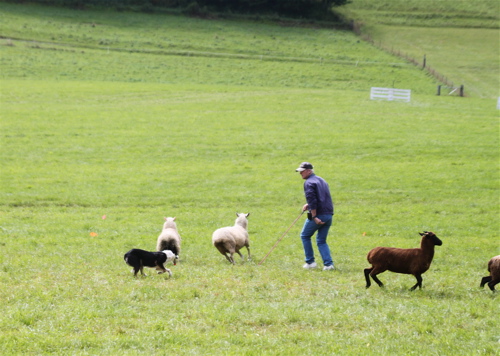