Welcome to an ongoing inquiry about the behavior of people and dogs.
Blog Home >> Border Collies >> Life is One Continuous Mistake

Those are the words of Dogen Zenji, a Zen master, quoted in one of my favorite books, Zen Miracles by Brenda Shoshanna. I repeat them here, because I think they have the power to ease life’s journey for all of us. The message is simple, but profound. Of course you, and everyone around you are going to make mistakes. It is inevitable, because, as the saying reminds us, “Life IS one continuous mistake.” Once we accept that, it is much easier to be loving and compassionate, both to ourselves and to others.

When I first became interested in dog training, in the mid-80’s, I was shocked at how hard people were on their dogs. “Disobedience” by dogs was considered to be a direct challenge to a dog’s owner. Any time a dog responded inappropriately it was attributed to the dog being stubborn, or challenging the owner’s dominance, or worse, “having a mind of his own”. (I admit to being unable to repress a smile when I write that last one. Whose mind was the dog supposed to have?) Dogs who didn’t sit fast enough were at best given a quick, mild collar correction, and at worst yelled at or picked up and shaken. Dogs were not allowed to make “mistakes” and if they did, they were punished for it.

Thanks to the efforts of many wonderful people, from Ian Dunbar to Karen Pryor to William Campbell, much of dog training has become less like boot camp for marines, and more like a good elementary school for kids. And yet, as we became kinder to dogs, it seems to me that some of the anger, frustration and negative attributions have been re-directed toward our own species. I read about “they” all the time, the people who don’t treat dogs as they should, who dump them at shelters, who use abusive training methods or who make bad decisions that cause harm to some individual of some species, sometime, somewhere. So many mistakes. Bad people, bad people.

Part of why I wrote The Other End of the Leash is because I like people, and I wanted to help others understand more of “why we do what we do around dogs.” (That’s the subtitle, fyi.). My hope was that increasing our understanding of the behavioral predispositions of both species would make life better for us all, humans and dogs.

And so I bring this around to the topic of the hour on this blog, the issue of re-homing dogs in general, and of placing Hope in another home specifically. Every day I make a mental list of what I am thankful for, and one thing I am thankful for is the thoughtful conversation that this chapter in my life has stimulated. I am thankful for the compassionate words of support, and I am thankful for the criticism, because it forces us to carefully consider our beliefs and our decisions. I knew when I made the decision to place Hope that it would disappoint some people and anger others. I am especially thankful, and impressed, by some of the most insightful comments: that perhaps placing a dog in another home brings up deep-seated, personal issues of belonging and a fear of rejection and of failure—no wonder this is a hot button topic, yes?

I understand that it would have been more satisfying to many if I had kept Hope and worked through all of his and Willie’s issues. It would have been to me as well. I understand that some readers believe that I made mistakes along the way. One interesting aspect of “Life as a Continuous Mistake” is that for any given situation, each person evaluates a stream of decisions differently. A mistake to one person is not to another.

Look at all the choice points involved in my decisions related to Hope:

– Deciding to get a puppy 4 years ago when I had 3 very old dogs because a litter related to my soul mate dog, Luke, became available

– Choosing Willie from the litter

– Deciding to get another dog after Lassie died because Willie loves to play with other dogs and I’d like more than one myself.

– Choosing the puppy Mick out of the litter

– Deciding to let Hope go to another home

– Choosing to write about it in public

I wrote out that list to point out that everyone has their own opinion about what decision or choice might have been a mistake. Some of my colleagues, years ago, counseled me to get rid of Willie, and with benevolence and care for my well being, told me I’d be sorry for a very long time if I didn’t. Many of them think I am raving mad for writing about my own dogs in public. Others think getting a puppy was a mistake, or not getting a dog from rescue, or choosing the pup I did, or taking him back, or not taking him back sooner, or, or …

Here’s the reason that I bring this up. If I could live this summer over again, I might have made some different decisions. I might not have, it’s too soon to say. The one decision in particular that I would revisit was when I had returned Mick to the breeder and was agonizing over whether to choose another from the litter, or drive home without a puppy at all . While I was struggling with the decision, admittedly both physically and emotionally exhausted, Willie met Hope and instantly adored him. Willie took one sniff, and circle-wagged, and then play bowed and the two of them frolicked on the grass like Willie and Lassie used to do. As I stood watching them, it was windy and wet, and brutally cold, and I had to decide right away what to do or lose the chance to take a pup. Willie’s reaction to Hope (very different from his reaction to all the other puppies) had a profound effect on me. I picked up Hope, and he flattened his ears and kissed my face and Willie circle-wagged again and that was that.

A mistake? Could have been. I’m not sure yet.  Was it a mistake to place Hope into a better home than mine could ever be? Nope. Absolutely not. At least, not in my opinion. But perhaps in yours.  And that’s okay, because, after all, Life is One Continuous Mistake. I will always make them, whether we agree on what exactly the mistakes are or not. If someone needs perfection from me, they are benevolently advised to go elsewhere.  I cannot carry that burden for you, and I cannot try to carry it for myself.

And that brings us full circle to the most important point of all. Benevolence. Most people do the best they can. Yes people do things that disappoint us. Yes others will do things that we consider to be mistakes. Yes some people do horrible things to dogs, not to mention to other people. But the more we can feel compassion for other people, as much as we do for our dogs, the better off we will all be. Over the decades that I have been in the dog world, I have seen so much anger about the behavior of others, and so much guilt from wonderful people about decisions they have made with the best of intentions. If only we could gather up all that negative energy we could power the world on it. But in my humble opinion, it’s not what the world needs right now, and it’s not what each individual within it needs. Listen up here: It is not the behavior of others that is hardest to forgive, and if we focus on that we are fooling ourselves. It is our own imperfections that are hardest to forgive. What a challenge it is to feel love and compassion and forgiveness for ourselves, and for all of the mistakes we each make. And yet, we are the only judge of own behavior that really matters. Life is One Continuous Mistake. If we do our best, with the best of intentions, and try to learn from our inevitable mistakes, then all we can do beyond that is to sit back and enjoy the ride.

MEANWHILE, back on the farm. It is cool and gorgeous and the horrid, hot, humid weather is behind us, at least for now. The country is a canvas of yellows: bright yellow gold finches are everywhere, butter- colored sunflowers line the country roads, and streams of goldenrod wave in the fields.

Willie and I got two glorious lessons with the best herding dog handler in the country (Alisdair McRae) yesterday, and had as much fun as it is possible to have. For those of you in Wisconsin, there is a great herding dog trial going on right now,  Friday through Labor Day, outside of Portage Wisconsin. You can learn more about it by going to WWSDA.

I wanted to get some pictures of Willie and I working with Alisdair, but I got lost in training rapture, and forgot that I had the camera in my pocket. But here’s are some scenes on the way home… no wonder the colors of the state’s football team are green and gold. 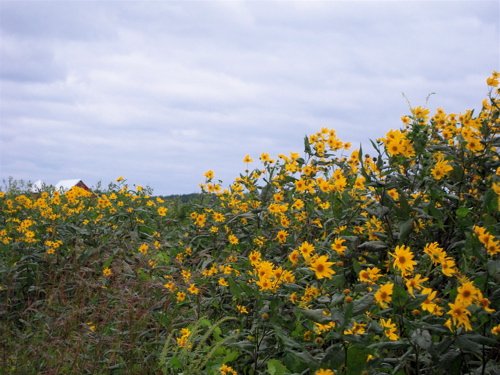