Welcome to an ongoing inquiry about the behavior of people and dogs.
Blog Home >> Dog Behavior >> Lost Dogs

I’m inspired to write this after crying over the happy ending of a lost dog saga. A Golden bitch, who had been rescued from a hellish life in a puppy mill, had escaped from her new home and run into the woods. She was friendly and loving to everyone when she was in her foster home, but once she took off she became terrified of human contact. She was spotted numerous times, but ran off every time she saw someone, even from familiar dogs and her new, beloved human. The story reminds me of the time that I lost Tulip. It was only for nine hours, and it was one of the worst days of my life. She was old by then, with a severely weakened hindquarters, and I knew she’d never go running in the deep snow voluntarily.

After hours of searching the woods in a snow storm, calling and stopping at neighbors, we found her late at night, having slid partway down a small cliff, wedging herself between the ground and a large branch. We would never have found her if it hadn’t been for dear, wonderful neighbors, who thought they heard her barking and led us to where they thought she might be. We trudged through deep snow in the pitch dark, ears straining to hear something that might lead us to her. All 4 of us stopped cold when we heard a deep bark floating from the woods. “There she is!” someone said, and I began to cry. Not from happiness, because it wasn’t her. I knew her bark, and it wasn’t her. It was 10 pm and my frail, old dog was somewhere in the dark and the snow and the storm and the bitter cold and it wasn’t her. And then, moments later . . . I could cry remembering it, we heard a second bark. “TULIP!!! That’s her, I KNOW it is!”

We scrambled into the pitch dark woods, still unsure of where she was, and how to find her. Brambles tore at our clothes and the snow fell from branches overhead and melted down our necks, but we had heard her, and nothing was going to stop us from looking more. It was Jim who found her. His flashlight found two glowing eyes… maybe a raccoon, maybe a possum, but no, wait… it was big and got whiter as we approached, and there she was, stuck like a puppy put into a Christmas stocking, held fast by a fallen tree to the side of a steep creek bed.

It took almost an hour to extract her off the steep, slippery slope, and get her back to the farm. She had most likely been pinned, immobile in the bitter cold, for almost nine hours, and she couldn’t move her back legs. She couldn’t walk unaided for a week, but she slowly gained her strength, and graced the farm for another year. I will never forget the nightmare of that nine hours, and can barely imagine what it is like to lose a dog for three weeks (or forever).

I know not all stories end as happily as Tulip’s or the Golden who was found after extensive searching (by over 50 people!) this weekend, but I thought it was a good time to mention some things I’ve learned about finding lost dogs. I hope you all can add to the list, in hopes it will help some one down the line.

If a dog is missing:

First, ask what kind of dog is missing? According to Kat Albrecht, who wrote the highly recommended Pet Detective, lost dogs fall into three categories: highly gregarious ‘wiggle butts’ who go to the first person they see, aloof dogs who were never comfortable with strangers and avoid them until starving or weather stressed and “xenophobic” dogs, who are afraid of new things. Often, as was the case with the Golden, these are dogs who were not given healthy puppyhoods, and freeze and panic in new situations. Once scared, they won’t come voluntarily to anyone.

This describes the Golden who was just recovered. She adores people, once she is comfortable, but typical of this group, she ran from everyone who was trying to help her (even familiar dogs.) She was eventually recovered only because a large group of people canvassed the area, alerted everyone within miles, kept careful track of sightings, put food and clothing with familiar scents out and used live traps baited with food and familiar clothing. She was found, sleeping soundly, in a live trap over the weekend.

I’ve seen several cases like this, in which even dogs who were well-socialized become disoriented and don’t respond as you would expect. One client had a Husky who traveled 30 miles in one day, and avoided everyone who tried to call him until he got to a farm with a lot of other dogs. He was spared from being shot as a coyote only because the person at home called her brother to come kill him, so that she didn’t have to. Once he arrived, the ‘coyote’ was identified as a dog, and they managed to confine all the dogs in the barn. Albrecht says that country dogs tend to travel much further, city dogs stay closer by, in part because of highways and fences. (By the way, she also says that ‘outdoor’ cats vanish because something happened to them.. they are most likely injured or trapped. ‘Indoor cats,’ on the other hand, rarely go far, and are most often found close to home, usually hiding silently somewhere within one or two houses away.)

Here is what I know to do if your pet goes missing (please add to the list if you like):

1. Tell everyone. Go to every house, post signs everywhere, tell the delivery men, the vets, shelters within 50 miles… every one. And don’t leave it to just one visit, don’t hesitate to go back a week later with a new flyer (with a phone number to call)… lots of people will throw the first one away.

2. Put out live traps with food and clothing that smells like you. Check them relentlessly. This is how the Golden was finally captured. This is especially useful in country areas and for dogs who become shy once they are lost. Do not think you can predict how your dog will behave once he is lost in the woods… I’ve seen some amazing transformations.

3. Do not count on your dog to bark or your cat to meow. Jim and I had walked within 50 yards of Tulip hours before we found her, and she never made a peep. While we searched, I had felt sure that she would bark.. she was a Great Pyrenees for heaven’s sake, and she barked more than any dog I’ve ever had. But I hadn’t thought about the context of her barking. She never barked for attention or when she was playing. She barked at deer across the road, when she heard other dogs bark (which is how we found her), when cars drove up and when the coyotes howled. Her barks were alarm barks.. ALERT ALERT! but they were never made to get our attention to play, get food or be petted. I was completely surprised that she didn’t vocalize when we walked past her (she HAD to have heard us, we called ’til we were hoarse), but it makes sense now.

I had a cat, Ayla, who was badly injured by a stray cat and crawled under hay bales to die. By the time I got back from out of town she’d been missing for days. I searched the barn that night and morning, and thought I had heard, each time, one quiet, tiny meow, but nothing else. Pippy Tay found her… as I cried in the barn that morning, sure my cat was somewhere dying in the barn, I said “Pippy, where’s Ayla?” I didn’t expect anything of Pippy Tay, I was just asking for sympathy. But Pip turned and began to dig on top of a 10 foot high pile of hay bales. I found Ayla under 400 bales, almost dead from dehydration and an infected shoulder. Albrecht says that is typical of cats. If they are injured, they go to ground and remain silent, so don’t call for your cat expecting her to call back.

4. Don’t give up. Be relentless. One client’s dog ran feral in the woods for an entire Wisconsin winter, and was captured in spring. He went back to being a happy house pet without a hitch, even though he had been surviving on his own for months.

And, of course, there’s prevention, but that’s another topic. I’ll leave it for now at ID your pet! and look forward to hearing your stories and advice.

And how can I resist adding a photo of Tulip… suitably attired for a Christmas card of years ago? 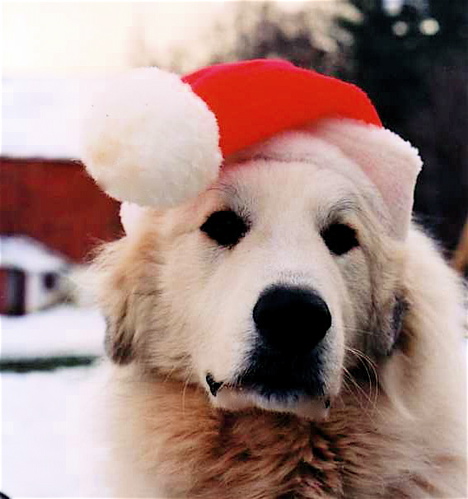