Welcome to an ongoing inquiry about the behavior of people and dogs.
Blog Home >> Animals and the People Who Love Them >> Love. In the Time of Now.

This post is all above love, because if those of us in the U.S. ever needed to focus on it now, it’s this week. I’m channeling love all I can this week. Love of my smart, soccer-focused, flannel-wearing, literal-minded, outdoor-loving, perfect-eyebrowed, kindest-man-ever husband. Love of my funny, irreverent and always-there-when-you-need them friends and family. Love of flowers, in all their impermanent beauty. Love of my fantasy of making Beef Wellington someday. Love of Portmeirion’s Botanic Garden china, especially my teacup with Lathyrus Odoratus (Sweet Pea) painted on it. And of course, of course. My love of dogs.

I’ve written extensively about my love of dogs–our love of dogs–and their love for us. Here’s a passage about Luke from the Afterward in The Other End of the Leash, about love and connection and never knowing what is truly in another’s mind:

He placed the damp, sandy thing in my hand as if it were a precious egg. He’d never done that before and has never done it since. “Keep away” is his favorite game, and although he reliably drops his toys to a quiet word, you can tell that it goes against his nature. Luke hogs the ball every second that he can, and had to learn not to mug Pip if she should get it first. But this time, he eased the object into my hands with a kind of serious nobility and then backed up and sat quietly before me. At first I didn’t even know what it was, just wet handful of brown. Gradually I began to distinguish tiny paws and a tail. My hands held a half-drowned chipmunk, chest pumping with shallow breaths, eyes screwed shut, tiny paws clenched. It had just rained five inches in twelve hours. There was white water in my front yard, a roaring waterfall by the garage. The chipmunk must have gotten caught in the flooding that overtook the farm in the drama of a summer thunderstorm.

Chipmunks are generally bad guests on Wisconsin farms, chewing holes in sacks of grain and nesting in boxes of old photographs in the attic. But this gasping little mammal found her way into my heart, so I cleaned her off and warmed her up. In half an hour she was warm and dry and not at all pleased to be in a box on my kitchen counter. Luke and I watched her skitter across the garage when I let her out.

I will never know why Luke picked her up and handed her to me, ever so gently. He was not being predatory, nor was he being playful. You can’t miss his intense play-stalk when we play ball: his head and tail drop while he crouches in anticipation of the chase. But this time he didn’t look playful or predatory. He was quiet and serious, but soft-eyed, moving as if he was in slow motion. What was he thinking when he eased her into his jaws and presented her to me like a newborn baby at a hospital?  Was he saving her life?

You already know that Luke is one of my best friends. After a hard morning loading sheep onto the truck, Luke and I sit together with a closeness born of hard work, mutual respect, and some undefinable connection that he and I have always had. But I’ll never know what was on his mind when he picked up that soggy chipmunk.  It’s just not the kind of thing that dogs and humans can discuss. 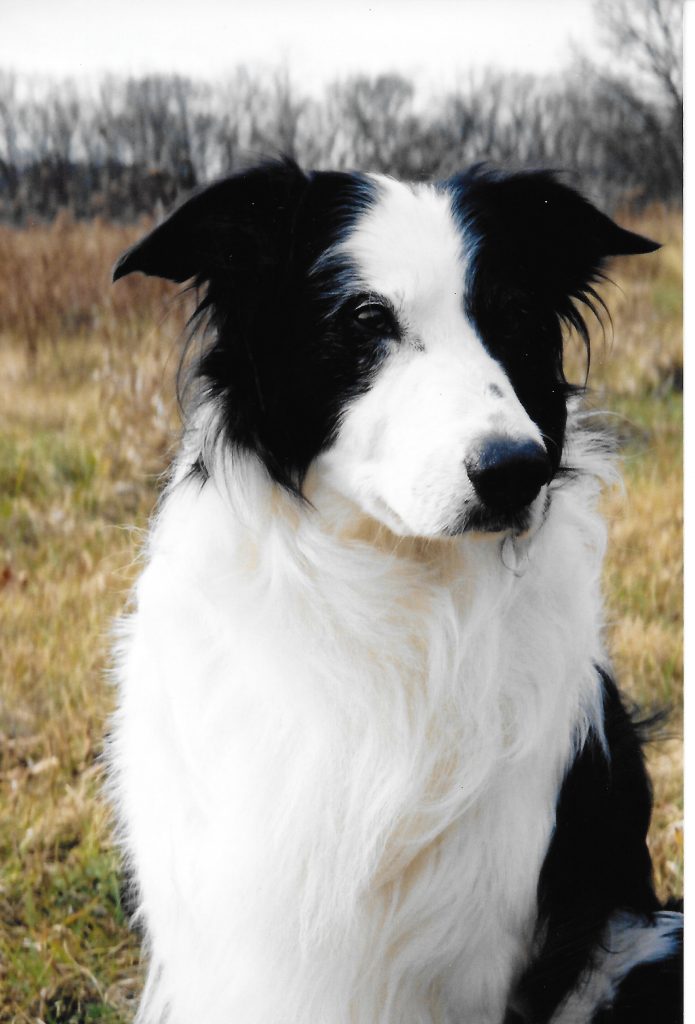 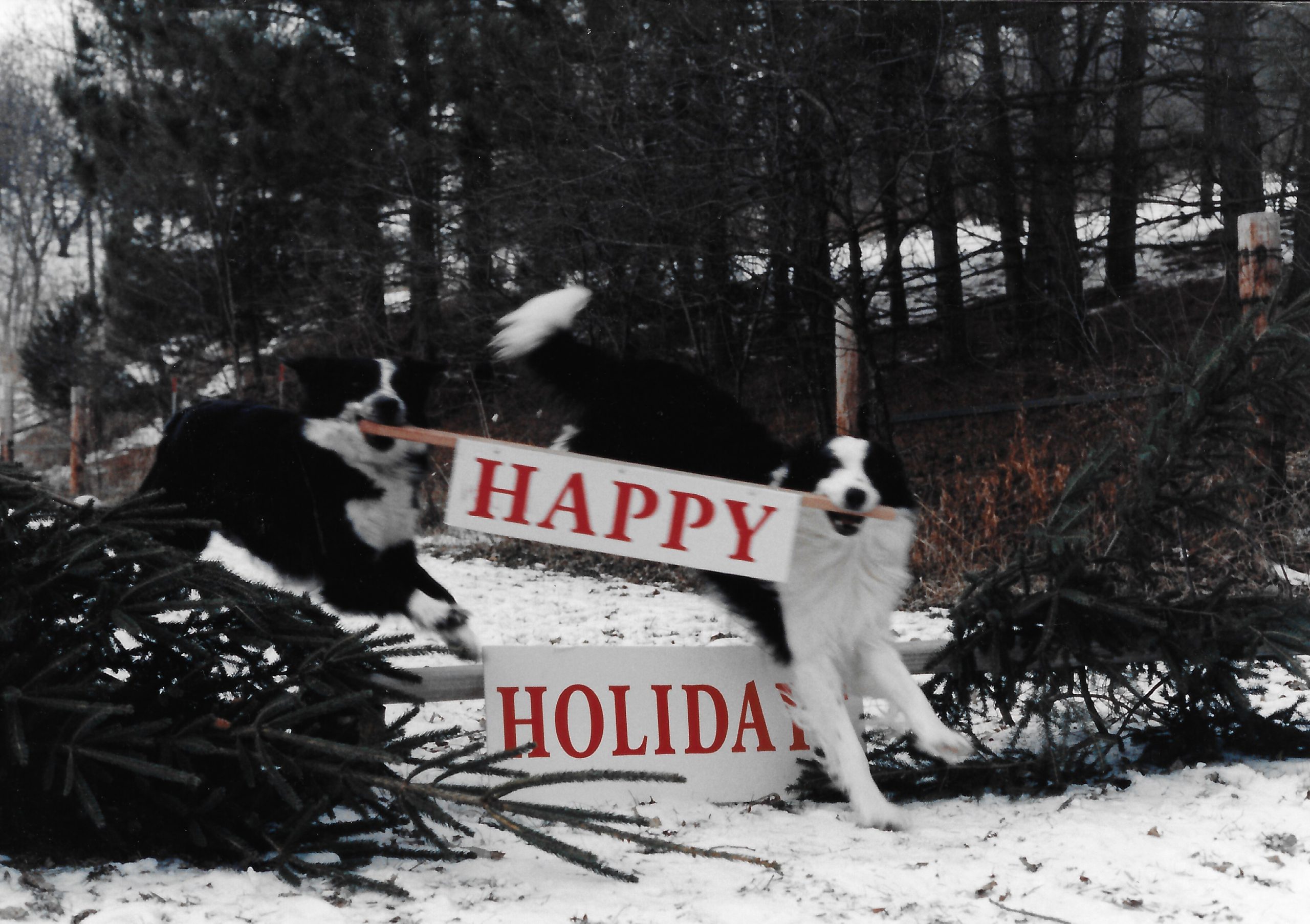 Pip and Luke helped me to create a Christmas card one year.

Here’s a passage, also about Luke, from For the Love of a Dog, the book that compares emotions in people and dogs. It’s from Chapter 8, “Love Story.”

“In 1992, I fell in love with a dog named Luke. I brought him home from a herding dog trial in Minnesota one chilly, October evening, not sure if I’d keep him, not sure I wanted another dog. A gangly adolescent, Luke had been a disappointment to his first owner, who reported he wouldn’t come when called and had failed his first herding lessons. I’d had my eye on him ever since he was a pup, and had told the owner to let me know if she ever decided to sell him. When he came up for sale I had more dogs than I needed, but every time I saw Luke something clicked inside, as if I’d finally found the combination to an old padlock I carried around, unopened. I took one last look at his bright, expectant face, wrote out a check, and drove him home through the red and orange hills of a midwestern autumn.

By sundown of the next day, Luke and I had fallen in love. I don’t know any other way to describe it. I say “fallen in love” with the knowledge that eyes will roll, lips will purse and heads will shake. “That’s pathetic,” someone said to me once when I described my love for Luke. It seems that people either get it or not; like the yes-no simplicity of digital computers, the world sorts into people who’ve been deeply moved by a dog, or people who can take them or leave them. I learned to censor myself, to test the waters before volunteering some platitude like, “Yep, he’s a great dog, Luke,” instead of a deeper, more complex attempt to express how much I loved him.

I am buoyed by the knowledge that I am not alone. People come up to me at seminars, eyes full and bright with the beginnings of tears, and tell me they had a dog like Luke, “forever dogs” we call them, the canine loves of our life, dogs who expand our hearts and fill our souls in a way that nothing else ever had. Old Yeller was a book about a dog like that, a plain yellow dog who settled in the soul of a young country boy, and served as a cultural icon of the depth of devotion we can have for a dog.” 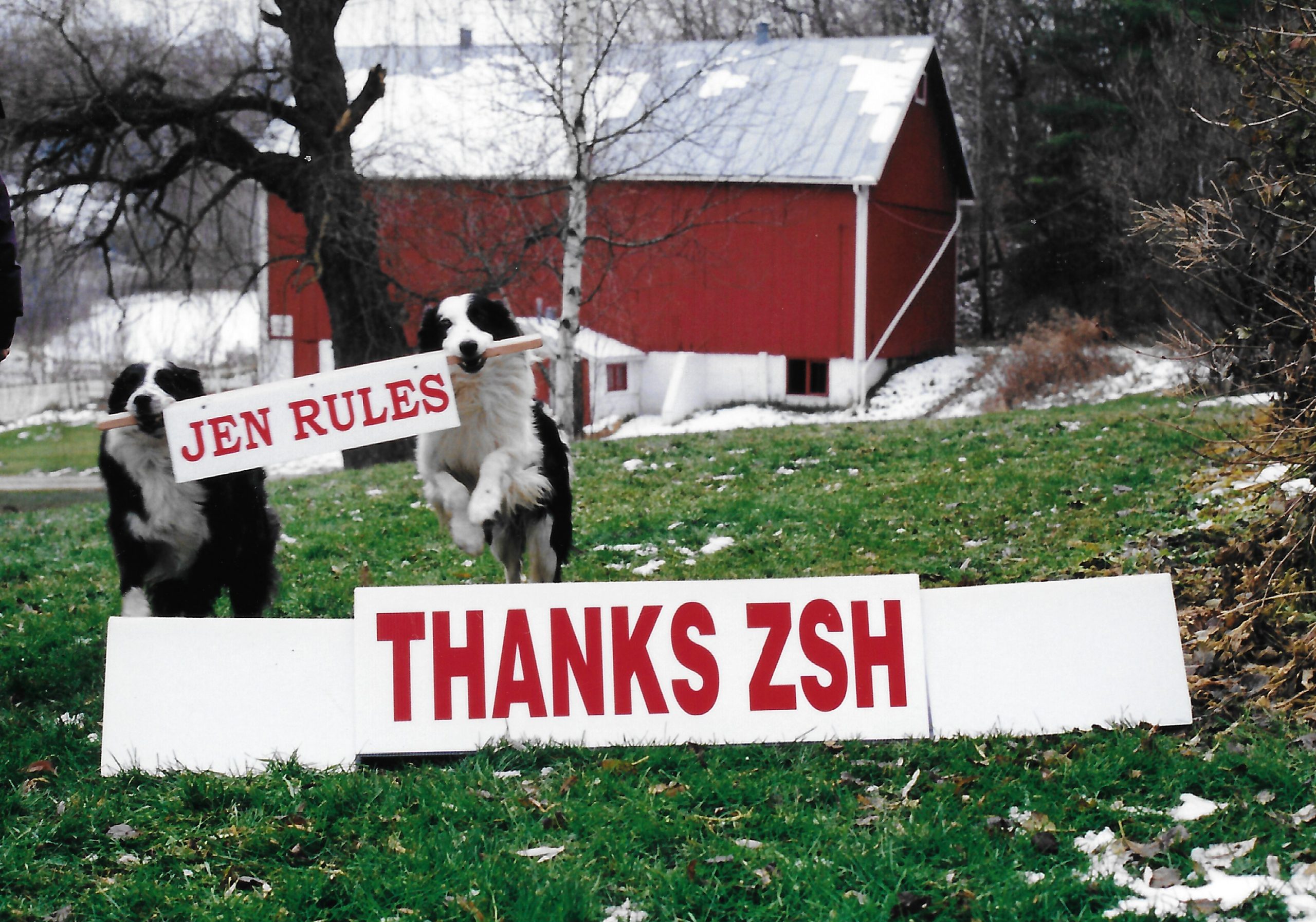 Pip and Luke did a riff on the Holiday Photo to thank my agent, Jen Gates, and literary agency ZSH for all their help with The Other End of the Leash. 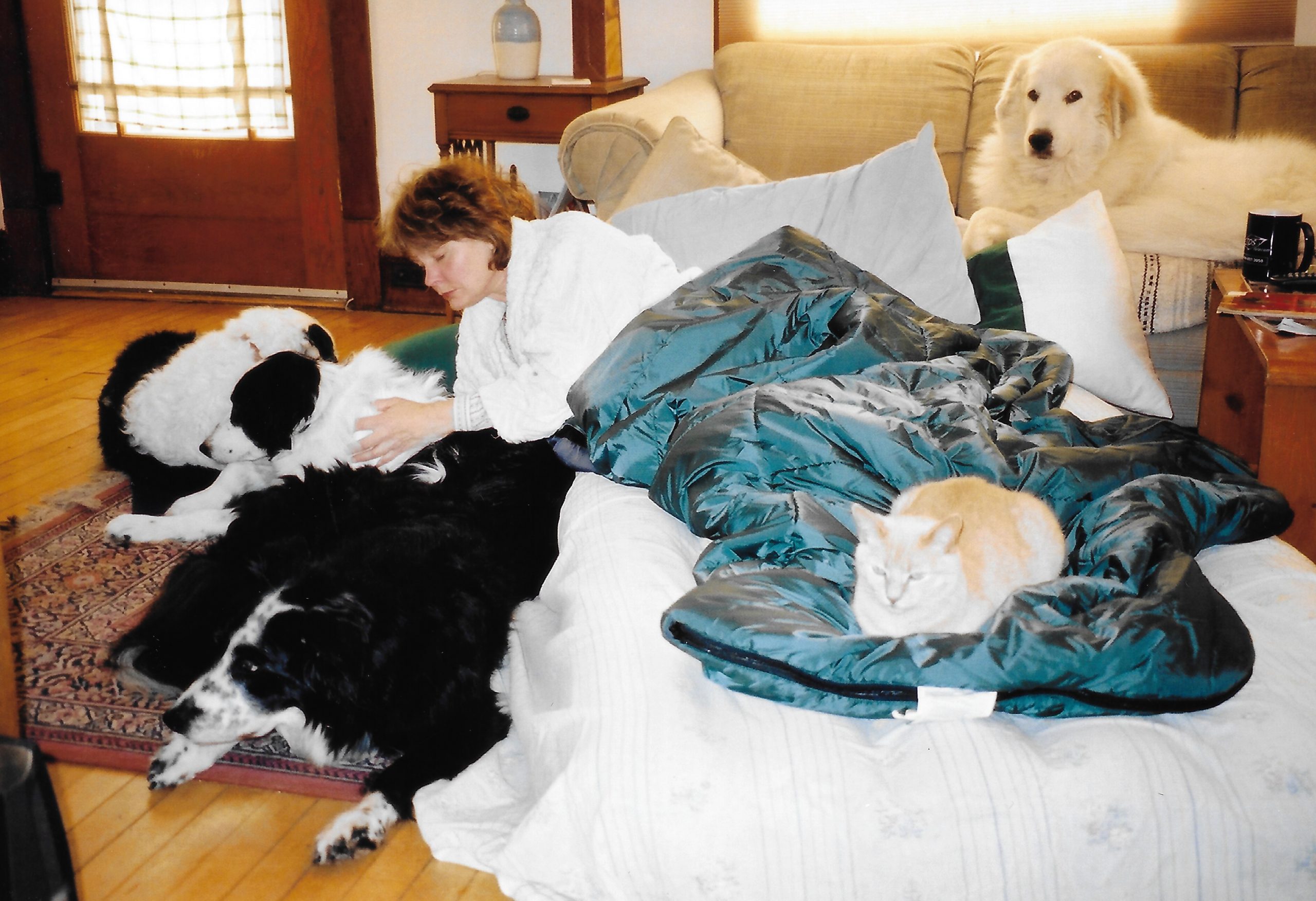 This is a few days before Luke died, when I slept downstairs with him. I cherish this photo because Tulip, Lassie, Pip and Sushi the cat are all in it. We all slept together every night for a few weeks.

And here I am, lucky me, equally gobsmacked in love with Maggie and Skip, as I was with Luke and Lassie and Willie and Tulip and Bo Peep and Pippy Tay. I am astounded at how lucky I have been–to have such good dogs, such special dogs, dogs who deserve entire books written about them. Dogs like Willie. Here’s about Willie, from The Education of Will:

But there was something else—something that I hadn’t allowed myself to talk about. I was just as jumpy as Willie. While his reactivity set me off, I knew that my own startle response did the same to him. We were living in a vicious circle, each making the other worse. In my heart, I knew that in spite of my professional expertise, my own problems meant I wasn’t the ideal owner for Willie.

Heartsick, I leashed Willie, and we went out the door to the car. I put him in a sit/stay behind the car while I hauled the heavy ramp from the backseat and placed it so that he could climb in without jumping and re-injuring his shoulder. It was hard for Willie to sit and stay while I lugged the ramp around. When I turned to Willie to release him, he sat big-eyed and trembling, almost overwhelmed by the energy it took to make himself obey and control his almost-out-of-control impulses. His face was desperate with the need to leap forward—to move move move, oh-please-I-have-to-move—countered by his desire to be a very good dog, the very best dog anyone could ever have. 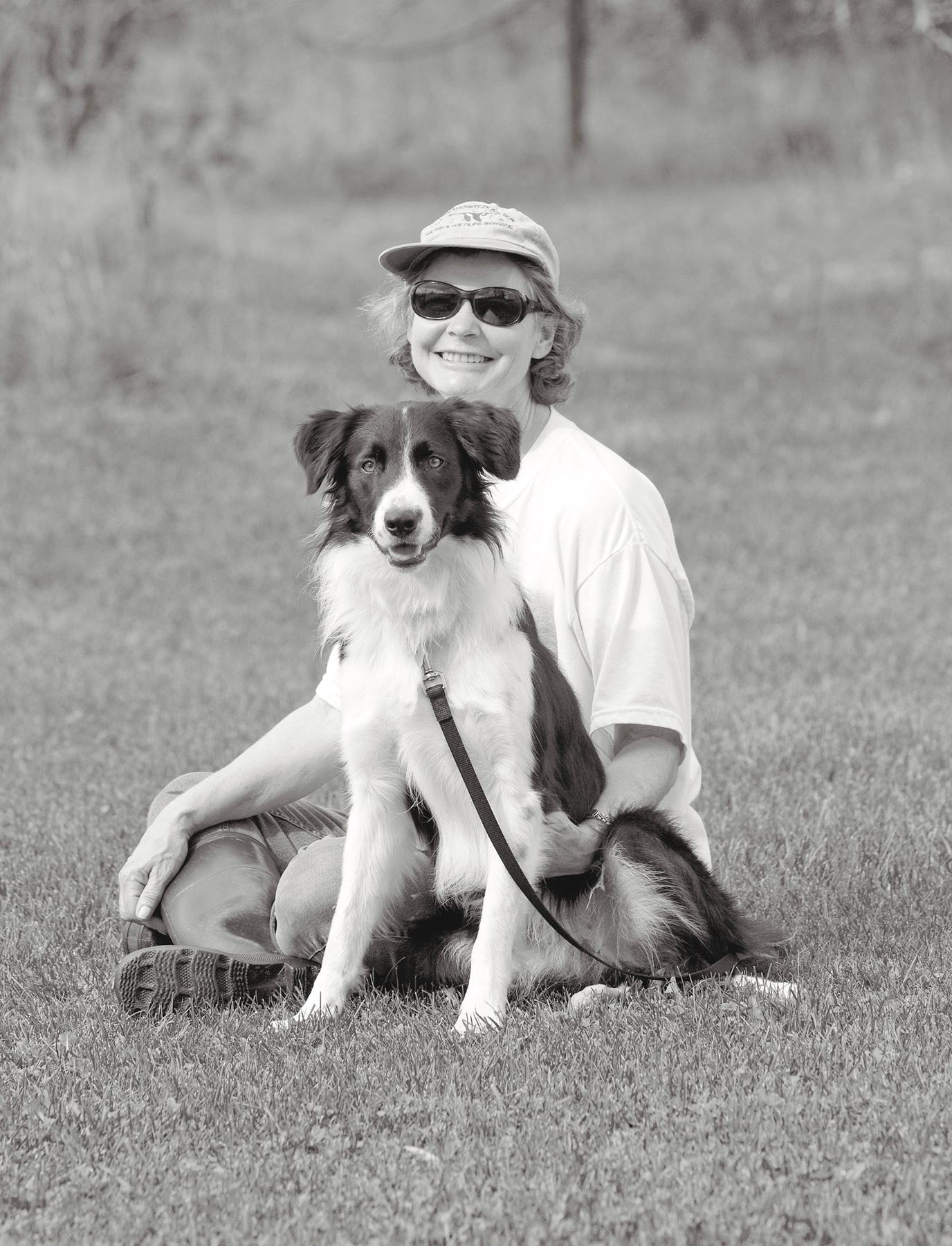 I love this photo, taken by Rich Kane, when Willie and I were both oh so very young. 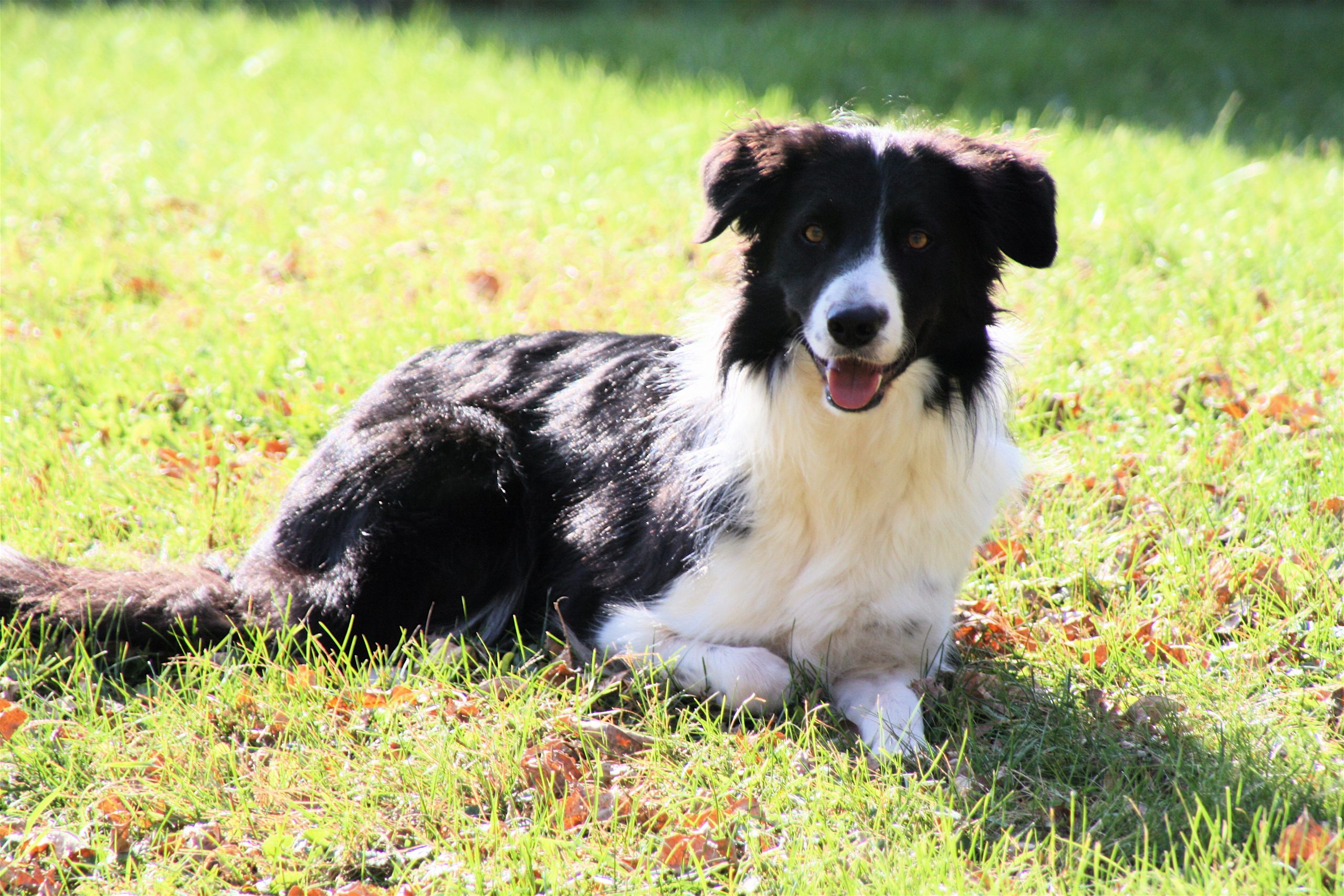 Tell us your love story. I will cherish every one, curled up on the couch with Skip at my feet and Maggie’s head on my lap, sipping Earl Grey tea from my cup, the one with Sweet Peas on it.

MEANWHILE, back on the farm: Dogs and Hats to make us smile. 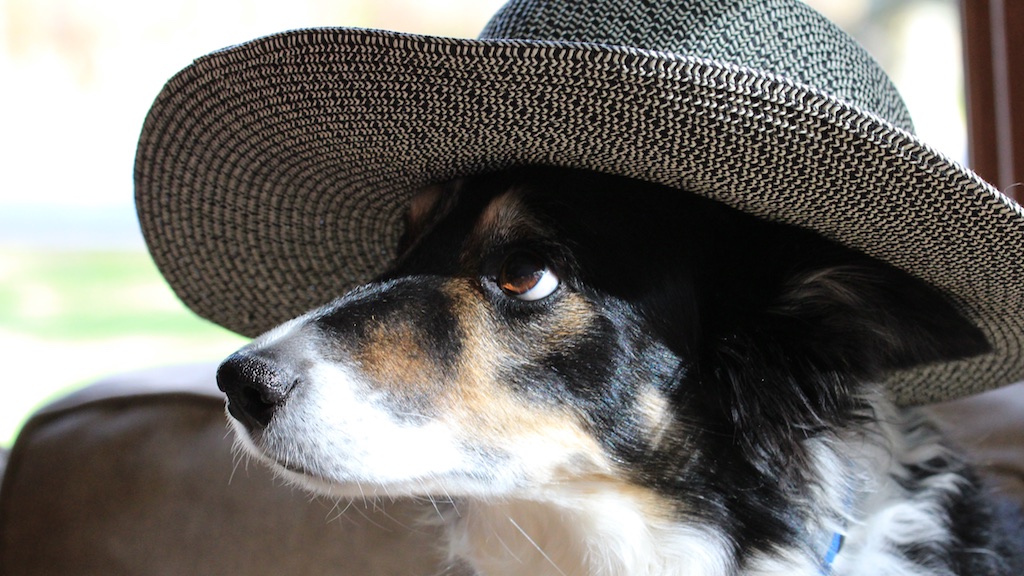 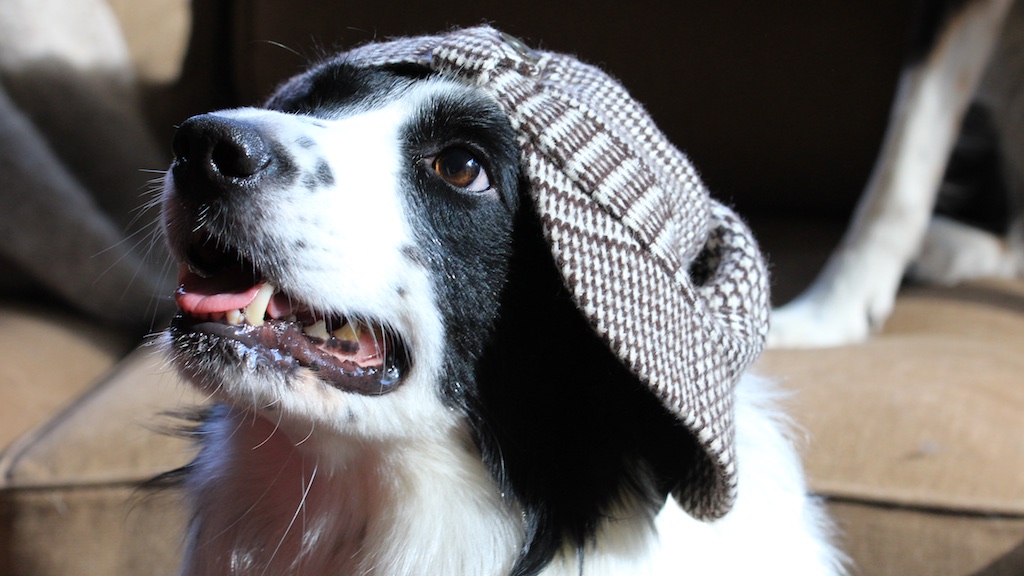 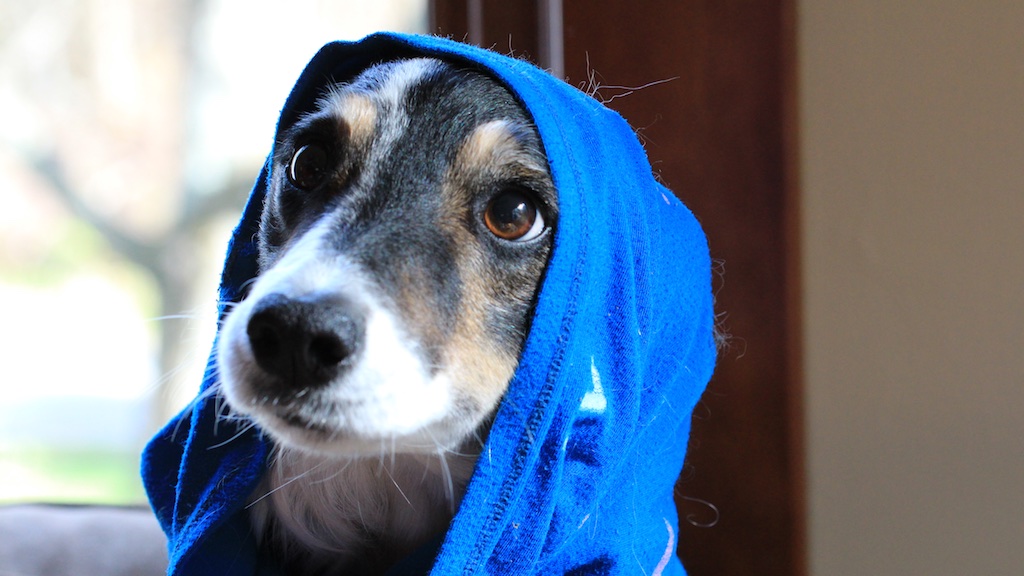 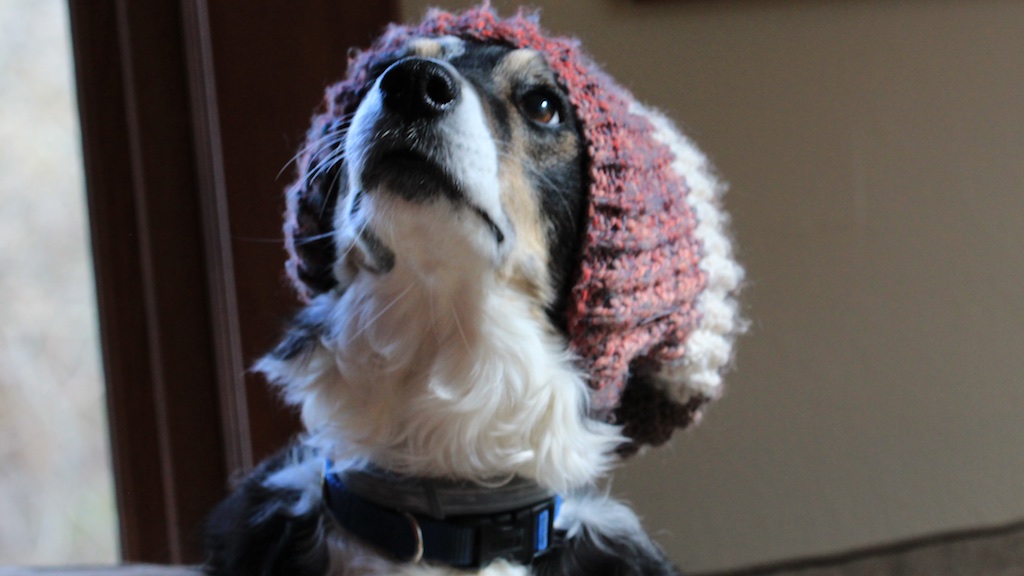 Tell us your love story. Smile at your dog. Buy a new hat. Find something good to focus on and savor it. We’ll get through this.

« Treat Everyone Like a Dog: My New Best Book Ever
Biology of Dogs: Book Review »