Welcome to an ongoing inquiry about the behavior of people and dogs.
Blog Home >> Animals and the People Who Love Them >> Lovely Leonberger Play: A Clinic on Appropriate Play Behavior

Distinguishing appropriate from inappropriate play takes some knowledge and experience, but it’s not difficult once you know what to look for. These videos, sent by photographer, and Leonberger lover, Vic Neumann, are wonderful illustrations of appropriate play between father and son.

I’ve annotated the videos (with the help of Nick Hughes, our new website manager and techie prince, so good to have him on board!) to illustrate some of the aspects of their interaction that are indicative of appropriate play behavior. There is plenty more to see, I’m looking forward to your comments! (Note: You can’t see the annotations on a phone, so if you want to read them, take a look on your laptop.)

This first video is of father Vikahn and son Yulee, about a week after the two dogs met. Watch how Vikahn manages the play session so well, even though there are times he appears to be a bit uncomfortable. (Spoiler alert: We have to put the videos on Youtube first, and so when they are done playing, strange things show up. There’s nothing we know to do about it, so just ignore.)

This next video of the same dogs was taken two years later. My interpretation is that Vikahn is more comfortable playing with his son (more familiar, same size?), but equally appropriate and happy to play. Would that all daddies be so good!

MEANWHILE, back on the farm: Yay! Snow at last. And a perfect amount, about 3-4 inches, which means that the icy-bumpy-awful footing was now covered up, and the ground is walkable without hunching over as if your feet had been bound at birth. Even better, it’s pretty. The warm weekend (40!) melted much of it, but a storm is predicted for tomorrow. Snow/sleet/rain/ice/wind. Hoping for the snow, not so much the sleet, rain or ice. 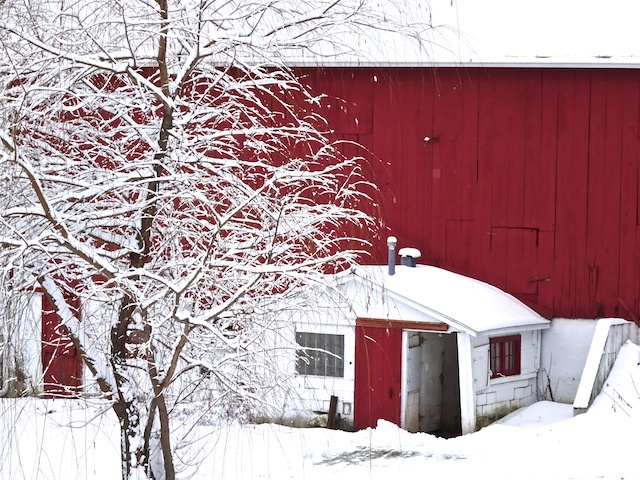 And, bonus… I can work Maggie on sheep again! Finally. She’s done well the last few days, given that we haven’t worked in almost three weeks. The dogs had quite a weekend: New bison knuckle bones, a long, off leash walk in the woods, working sheep with Maggie and an excellent session for her with unfamiliar dogs. I’ve put Where’s the dog?, and Look (at me) on cue, and by the time the second dog appeared she was doing it all herself. Without a word from me, she’d turn to look at the dog, then look at me. In response I’d back up a few steps and give her a treat. I also reinforced her for just looking and appearing calm. We were still a good distance away (20-30 feet), but it was a great session. We’ll work our way closer in as time goes on.  (We were outside a dog training class which is my favorite place to do counter conditioning around other dogs; you can predict exactly when the dogs will show up and where they will go. All the dogs in this area are on leash going into class, so you have everything on your side for a successful session.)

Willie and Maggie also got new toys this weekend. I think the toys were as much for me as for them.  I begin to get bored around this time of year, so it made me happy to give them fun, new things to play with. Maggie settled in right away chewing on the turkey, while Willie immediately began tossing his toy around and asking me to play with him. 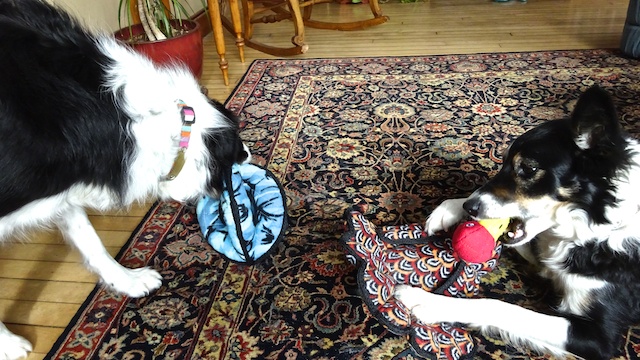 I hope all is going well with you and yours. If you also get what is called “cabin fever” around here at ths time of year, let’s us know how you cope with it.