Welcome to an ongoing inquiry about the behavior of people and dogs.
Blog Home >> Canine Cognition >> Low Pressure and Dog Behavior

For the last two days, Willie has been acting abnormally. He regressed back to sleeping in the bathroom, instead of his dog bed beside my bed. He took his stuffed Kong in the morning to his usual place, but then wouldn’t eat anything out of it. He came into the office this morning and lay down in the dark cavern underneath my desk. All atypical for him, at least in the last couple of years.

There’s something else that has changed these last 2 days, and that is the weather. I don’t know where you are right now, but in the midwest we’ve been pummeled by a tsunami of wind. The wind gusts have been over 60 miles an hour, and the roar of it was so loud it kept me from sleeping on Monday night.

I thought that the wind noise was probably a significant factor in Willie’s change in behavior, because he has become thunder phobic–and wind and thunder are often related– but then I learned this morning that we have been experiencing record low pressure for the last 2 days. Ah! Of course! It is true that Wilie has become thunder phobic this summer (right on schedule by the way, it most commonly develops between the ages of 2 and 4, and he turned 4 this summer). And in a sensory kind of backward chaining, it is common for dogs (and people) to become reactive to stimuli that predict something else. Thunder, for example, is often preceded by the wind coming up, which is often preceded by a drop in air pressure. Once the associations have been made, the dog reacts to a drop in air pressure as he or she does to the thunder itself. (That’s why, for example, dogs with Separation Anxiety often begin to pace and drool when you put on your coat, or take your usual weekday morning shower before going to work.)

There are suggestions in human medicine (and from the field of biometeorology, which is exactly what is sounds like) that changes in air pressure can cause changes in one’s ability to concentrate, in the intensity of symptoms from everything from arthritis to chronic fatigue syndrome and in a general degradation in behavior. Gedeist (1966), for example, found that 4th and 5th graders exhibited more behavioral problems when the air pressure was low, and fewer when it was high. Thus, there’s a potential that rather (or along with) being a predictor of something scary, a drop in air pressure intrinsically affects the behavior of our dogs. I find this question of effects of weather on behavior fascinating–what about when changes in air pressure are less extreme? Can they still cause changes in behavior? If so, shouldn’t we be tracking that in dogs who have problems outside of Thunder Phobia? I’d love to learn more about this from the good readers of this list: Any anecdotes? Research citations? Any biometeorologists out there?

MEANWHILE, back on the farm: It’s all about getting the sheep on the little bit of grass that is remaining (all that’s left is on the front lawn, thank heavens for Willie), working up to hiking 10 to 13 miles a day on the Milford Trek in NZ with a back pack (I took a 3 mile jaunt yesterday in the crazy cold and wind to test out my new gear: everything worked pretty well, though darn near got blown off the road on the way out), finding time to practice with Willie for the little trial we’ve entered and getting the farm and yard ready for winter (not doing so well on that score so far….).

Here’s Willie and some of the flock. (Seems I’ve posted an awful lot of sheep/Willie/grass pictures lately, but that’s a big part of what’s going on at the farm. Besides, who wants a picture of me in full hiking gear? That’ll come soon enough once we get to NZ I expect…). Sorry if you’re bored with these kinds of pictures, I just never get tired of sheep grazing and good dogs watching over them. 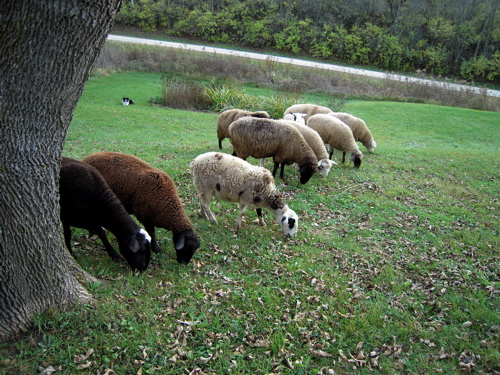 « What Do They Think We Do with all that Poop?
Canine Cogniton and Pointing Gestures – An Update »