Welcome to an ongoing inquiry about the behavior of people and dogs.
Blog Home >> Animals and the People Who Love Them >> Maggie 1, Willie Whoops

We’re just back from a great, small trial in Minnesota at the home of Janis and Dan Reuter. A heartfelt thanks to them for all the work it takes to put on a trial, especially at a farm only five months old. Not to mention the stamina of Robin Reasoner for setting out all day long, and for judge Lori Perry for her supportive and wise presence.

I wasn’t very optimistic about how Maggie would do, because she had a meltdown while working sheep at a friend’s farm just 2 days before. She didn’t respond to my words or whistles, or if she did she went the wrong way. She abdicated whenever the sheep put pressure on her and let them run the show. I ended up putting her back in her crate in the car, because it was clear that more work would just make things worse. Later, after a break, I worked her again, us both working much closer to the sheep, doing all I could to help her, because she seemed over whelmed and lacking all confidence. I don’t know if it has to do with all the storms we’ve had, but she’s been truly squirrely in all kinds of contexts ever since the last storm, so perhaps her reaction to all the thunder might explain it. I have found that those kinds of reactions are often generalized over both time and context. But honestly, I am just guessing.

And then just two days later, she goes and wins second at the trial in MN. Full disclosure: It was a small trial, only twenty plus entries. It was a relatively short course, with an outrun only 200 yards, and a much closer drive than usual. Maggie made one mistake (left instead of right), but otherwise was fantastic. I was slow as molasses in reacting to the sheep, and can’t quite believe the score that I got, but hey. Who am I to argue with the judge? What mattered most to me is that she seemed happy and confident. I should add that they were her kind of sheep–easy movers who were happy to try to leave the field (there were no small number of “Retired” scores–see paragraph on Willie below), but who responded beautifully if the dog knew how to read and respond to the pressure.

Because the course was not huge, and everyone there was so supportive, I gave Willie a run toward the end of the day. He did a perfect outrun and lovely lift, and then, uh… let the sheep run off the course. He followed them for awhile, and then literally stopped and looked at me. “Hey, Mom, I think the sheep are getting away, could you come and help me do something about it?” As I called him off and left the course, I smiled and said “And that’s why Willie doesn’t run in trials anymore.”

Here are a few photos from the trial.  This is Jennifer Thompson’s dog Tally reading the pressure perfectly on the fetch (when the dog brings the sheep directly to the handler). Do you see how the white sheep on the left has her nose turned every so slightly to the left? (Compare it to the noses of the other sheep.) That’s where this particular ewe wants to go, and if Tally didn’t put pressure on her she’d drift over that way, leave the flock and take off on her own. Tally knows this, and is looking directly at the ewe. Such a great example of all the communication that goes on between dogs and sheep. 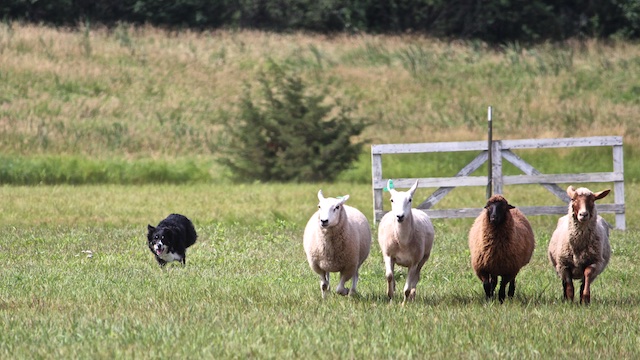 Tally adds a little more pressure here, you can see the commitment, and the nose of the recalcitrant ewe starting to turn. Cool huh? 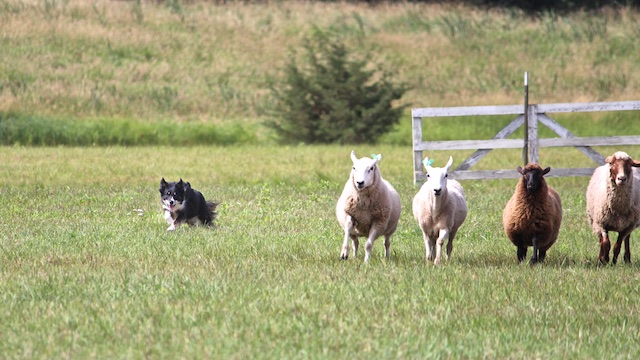 A few more photos: I didn’t take too many, it was pretty hot in the sun and I found myself looking for shade after beginning to feel fried. But here are some fun ones, clockwise from top left: The engaging Zeke, demonstrating the perfect Corgi smile, an adolescent spectator investigating the click of my camera with what I can only describe as “WTF?”, an illustration of what happens when things aren’t going as smoothly as one would like, Rose Anderson (who came in first and third) and her young dog–the perfect example of the happy, relaxed atmosphere of the trial, and Lily, a 10.5 year old Komondor/Great Pyrenees sheep guarding dog cooling it in the shade under the judge’s stand. Lily was sweet as sugar to dogs and people a like, but Janis tells me she won’t tolerate any dog ever harassing a sheep. Gotta love those guard dogs.

Hope your weekend was good too.

« What Was I thinking? (Rescue Regrets are Usually Temporary)
Does Your Dog Come When Called? Every Time? »