Welcome to an ongoing inquiry about the behavior of people and dogs.
Blog Home >> Animals and the People Who Love Them >> Meanwhile…

It’s all “MEANWHILE, back on the farm (and the office) today: For one thing, the weekend is crammed full of preparation for next week’s launch of “The Walnut Grove Tent Camp.” As I’ve mentioned, Jim has worked all summer building a platform for a permanent tent that will be erected next weekend. It situated on the highest point of the farm, under a shady grove of mature walnut trees. If there’s a breeze, that’s where you’ll find it, and we’ve already spent one lovely evening grilling out and enjoying the view. We have guests coming in a few weeks who will be our first tent camp visitors, but we’ll no doubt stay up there ourselves before they come. Basically, we’re creating a way to go camping in our backyard. It’s also up a very long and steep hill, so I assure you there will be nights when I say to Jim, after hiking up the hill two or four or five times already that day, “Nah, you go ahead and go up, I’ll see you back here later.” But, then, I’ll think of this view and probably hike back up the hill yet one more time that day.  Who could resist?

The platform is done and the tent and tent fly has arrived, now we just have to put them all together next weekend! Wish us luck. 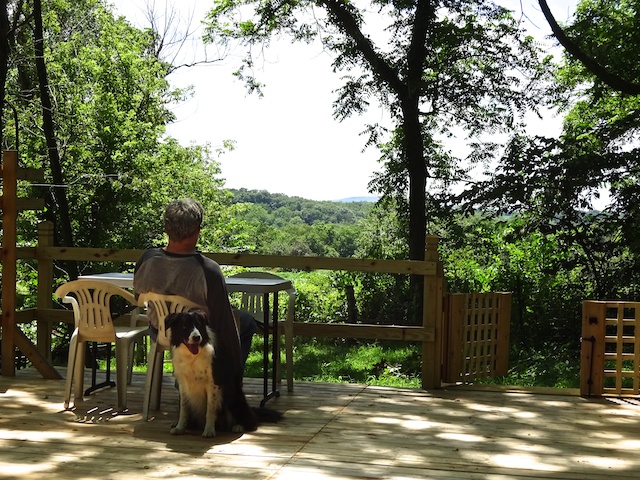 In addition, our office of twenty five years is moving. It’s “just across the street,” but you still have to pack everything up, load it into the truck, unload it and unpack it in the new office. Driving everything from A to B, whether it’s 100 yards or 100 miles doesn’t make much difference. We are down-sizing because we’ve partnered with the good people at Dogwise to do fulfillment for all orders of books and DVDs. They are already doing a great job, and this way I’ll have more time for writing, and maybe some more talks along the way.  The building we’ve been in, The old Black Earth State Bank building, has its challenges for sure (yeah, it’s really old), but it has great character and I have to admit I’ll miss it.

But as I said, they are literally across the street from each other, so the little Midwestern town of Black Earth, WI will still be home, the website, blog and Facebook will all be the same, and cross your paws, I’ll have more time to write and give some more talks when my memoir is done. And goodbye to our old home, a lot of history here! 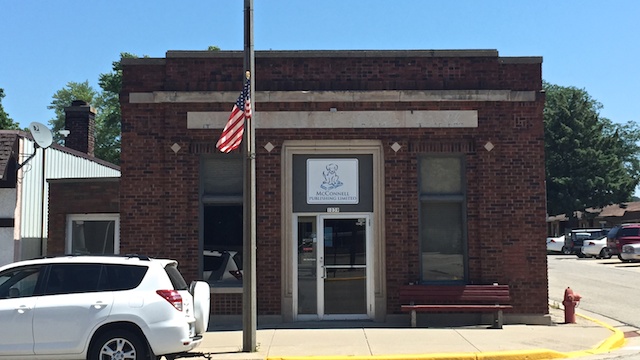 But there’s a lot of packing to do (boy can you accumulate a lot of stuff in twenty five years!), and we’ll be off line later this week while the equipment is being disconnected and transferred, so I thought I send out a light post this week. However, I’ve already got next week’s half written… stay tuned, it’s gonna be fun!

« What is a “Hard Eye” in a Dog? (And What Should You Do When You See One?)
The Puppy Culture DVD & Early Development in Puppies »