Welcome to an ongoing inquiry about the behavior of people and dogs.
Blog Home >> Animals >> MeMe Gets Skunked; Kitten Update

Here’s an interesting case for you: A good friend has a lab cross, MeMe, who was badly skunked a few nights ago. This appeared to be a direct hit to the eyes, the poor dog was rolling desperately on the ground, gagging repeatedly and batting at her eyes. MeMe got medical care and appears to have recovered, but here’s her owner’s question: When Debby found her, she cringed and cowered, “belly nearly scraping the ground, eyes averted and tail down.” Debby said she looked like she was afraid she was about to be hit, although that has never, ever happened. (Okay, it’s not like I live inside the dog’s collar, but I know Debby, and believe me, she’d no more hit a dog than I would.) Debby was not scolding MeMe in anyway, but MeMe still had her head and tail down in the positions that people inaccurately (not Debby) call “guilty,” and she behaved as if she was afraid to get close to Debby, even when she held out cheese. MeMe eventually crawled into bed with Debby that night (still skunky, what a dedicated dog owner!) but cowered her way into the vet clinic the next morning, when normally she’d dash in all excited to see her friends.

Here’s the question: Why did MeMe behave that way? Was she really afraid of Debby? What did her postures and signals mean? I’d love to hear your speculations. I’ll chime in after a few days with my own ideas. Debby sent me a photo of MeMe the next day, eyes still a bit red, but healing. 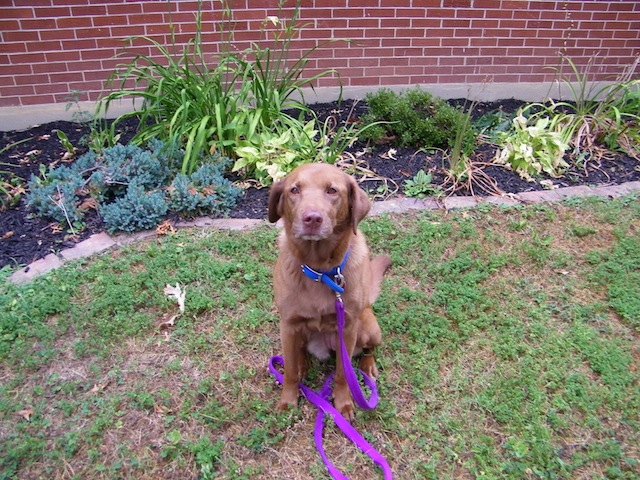 MEANWHILE, back on the farm: The drought continues, during the day the sheep lie on their sides like dogs, but the evenings now cool down a bit and Willie and I have been able to work the sheep for brief periods of time the last two nights. However, I’m neglecting the dogs a bit because The Kitten Chronicles continue. Here’s an update:

After trapping 4 kittens last week, we successfully live trapped first mom and then her last kitten on Saturday night (with two traps, side by side, cats trained to enter by placing food farther and farther back inside the traps). I was thrilled to find mom in the trap at about 9:30 pm Saturday night (I was feeding her every night at 9) and then the last kitty in the other trap in the morning. Yeah! Just call us Trapper Trisha and Jungle Jim.

Mom, who is now named Xena, was taken first thing Sunday morning to Friends of Ferals for their monthly “Spayathon” and spayed that morning. New Kitty was put in with the gingers, where she hid behind the toilet and hissed at me whenever I entered. Xena returned from spaying on Sunday afternoon, and on an expert’s advice, I let her out of the small trap into a larger dog crate in the barn to heal up for a few days.

Alert: Do not repeat that yourself. Xena darted out of the small trap, hit the back of the dog crate and went crazy. Here she was, having been spayed just a few hours ago, throwing herself against the walls, flipping 360’s off the ceiling while I stood helpless and watching in horror. That’s three times in the last week I’ve seen cats discover themselves in small cages and flip out. Both sets of kittens and Xena, when finding themselves trapped, panicked and threw themselves at the walls repeatedly. Lesson learned. In hindsight I wish I’d kept her in the small cage for longer. [Addendum added a few hours after posting: In case this is relevant someday for you: I should add that it is important to have the cages completely covered. Several people suggested that if the cages had been covered, Xena would have remained calm. Alas, she hadn’t read that chapter, the cage was completely covered top and sides, and she still panicked. Not for long, but 15 seconds of extreme panic and activity probably isn’t a good thing few hours after surgery.]

Worried, I checked on her often, even though I couldn’t handle her. I thought about capturing her with a rabies pole and taking her to my vet, but decided that would just stress her more. I used a flashlight to look for blood on the towel she lay on, nothing there. She ate the food I left her three times a day–more good signs. I finally opened the crate door Tuesday morning and left the barn. When I returned an hour later she was still lying in the back of the crate as if she hadn’t moved. Uh oh. That had me worried. Back an hour later… still there. Oh dear, not good at all. I decided to give her one more hour, and put food on both sides of the doorway. When I returned a half hour later, she was gone.

But would she ever come back? Was she recovering or not from her surgery? A bit later I heard a plaintive cry from the woods above the barn. Oh damn, I first thought, she’s injured and desperate and I’ll never find her again and what will happen to her now and… But then I remembered that injured or ill cats don’t vocalize, they go silent as stone, as my own injured cat Ayla did so many years ago. Perhaps then, I thought, she was calling for her kittens. That was my hope, but I could only guess and worry.

But that night, Xena did come back and ate the food I left her, and she continues to do so. I saw her several times on Tuesday and Wednesday, always cautious, but clearly not as frightened by me as before. And the news gets better…

Kitten Calico and Momma Xena are now re-united. So far anyway, everything is going as well as I could hope. First, Calico is 100% socialized to people. She seeks out people, rubs against us, loves chin and belly rubs, and plays like a champ. She is physically fearless and already Olympic in her athletic ability. She tamed down much faster than the others, primarily because she was alone and I spent more time with her, but I think she is also a bit of a fearless little sprite.

Once she began to come when I called her, and was clearly enamored of people,  I began carrying her to the barn and feeding her there, letting her play in the hay for a few minutes, and then bringing her back into the house. The first time out she played around the barn like a wild woman while I held my breath I’d be able to get her back. Yesterday afternoon I sat in the haymow and while she played I read A Lawyer’s Journey, a fascinating book by Morris Dees, founder of the Southern Poverty Law Center. I heard a plaintive meow from outside of the barn, and sure enough, it was mom. I stayed quiet and still, and in a few minutes Xena walked in, saw me and trotted out. I stayed a few minutes more, left some chicken for mom, picked up Calico and the two of us went back to the house. After a few hours we went out again, and this time Xena walked into the barn and greeted Calico while I sat, breathless, heart pounding, totally enraptured by mom and kitten re-acquainting. There was no doubt they remembered each other. After several minutes of rubbing, sniffing and vocalizing, Xena moved further into the barn and realized for the first time that I was there. She left again, but this time withdrew only a few feet, sat in the grass and growled at me. Never have I been so happy to hear a cat growl. I was about to pick up Calico and take her back for the night, but my gut said no, better to leave her here with momma so they can complete bonding.

So that’s what I did, walked back to the house taking deep breaths while the night sky turned navy blue and the farm light glowed over the driveway. Not so easy to leave this little bundle of fur to herself and her mom, but I felt it was the right thing to do if Calico and mom were to live together in the barn. This morning I looked out first thing toward the barn, and there Xena sat in the driveway. She didn’t run off when I took the dogs out to pee (another first), and little Calico popped out of her hidey hole like a piece of toast when I called for her when I went to visit. I’ve seen her twice since, bringing food and head rubs and toys to play with. My ultimate hope is that Calico will help Xena learn that not everyone wants to hurt her, and that she can count on me to feed and protect her.

Here’s Calico yesterday sniffing the trap that caught her mother. She was fascinated by it, went back to it over and over again. Not long after that, Xena began to meow from the woods. 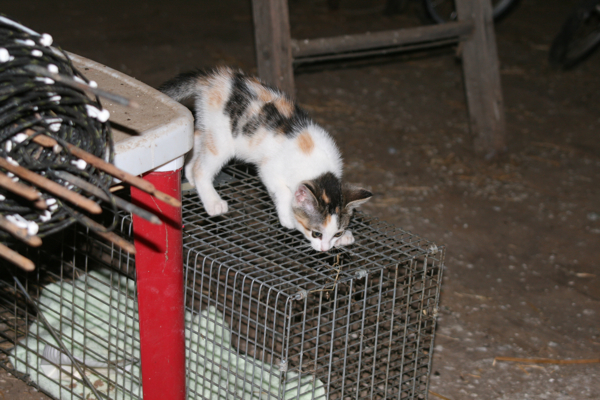 And the others? Little “orange and white,” now Amelia, is described as the friendliest, most social cat Scott has ever had. She is flourishing and about as happy as a kitten can be. So are Brave and the other 2. All the kittens (the 4 I still had anyway) went to the vet on Monday for vaccinations and worming, where I discovered that little boy “Not Brave” is actually a little girl.  Whoops. But they all progressed well over the weekend, Brave taking food right off your finger, happily playing with toys with you, while the newbie slowly adapted to taking food from a long spoon. Dan Johnson of Friends of Ferals came to take them on Tuesday, where they will be up for adoption sometime soon. If I thought my farm could handle 3 cats without compromising the wildlife, I would have kept one more in a minute. They are gorgeous and lovely kittens, and I will do my best to follow their adventures in life. I hear that two of them might have found a home already. Here they are lounging on the porch (thanks Dan for the photo!). And I have to go out of my way again to thank Dan, Kelly, Dr. Adam, Dr. Susan and all the wonderful people who volunteer for Friends of Ferals. The world is a better place for your efforts. 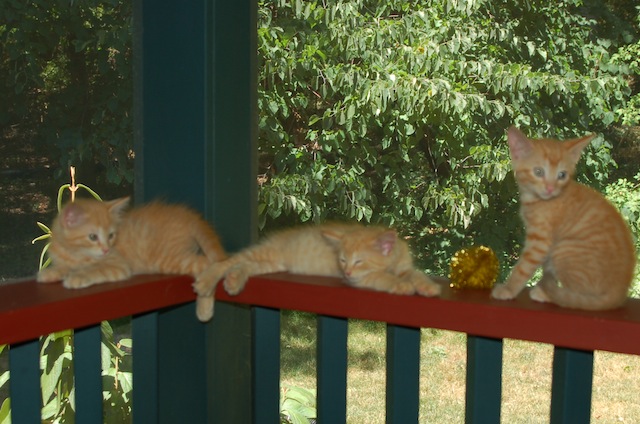 It’s been quite a ride, this adventure that began with Sushi leaving and Xena coming. As a zoologist I know that Xena most likely came into the barn because of the vacuum left by Sushi’s absence. That’s no doubt true, but I still want to believe that maybe, just a little bit, the universe knew how much my  heart ached for a cat, and decided to do something about it.