Welcome to an ongoing inquiry about the behavior of people and dogs.
Blog Home >> Animals and the People Who Love Them >> Memorial Day and Dogs in War

It is Memorial Day in the United States; a day for remembering those who have lost their lives in war. It is only fitting that National Geographic just came out with an article on “The Dogs of War.” I read with it the same mixed feelings I always have on the topic of young, healthy lives lost because of our inability to solve conflicts without violence–admiration and respect for those in the military, and deep sadness for all the loss that war creates.

It seems only right then to take a moment to thank all of the dogs that have been enlisted into our battles; for their commitment to a job, to their moments of bravery, and to the comfort that they give to the men and women caught in conflicts, far away from home. I admit to feeling a great sense of sadness that they are there at all, but tremendous gratitude that they give so much to the troops who need them.

I am one of the very lucky Americans whose lives has not been directly affected by war, but I do not forget for one day how many people, and animals, are being affected by conflicts all around the world. In the past my family was profoundly affected by war. I remember my mother telling us about her life in Hong Kong before WWII, when she dated British Naval Officers who were assigned to a submarine base. One of them, Monty I think it was, asked her to marry him. She declined. Not long after, Monty, and all the rest of the crew who had become good friends of my mother and her cousin, died when their submarine was sunk by torpedoes. Her cousin was captured and spent years in a camp in Japan. My uncle was the only survivor in his squadron of the RAF, and his father’s health was destroyed in WWI with mustard gas.

And so today is always a bitter sweet day for me. It is the height of spring–of new, fresh fern fronds and Veeries warbling their descending trill in the evening and baby rabbits poking their heads through the violets. So much vibrancy. So much life. And such a good reminder to all of us to thank those who have gone before, and cherish what we have now. I find myself thinking of my first dog Fudge, and my first Border Collie Drift, and feeling overwhelmed with gratitude for all they have taught me. Not to mention how grateful I am to have the best husband imaginable, along with three wonderful dogs and two perfect cats. I’ll be thinking about them, and all the things I’m grateful for, even more than usual today.

One of the things I’m grateful for is you… I never dreamed that this blog could result in such rich conversations. You’re the ones who make it so, so thank you. Thank you.

I thought you might enjoy a snap of Willie and Maggie playing tug this morning. I’ve gone back to letting them play without time outs… will explain later! 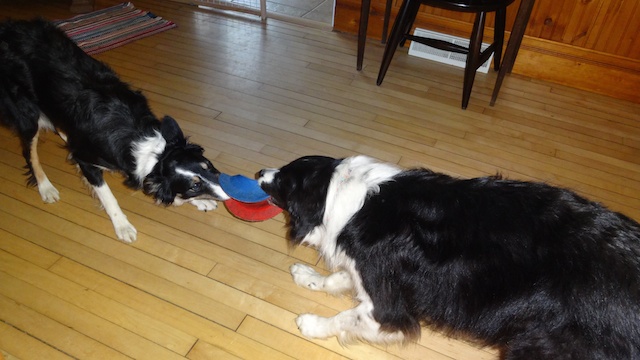 Here are some of those gorgeous ferns I mentioned earlier. We had a new retaining wall built last year behind the farm house, the first attempt at really landscaping behind the house that we’ve done. There is tons and tons of work to do, but the ferns are thriving and the wild ginger (bottom right)  is starting to spread. 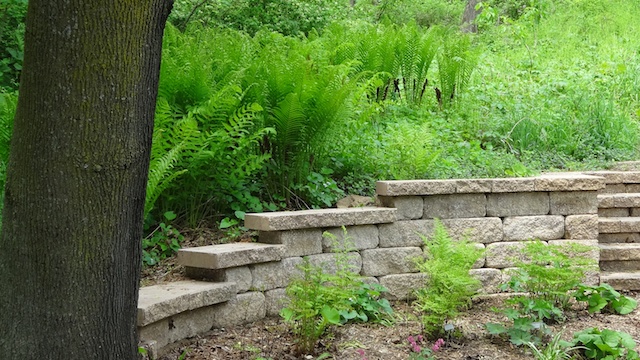 « How to Talk to Other Dog Owners
Resource Guarding Revisited »