Welcome to an ongoing inquiry about the behavior of people and dogs.
Blog Home >> Animals >> Missing the Sense, Scent of the Missing

Part of the fun of preparing for the seminar I did in Orlando was working on the canine olfaction section. The overall topic of the day was Canine Communication (often compared to primates like us), and most discussions in this vein emphasize visual communication. That’s all well and good, I’m a visual signal groupie from way back, but I loved beginning the day talking about scent, and imagining what it would be like to be able to use one’s nose like a dog. We all know, intellectually anyway, how important smell is to dogs, but because we tend to be so oblivious to it, it is hard for us to imagine (Example of our obliviousness: What’s the common word used to described people who can’t smell?  Yup, there isn’t one.)

Hard to imagine what it’s like to be a dog (okay, impossible), but here are helpful hints, many of which I learned from Susannah Charleson, author of Scent of the Missing: Dogs can sort out individual scents just as you can visually distinguish different pieces that make up a stew. There are the carrots, the onions, the beef…. And if you are trained, you can taste the gravy and notice the hint of rosemary and thyme. Just as we can sort out visual stimuli, dogs can separate out all the components that make up one particular smell. What we don’t know (we know shockingly little about the world of scent to a dog) is what scents they perceive and notice in the environment, especially as it relates to other dogs. Does a good whiff in the grass relate to “Hmmm, a little female poodle, a large neutered boxer…”, or something more along the lines of “Female, slightly nervous, ate fish last night, having kidney trouble apparently…”

When working with tracking or trailing dogs, you also learn that scents are like objects in that they have a shape and a physical presence–imagine them as an oddly shaped balloon, whose shape depends on the soil moisture, wind currents etc. When dogs are searching for a scent (or just blunder into one), you can tell when they first discover the “edge of the envelope.” Of course, all dogs are different, but most dogs pause for a microsecond, and their posture changes: their tail might go up, or perhaps their head. It is usually quite clear when a dog first discovers the ‘edge’ of a scent. I saw Susannah illustrate this in human terms last November in Austin, and she graciously has allowed me to pass it on. I love doing so, because it is yet another way of trying to bridge the gap between canine and primate, my favorite game in life.

Here’s the demo: Have one member of the group volunteer to leave the room. Turn on a long playing piece of music (yup, music, bear with me) on a small device like an iPod or iPad. Turn it down so low that it can barely be heard, but is still clearly discernible if you are close enough, and hide the music somewhere in the room. When the volunteer returns, ask them to locate the music. People search for sound just the same as dogs search for scent, moving around until they …Ah! …think they might have heard something, and then gradually work their way closer and closer until it gets louder and louder, just as scent gets stronger and stronger. Of course, the music won’t be as affected by wind currents (I love how you can follow wind currents by watching a dog search for an object), but it is fascinating to watch a person try to localize sound, and clearly indicate, just as dogs do when they first discover a scent, that they have found it’s ‘edge.’

We did this demonstration in Orlando at the Communication Seminar (DVD coming in a few months if you missed it!) and it was truly great fun. You can do this with any group of people, it could even be fun in a basic dog training class if there was time. By the way, I learned so much about scent work, and loved Susannah’s writing so much, that we are selling her book, Scent of the Missing, on the website.  You might want to check it out. And stay tuned, I mentioned earlier that a TV show is in the works right now, based on Puzzle and Susannah and a cast of other S & R team members. (And yes, there’s a really hunky guy in it. Of course!)

What about you? Do you have any ‘scent games’ you play with dog owners to help them understand the umwelt of a dog? I’d love to hear about them. This sense of dogs is so important, and yet we so easily ignore it. I see it relevant in so many aggression cases (Ex: Willie once attacked a dog for ‘no reason’.. until I remembered that the dog’s house mate had attacked Willie once, so the scent of trouble was there all along.) I’d love to hear your perspective.

MEANWHILE, back on the farm. Willie is just back from PT, and Courtney is thrilled with his progress. We did have a set back early this week–running in semi-deep snow made him lame that night, but he recovered 95% in 2 days and that’s good. I am still working on accepting that this is just what it is, that just like my body, sometimes Willie’s is going to bother him. We’ll just make a note of it and avoid that activity if we can, and if not, then just let him rest up whenever he needs it. He’s just simply never going to be sound, but then, neither am I (neck, back, knee, spine, I could go on…..) but who cares! We just learn what works and what doesn’t and manage around it.

We have the go ahead to VERY VERY cautiously begin working sheep again.  Be still my heart. Of course, only a minute amount at first. A short little drive here. Then rest. Then maybe a very short, simple outrun and fetch on very quiet sheep there. There won’t be much sheep work now though, because it’s icy in some spots (the absolute worst for Willie; he even has to heel beside me all the way to the barn now, the driveway is a skating rink) and I don’t want to work in him snow deeper than two inches or so. He’ll wear his hobbles and I’ll set it up as carefully as I can, hold onto to my heart and go from there. I’ll keep you posted.

Here’s a photo that is, uh, a little out of the ordinary for this blog. It’s me mum as a little girl,  (yes, she was English), illustrating her love for animals at an early age. Mom has been gone a long time, but she adored animals, dogs especially, and somehow it just seemed right that she had a place here. I loved animals too even when I was tiny. I had 52 stuffed animals at one count, and refused dolls (because they weren’t soft and cuddly.) Anyone else crazed for stuffed animals when they were little? 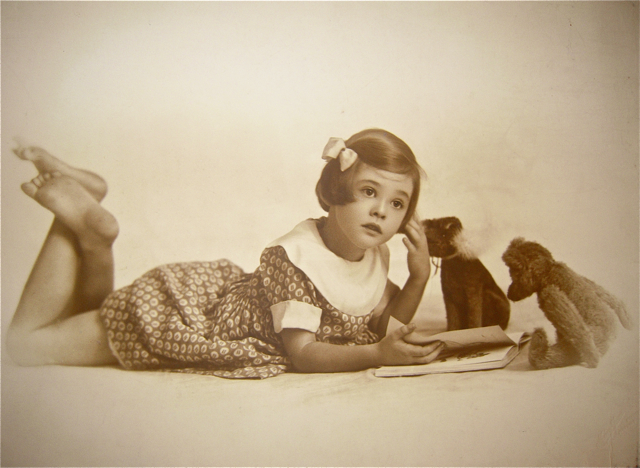 « Therapy Dogs – Born or Made?
Is Silence Golden? »