Welcome to an ongoing inquiry about the behavior of people and dogs.
Blog Home >> Animals and the People Who Love Them >> Monkeys, Macaws and the Marvelous Rain Forest

Ahhhhhhhhh. We are just back from a ridiculously luxurious vacation on the Osa Peninsula in Costa Rica. National Geographic calls it “the most biologically intense place on earth”, and it just takes a few hours there to understand why. It covers less than a thousandth of a percent of the earth’s surface area, but houses 2.5% of the biodiversity of the entire world.

Lest “2.5 %” doesn’t sound like a lot, keep in mind that it includes 463 species of birds, 140 mammals, over 4,000 vascular plants and 10,000 species of insects. Surprisingly, even though we were in the rain forest, there were literally no bothersome insects. Not a mosquito all week, and some killer-cool, huge beetles that surely anyone would love.

Jim and I took a gazillion photos, and lucky for you, I can’t begin to share them all. (Anyone remember endless slide shows in the 60’s and 70’s of your friend’s not-very-good vacation pictures?).

Since less is more, here are just a few highlights from our trip. I’ll share a few more as the weeks go on, cuz, well, there are just so many “dogs and sheep in the snow pictures” a person can take.

We took this photo of a Geoffrey’s Spider Monkey and her young right off the deck of our bungalow. It’s the dry season in the Osa, and according to local guides, it is a better time for monkeys to give birth. Although Spiders can breed any time of the year, the rainy season can include drenching, endless rain, which is hard on infants and mothers alike. 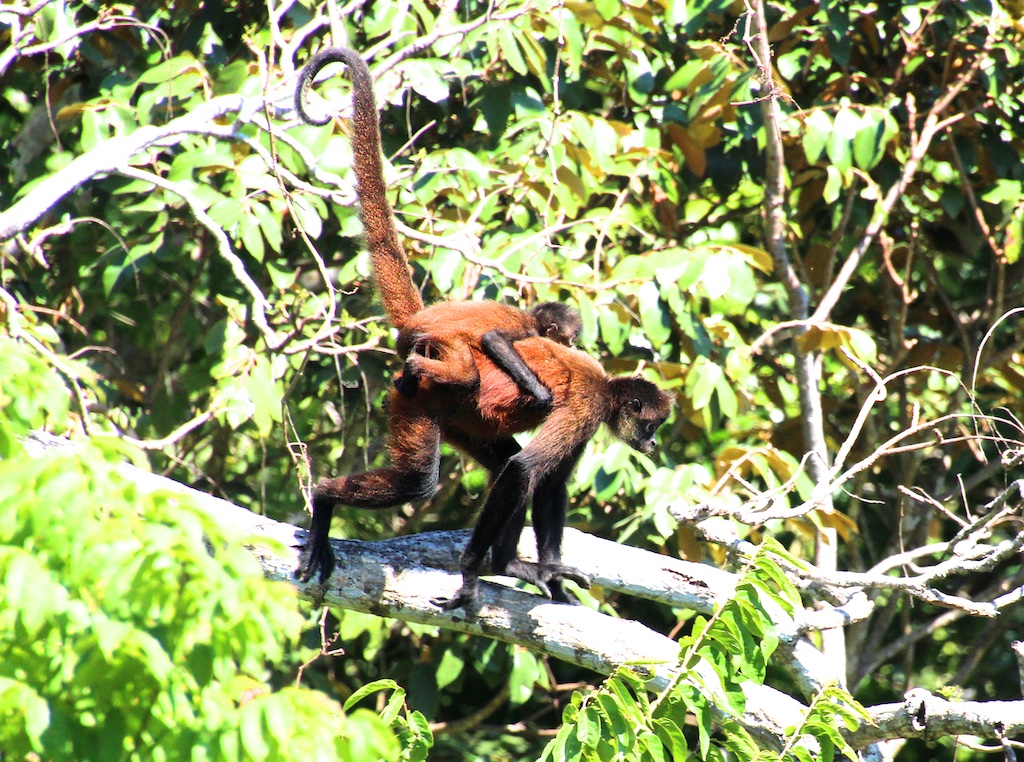 We saw Spider Monkeys more than any other monkey species, in part because they are so active. Sadly, of course (you know what’s coming…), they are listed by the IUCN as endangered, primarily because of habitat loss, but also because of hunting pressure. But the Osa Penninsula is one of the few places that they are thriving. Fun behavior fact: Unlike most primates, females disperse from their natal groups, and have to find a new group to join once mature. Note that her magnificent tail is also an grasping appendage, just like her arms and legs. Too cool to watch them move through the trees with all 5 stretched out and holding on to something. 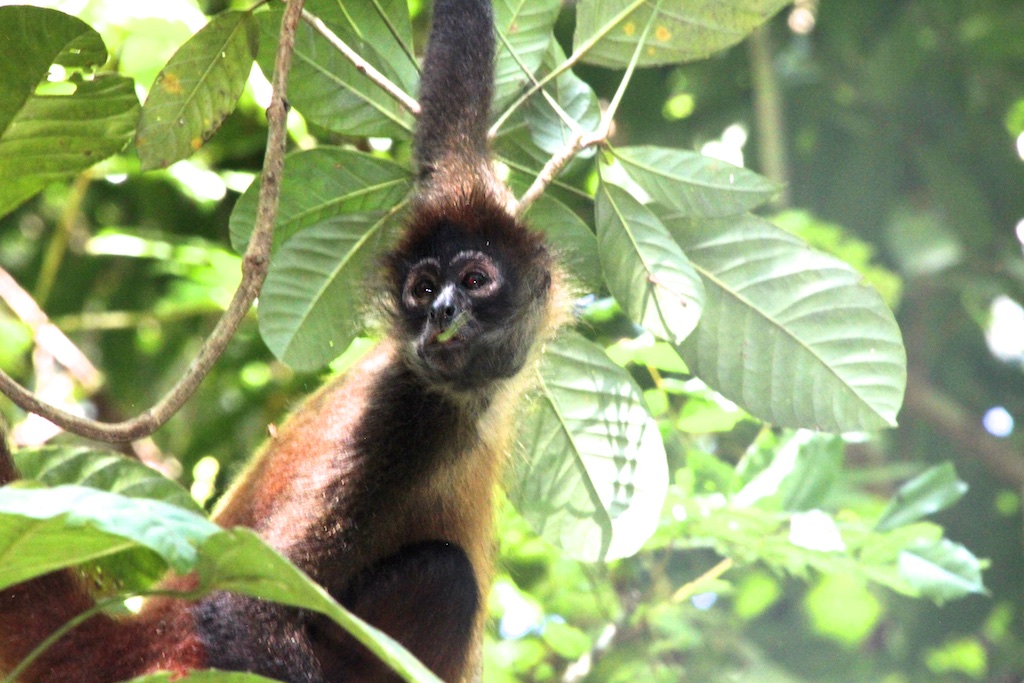 We didn’t see as many Mantled Howler Monkeys, but we sure as hell heard them. You can listen here to an example from National Geographic. I wouldn’t call them “howlers” myself, their calls sound more like “Bark-Roar-Wailing” to me. But I guess it would be a bit awkward to call them BarkRoarWailer Monkeys.

I do have some photos that include the entire monkey, but I love the photo below because it shows their grasping hind feet so well and has a sense of action in it. Most of the howlers we saw were draped over a limb, napping in the sun. Because they eat leaves exclusively, they are basically the cows of the primate world. Leaves have little nutrition, so the monkeys have to conserve their energy when they can. Which is pretty much anytime between 7 in the morning and 5 in the evening. Before and after that, the forest literally vibrates with their calls. It felt like we were living in Jurassic Park. 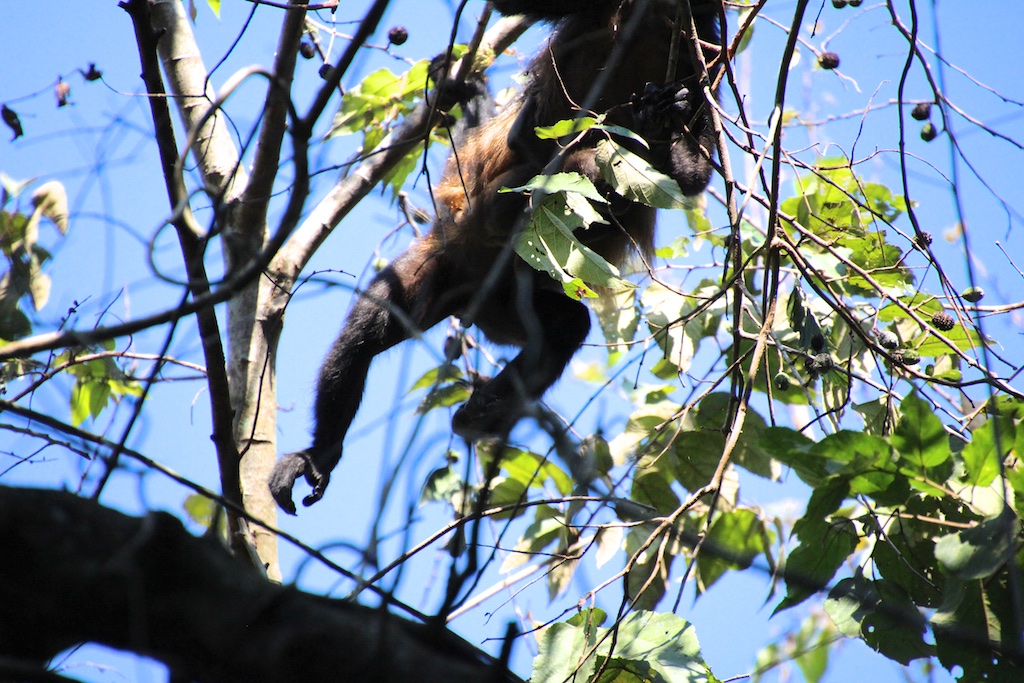 We got to see Central American Squirrel Monkeys twice, both times up close and personal. We’re talking about the King Charles Cavalier of monkeys, the ultimate oxytocin pump primate who looks like it came out of a Disney movie. They were always active and agile, leaping from branch to branch like squirrels. (They are also about the size of a grey squirrel, so their name is pretty much right on).

The good news here is that the IUCN has upgraded their conservation status from Threatened to Vulnerable. There are a number of conservation efforts underway, and it is heartening to see all the people working hard to preserve all the amazing primates in South and Central America. 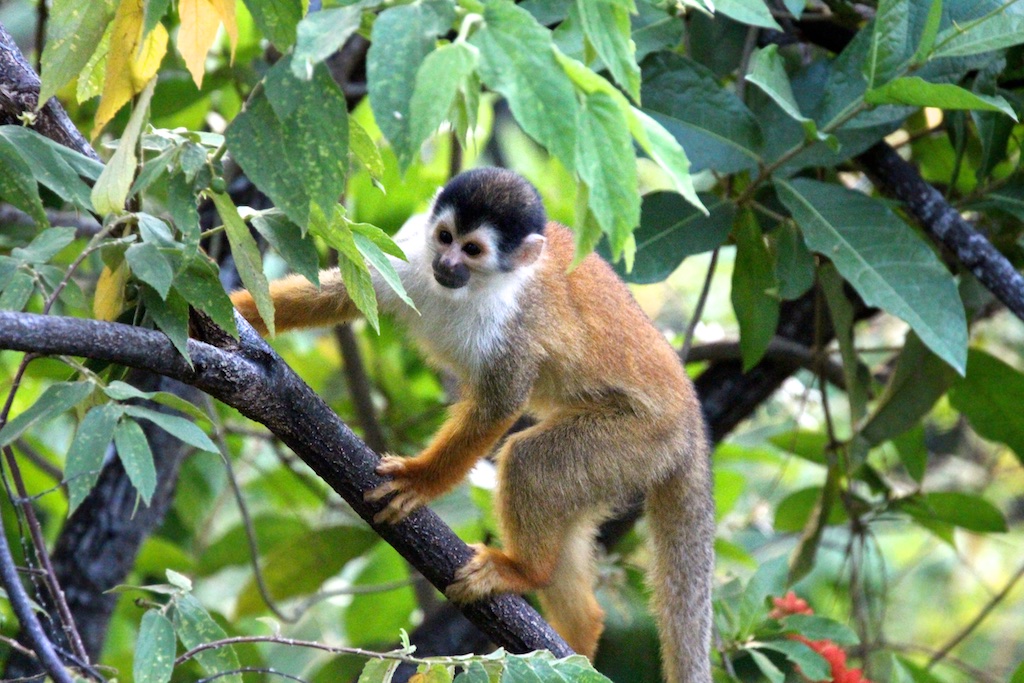 And now, the Macaws. Oh oh oh oh, the Macaws. The Osa Penninsula is perhaps the only place on earth that you can see Scarlet Macaws as frequently as you would blue jays in a Wisconsin summer. It was the beginning of nesting season, and so we had the joy of watching several pairs at their nest site. 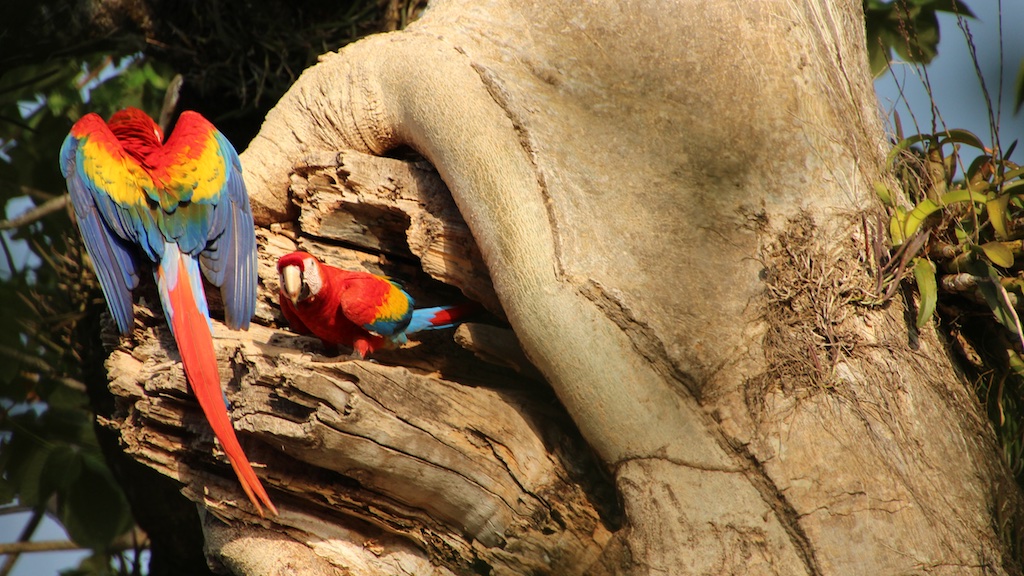 Macaws pair for life. This pair was either involved in courtship or simply pissed off at each other, because, really, what couple doesn’t have a bad moment? I got to watch them spar for a good fifteen minutes, seriously one of the highlights of my life. 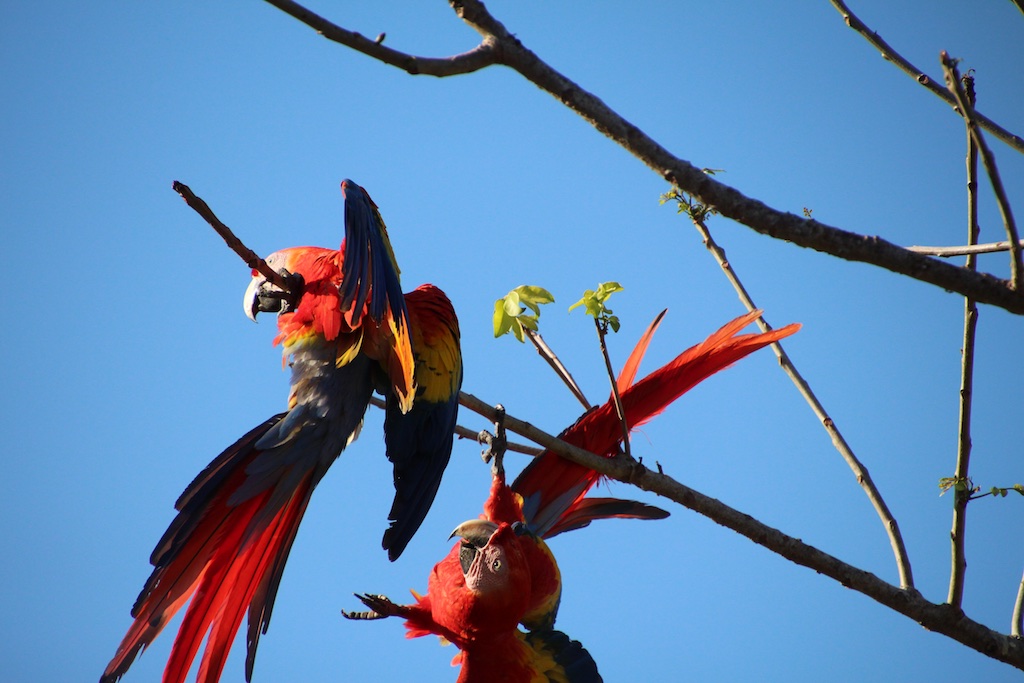 One of the most beautiful sights on our trip was watching Macaws fly overhead, almost always in pairs. We got to do it often, but it was worth the entire trip for me to see it even once. Some of you may recall that I got to train a Scarlet Macaw (captive bred, of course) at Natural Encounters a few years ago. His name was Iago, but I called him George.  Iago seemed like rather a lot of baggage for a parrot to carry.

No baggage on these birds, such a joyous sight throughout the day. 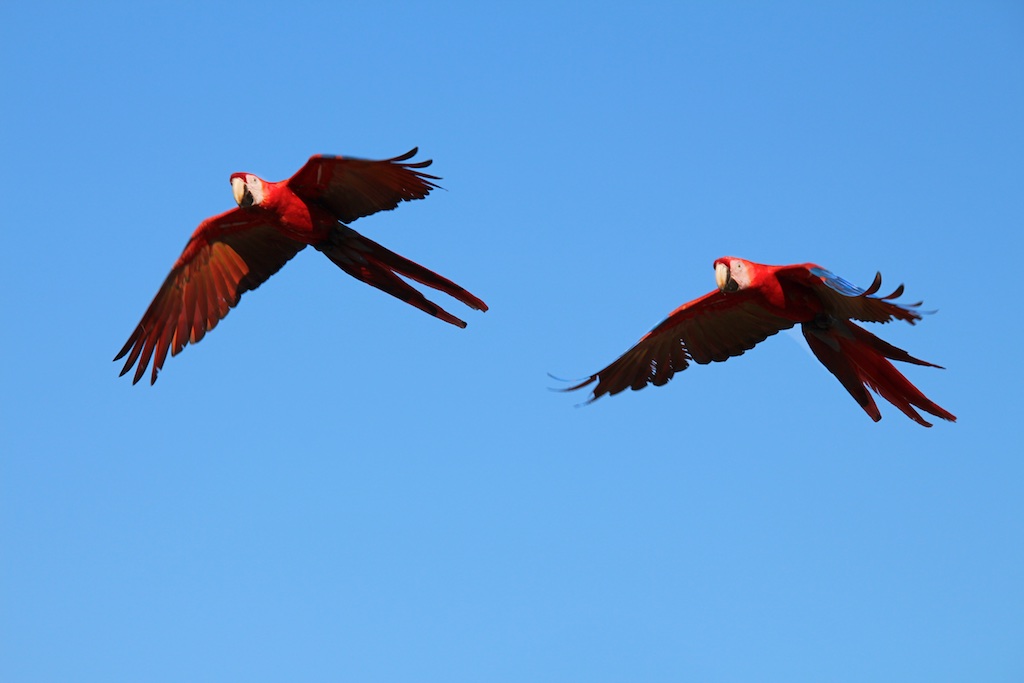 For those of you stuck in the depth of winter, I hope these photographs are a welcome distraction, rather than a frustration about the ice, snow and winds you might be dealing with.
MEANWHILE, back on the farm: Uh. . . ice, snow and wind pretty much wraps it up. I’m not going to say much here because I probably have used up my photo-credit with the pictures above. In weeks to come I’ll add a photos of more of the birds and mammals (Tapirs! Margays! Oh my!) because, well, I can.
Here’s hoping there is joy and color in your life right now too.
« Book Reviews: The Dog & The First Domestication
Scent Games »