Welcome to an ongoing inquiry about the behavior of people and dogs.
Blog Home >> Dog Behavior >> More on Play

I thought you might be interested in two of the books I am using as references for my talks on play behavior. One is Animal Play: Evolutionary, Comparative and Ecological Perspectives, by Marc Bekoff and John Byers. It’s not new, (1998) but it is considered a classic in the field. Bekoff has done a lot of work on play in canids (and also on animal welfare). Byers has studied play as well, but is most well known for his lifetime of work on Pronghorn antelope (who he describes physically as “a sausage with toothpicks stuck in it for legs.”) (I might not have the quote exactly right, but it’s close!)

Another valuable book is Play and Exploration in Children and Animals by Thomas G. Power (2000). It’s comparative perspective is fascinating. Neither of these books are beach reading: they are written for academics, so don’t get them unless you are seriously interested!

I won’t be talking much about the information in the play book that I wrote with Karen London, Play Together, Stay Together, because my talk on play between people and dogs is only 45 minutes, and I want to emphasize the two problems I think are most important for professional trainers to address to their clients: clear signaling from person to dog, and preventing over arousal when dogs play.

Speaking of play,  here’s a great photo by a professional photographer, Patricia Thomas, who I met at the seminar in Atlanta: 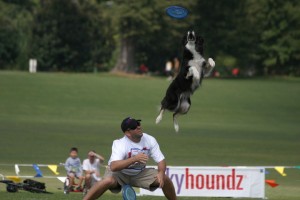 « Play in People and Dogs 2, Fall at the Farm
Play and Self Handicapping »