Welcome to an ongoing inquiry about the behavior of people and dogs.
Blog Home >> Animals >> More on Play Styles; Dealing with Problem Players

I’ve loved your comments about play styles after the last post. Keep them coming. One of the points that was made by many of you, that I think bears repeating, is that many dogs can adapt and learn new play styles from others. This is especially true of stable, well-adjusted dogs who aren’t overly reactive to something new or challenging.

Along with chase games and wrestling, several of you mentioned hounds (and English Shepherds!) who like to play “catch the prey” by chasing, play biting and then mock attacks at the throat. Another mentioned a play style that I’ve also seen, that I consider truly problematic. In this case, the dog chases another dog until he catches up, and then bites the chasee, often in the back leg, and brings him or her down. Eeeps. I’ve seen this quite often, and it often appears to me that the dog in question has not learned about the importance of “self-handicapping.”  Some of them even seem to have switched from playing to predation. Of course, that’s one of the tricky things about play–it’s actually hard to define because most of the actions of play are seen in the context of fighting or predation.

However, in healthy play, the participants exhibit “self handicapping” so that they don’t injure or scare their play partner. (See my post on September 10th, 2009 for a discussion and video of self-handicapping). When I see it happen I intervene without question. I’ll first try a loud, abrupt yelp, as if there had been an injury. That will often interrupt play, and I’ve seen some dogs adjust their enthusiasm as if it was their play partner who had been injured. However, I’ve also seen plenty of dogs who did not respond to a yelp. In that case I’ve tried, sometimes successfully, intervening by moving as quickly as possible between the two and body blocking the transgressor. I’ll look directly at them, use a low voice, say absurd things that the dog couldn’t possibly understand but that feel good to say (“You are one total loser dog and are going to be in big trouble in a minute…”) and back them up a good ten feet or so (depending on the dog).  That has helped with several dogs, in that I can then use a verbal warning (“AH!”) when they open their mouths to bite.

I can’t tell you exactly how many dogs that has helped, but many dogs do learn to adjust their play styles, and I’ve had good luck with it with lots of dogs. It doesn’t work on all dogs with this particular behavioral problem, but it’s worth a try.

There’s so much to say about role reversals, play styles and social status, (and yes, I do want to address the issue of ‘status’ soon), but here’s one point I’d like to bring up now: I talk more about role reversals in my Play Seminar DVD, but the research of Ward and Smuts found role reversals common in what they called “pushes, tackles, and chases.” They found almost no role reversals for “mounts, giving muzzle licks and receiving muzzle bites.”  There was (in keeping with some of your comments and with my observations over the years) no sex effect on type of play or on role reversals.  (However, female dogs did prefer to play with other females  within their own litters… interesting, hey?) They also found it common for one dog of a dyad to always be the one “on top” (in wrestling, for example), countering the hypothesis of some researchers that play always had to follow the “50/50 rule,” in which each player role reversed during each play session.

I think what’s most important is that play is a profoundly complex behavior, and that so much can be going on within it, depending on a dog’s breed predispositions, personality and experience. My favorite video of a play sequence, by the way, is from Pia Silvani, of two Terv’s meeting for the first time, and adjusting their play styles as they become more familiar. It’s truly a gorgeous example of healthy, appropriate play. It’s on the Dog Play DVD for those of you who haven’t seen it. I am ever grateful to Pia for letting me use it. (And it makes me all oxytocin-y too, it makes me want to get out some candles and a white table cloth for the 2 of them . . .)

Meanwhile, back on the farm: White white white. Snow snow snow. I’m about to take up luging. See that red sled by the barn . . . think I could make it down the hill behind the barn in record time in it? 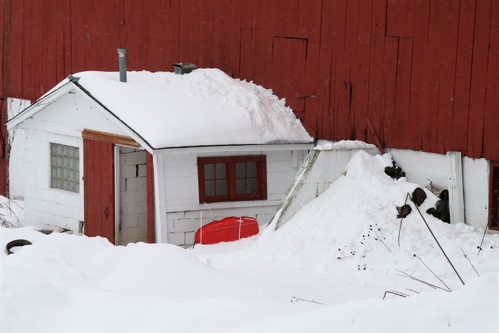 In this next photo, Willie heard a truck on the road behind him. Interesting, I didn’t see his face as looking worried when I took the shot, but I do now. Humm, am I reading something into it? 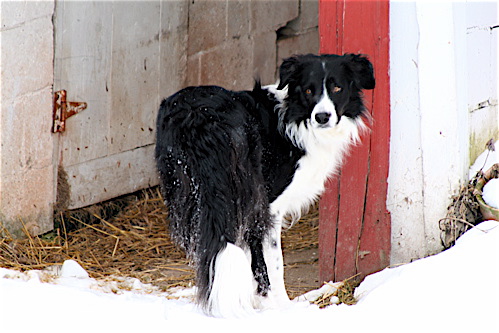