Welcome to an ongoing inquiry about the behavior of people and dogs.
Blog Home >> Animals and the People Who Love Them >> More Ways to Confuse Your Dog

In my relentless pursuit of making mistakes myself so that you can avoid them, here are two recent examples of ways I’ve attempted to confuse my dogs.

The first example relates to Willie charging through the door when we said “Willie, wait”.  He is usually very responsive to the cue “wait”, and I couldn’t figure out why he was barreling out of the house when we asked him to wait at the door. Both Jim and I began getting all primate-like and frustrated when Willie flew through our legs (or into them) after we asked him to stay still.

Fortunately, I took a breath and thought it through, and realized it was me that was causing the problem. (Can you hear me sigh?) Years ago, when I had five dogs, I taught all the dogs to wait at the door when I said “Dogs, wait”. Then I released each dog with their name. For example, “Luke, Luke!” meant that he could go through the door while the others waited.

Yup, you got it. Fast forward to now, and here we were saying “Willie, wait,” with Willie’s name first before the “wait”. Because we have fewer dogs, we stopped doing an “all dogs” wait a long time ago, but I had taught it to Willie when he was young. I forgot about it, but Willie didn’t. All he heard was the release, which is what, after all, I had taught him. [Repeat my sigh here.]

The other example relates to one of Maggie’s physical therapy exercises. One of her tasks is to walk under a set of poles, and I’ve been using my hand as a target to direct her movements. I defined the exercise as being “done” when she moved through the poles and then touched her nose to my open hand. Easy right? Teaching dogs to target a hand is simple, and Willie learned it in an instant.

I thought that Maggie had too, but she kept walking under the poles and then turning her head and skipping the “touch hand” part of the exercise. We did two sessions in which she’d go through the poles perfectly, but then avoid touching her nose to the palm of my hand.

Hmmm. I felt nothing but curiosity about this–what was going on here? Little Miss Maggie is about as compliant and smart as a dog could be. The second time around I figured it out in one of those head-smacking moments of obviousness. Maggie’s visual stay signal is… yup, an open palm directed toward her face. And this is what Maggie saw when she finished walking under the poles: 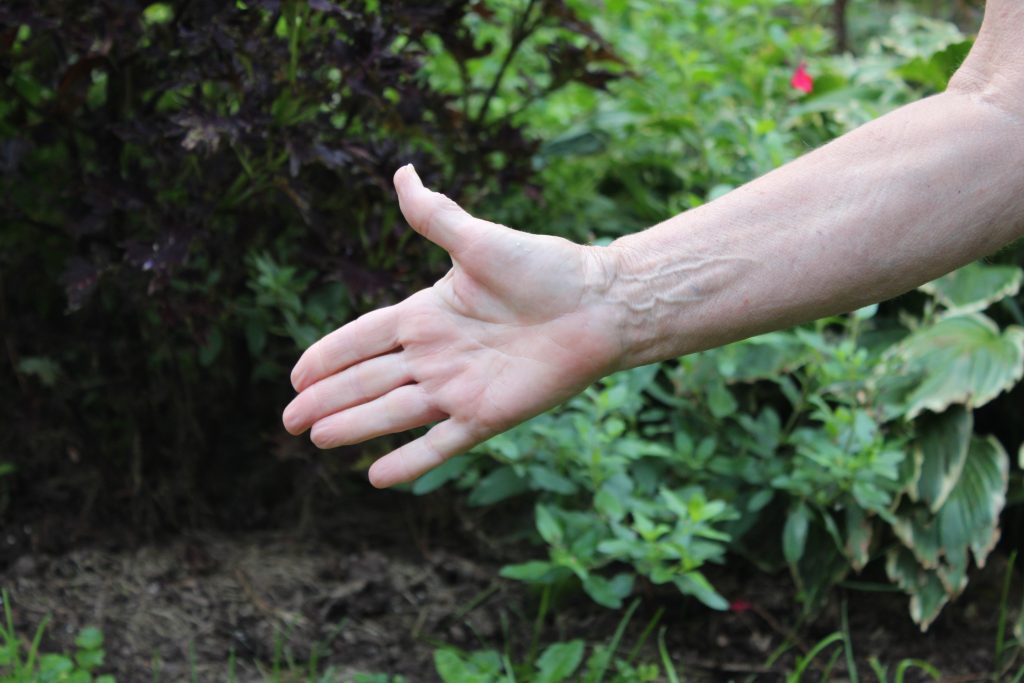 I didn’t relate the two at first because when I ask for a stay I am standing and my hand held vertically. But to her, it looked similar enough, but even more intense because it was right in front of her face.

I switched the visual signal to my fingers pinched together as shown below, and she immediately touched her nose to my fingers 100% of the time. 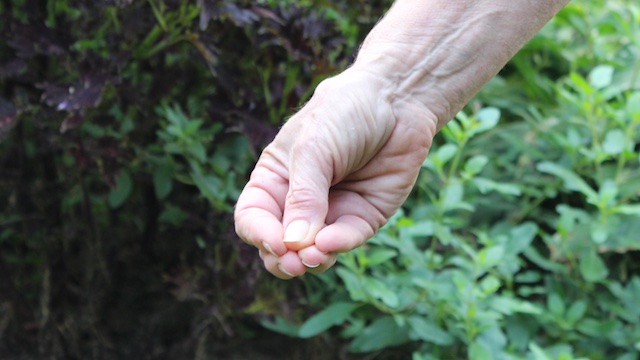 Oh, our poor dogs. So often we think we are being clear, and yet we are  confusing our dogs left and right. It’s a miracle they haven’t all turned on us as we sleep.

But we do have to forgive ourselves for not always being able to put ourselves in their place, keep asking ourselves “Why is he doing that?” and “Why is she NOT doing that?”, and educating the public that their dog is probably not being “disobedient” because she is trying to take over the pack. She’s just confused.

Hopefully these examples will help others avoid miscommunications of their own. Any you’d like to share to help all of us be better best friends to our dogs?

MEANWHILE, back on the farm: One of the best parts of last week was getting to see two friends and colleagues on Sunday afternoon. Friend and CAAB Dr. Pam Reid was at an agility clinic close by and I got to visit with her and watch International-level agility dogs knock my socks off with their speed and well, agility. Here is her amazing twelve-year old International Agility competitor, Snafu. Yup, twelve. Yup, amazing. 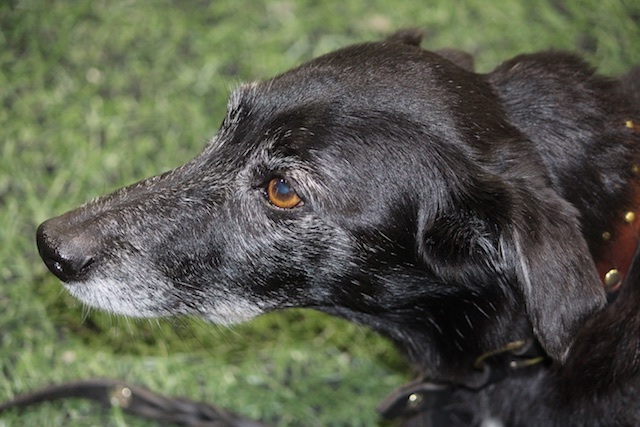 Visiting with us was kick-ass animal trainer Laura Monaco Torelli, who came out for the afternoon from Chicago. More photos from that visit later. 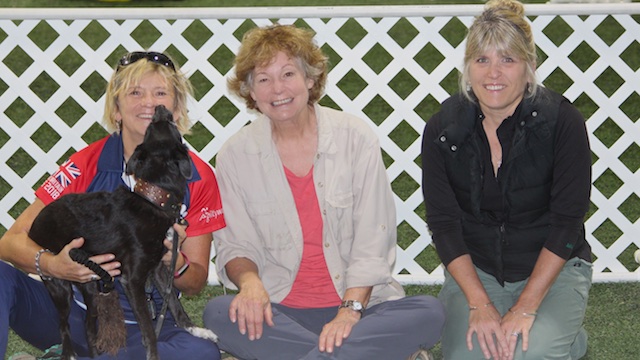 I took some photos at the Agility Clinic, but put the camera down after awhile because I just wanted to enjoy being there. Here’s a dog going through the tunnel: 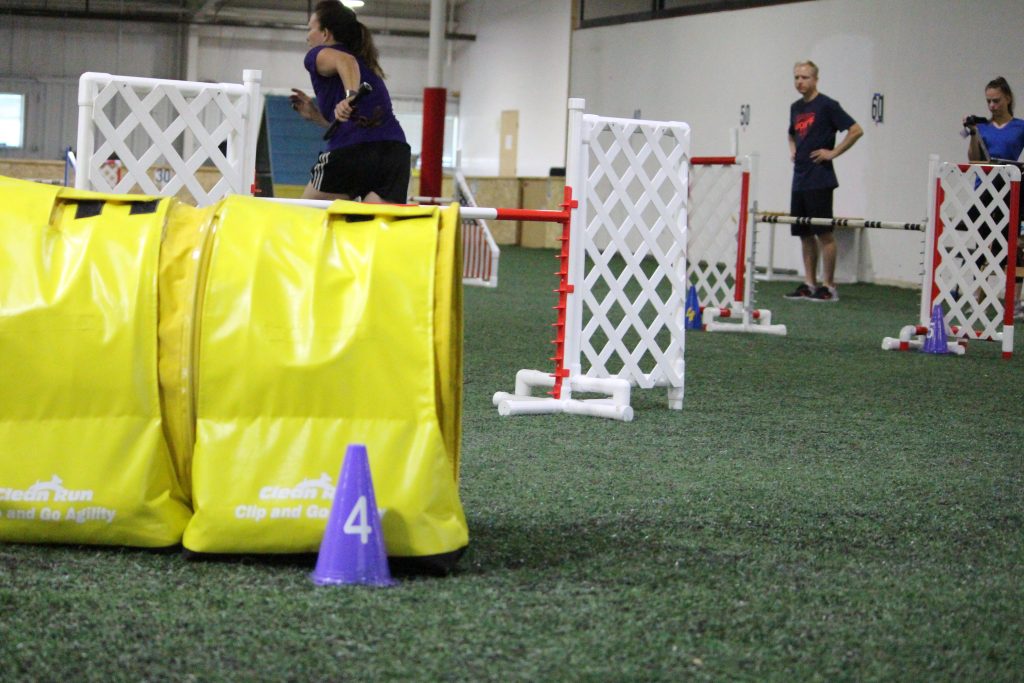 Oh wait, it’s already in the tunnel–because it was moving somewhere around the speed of light. Never mind. But here’s a fuzzy photo of Shawna Richgels, the founder of  Canine Sports Zone in Middleton, and her well-named dog, Charisma. I include it only because even though the resolution is poor, the intensity of both person and dog leaps off the page. 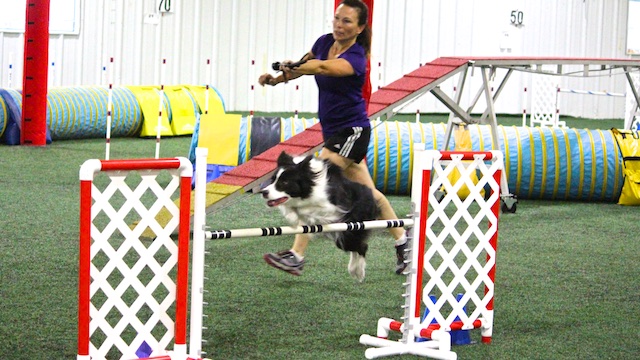 Lots going on here, more next week about all that. Off to paint the pergola!