Welcome to an ongoing inquiry about the behavior of people and dogs.
Blog Home >> Dog Behavior >> Mounting By Any Other Name…

A long, long time ago I had an intact male Border Collie (my first BC ever, Drift), who appeared to be failing his job as a stud dog. Although his escort, the lovely Tib, could not have been more clear that she was ready to be bred, Drift couldn’t seem to get the job done. Tib would prance around Drift all shiny-eyed, literally throw her rump in his face and flag her tail so far over to the side that I wondered if it might break off. Drift behaved as though he got the message loud and clear, and would enthusiastically mount Tib from behind. But then he would make one or two thrusts, and his entire body would appear to deflate (not to mention his equipment) while he slumped off to the side. Tib would respond by again throwing her rump at his head and flagging (the clarity of a female dog’s intent when performing this action is impressive, if not almost embarrassing), Drift would mount her anew and again slide off as if someone put a pin in a balloon.

With time running out, female dogs don’t ovulate for all that long after all, I drove both dogs to the UW Vet School to see if something was wrong with Drift or Tib. Nope, they both checked out fine. One of the specialists there suggested I try artificial insemination, and proceeded to school me on how to do just that. If you want to know what it was like to have a 6’6″ man ask me if I knew how to “collect a sample,” and then use my thumb and his hand to demonstrate stimulating Drift to ejaculate, you will have to buy me a martini and ask after I’ve drunk the entire thing. Fast.

I never did have to collect a sample. I figured out the problem by putting on my ethologist’s hat and watching the two dogs carefully as they courted. Once I did, I noticed that right before Drift slumped off, his head turned one or two inches toward me. Humm. I moved to the other side, and sure enough, this time Drift’s head turned the other direction, but again toward me. I then put the two dogs in the garage and left them alone. When I came back in five minutes they were tied (and the breeding was indeed successful.) Here’s what I think was happening: Drift was a two-year old intact male when I got him, and just a few days after bringing him home he enthusiastically began to mount and thrust against the leg of a female friend of mine. I said “NO!” in surprise, and said the same a few weeks later when he tried it on another friend. I suspect that Drift remembered that I had corrected him for mounting, and did not distinguish between mounting my friend’s leg from mounting a female dog in heat.

I tell you this story because 1) it still amuses me even many years later, and 2) it illustrates that what we call “mounting” can occur in a variety of contexts and most probably has a variety of motivations. I am writing about this topic because it is one of the ones requested by readers, and I think it is a great one. One comment mentioned that “mounting” is often labeled as a sign of “dominance,” and yet the dog she has that does it most often is extremely submissive in all other contexts. The reader correctly questions whether mounting is really just about the D word…

Which brings up the question: Why do dogs mount others, anyway? Clearly Drift was mounting Tib to copulate with her, but why did he mount the legs of my girlfriends? Dominance? Mis-placed sexual stimulation? Doubtful on all counts. No one really knows why dogs mount others outside of reproductive activity, but here are the best guesses of a variety of experts:

1. Excitement or arousal: I love the way Peter Borchelt, a fellow CAAB, puts it: “There are only so many behaviors a dog has access to, and dogs do what is part of their species-typical behavior.” In other words, arousal causes individuals to want to do something, and since dogs can’t take photographs of each other or check email, one of the actions they can perform when they are excited is to mount each other. Arousal can be positive (yippee!) or negative (I’m so nervous), but it usually, like anger, asks for some kind of action.

2. Attention-getting or play solicitation: Notice me! Notice me! Surely it is hard to ignore a dog who is clasping your hindquarters…..

3. Status related: Certainly this could be true in some circumstances, especially if the mounter in question is also exhibiting postures usually associated with priority access to preferred resources (direct stares, high head and tail postures, etc.) However, Mark Bekoff, in his blog about mounting, mentioned that he found no correlation between mounting, clasping or humping & dominance in young dogs, coyotes and wolves. On the other hand, Camille Ward, in her PhD research, found that mounting was one of the few play behaviors she studied that was”asymmetric,” in that while two playing dogs alternated who chased whom, they did not alternate who mounted whom. Dog A may mount Dog B, but not vice versa.

4. Control: I consider this a very different category than the one above (although I notice that they are often mentioned together.) Here’s an example of what I think of as control-motivated mounting: Dog A observes two others playing enthusiastically, perhaps barking and growling while they do. Dog A is a sound-sensitive dog, or a dog who becomes anxious around increasing energy levels, and so moves in, mounts one dog as a way of stopping the action. We often call these dogs the “play police,” right?

There’s more to this story. How do you define mounting? Does mounting always include clasping and thrusting? What about what is called “Standing Over,” in which one dog stands at right angles to another and puts its forelegs over the shoulders of another dog. Is that a version of mounting, or something different altogether?

If you are interested in reading more about this topic, I refer you to the excellent article written by Julie Hecht (the author of the great blog Dogspies) in Bark magazine and a post by Mark Bekoff also about the topic. If you like watching and evaluating videos, here is one that includes both “standing over” and full scale “mounting” during plays sessions between Willie, and 2 young dogs. I’d love to hear what you think about what you are observing. I’ll check back early next week and chime in myself.

MEANWHILE, back on the farm: If I was reading this blog I’d be getting tired of hearing complaints about the weather, and how it was 3 degrees Farenheit yesterday morning and we are all somewhat stunned at the relentless, and untimely grip of winter. So, no more complaints (although you noticed I already managed to do so?), but a few words of concern for the Redwing Blackbird and Starling males who have arrived back from the south in order to claim the best territory before the younger males arrive. They may get the best territory, but then, they may starve to death too, because there is pretty much nothing but snow and ice out there to eat right now. Normally it would be in the mid-40’s and things would be starting to thaw out and even grow.

Here IS some good news: Willie and I pushed the sheep up the snow-covered hill in a desperate attempt to try to work sheep again, weather be damned. The flock, understandably, would have preferred staying in the barn yard, thank you very much, and my lead ewe Barbie turned and faced off Willie, her head down and her message clear. “Come any closer and I’ll smash you.” Willie and Barbie have had a long history together, with Barbie getting the upper hand since his surgery, at least if she felt strongly about not going where Willie told her to. But this time Willie stood firm and met her challenge, and darn if she didn’t soon turn her head and stomp through the snow. Willie will never win points for his inherent bravery (me neither) but he beat her fair and square a few days ago and we both walked down the hill a bit taller than we had walked up it.

More good news, for me anyway, is that I’m going off the grid until Monday. It’s spring break at the university and I’ve decided to attempt to wean myself off my iPad and laptop and desk computer and all other devices that keep me connected to a wonderful world but make it harder sometimes to savor the world immediately around me. Katie will post blog and FB comments, I will absolutely adore reading them all when I return to cyberspace.

My photo for this week is one I took for my photo class, of Nellie looking out the garage window. I love how the “stair step” lines of her head and back follow the lines of the cardboard boxes. 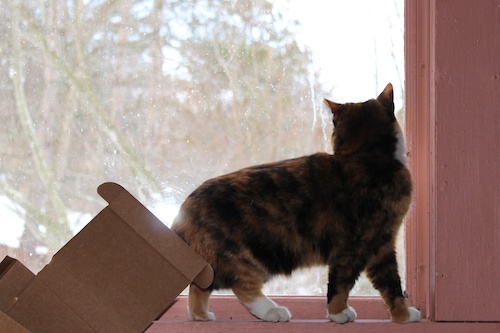