Welcome to an ongoing inquiry about the behavior of people and dogs.
Blog Home >> Animals and the People Who Love Them >> Muzzle Punches, Air Snaps and Tooth Clacking 2018

It being Labor Day as I write this, I’d rather not (labor). So I’ve searched the archives for some of the most popular posts and found a line of inquiry that sucked me into reading all the comments again, nine years later. It all started with a post about “Muzzle Punches, Air Snaps and Tooth Clacking” that I wrote in October of 2009. That post elicited 117 comments. Wow.

The comments about this issue were so interesting that I wrote second piece that summarized people’s guesses/beliefs about what the behaviors mean, and data from the wolf literature.

Here’s what I wrote nine years ago, with some minor editing: (That’s a long time ago.  63 years ago in dogs years?) What have we learned since then?

MUZZLES PUNCHES/POKES: As best I could, I categorized your responses about the context of muzzle punches into 4 categories: Excited/Playful, Attention Getting, Warnings with potential Aggressive Intent, and Affectionate. Here’s how the responses sorted out (as of this writing, there were 81 responses, note some responses contained multiple examples):

The consensus is strong, and I couldn’t agree more, that context and other postural signals mean everything here. Several of you, wisely, distinguished between ‘muzzle punches’ and ‘muzzle pokes,’ the former being much more forceful than the latter. I appreciate that distinction–I am going to start calling much of what I used to call a ‘punch’ a ‘poke’ (is there a song here?). I also agree completely that, as someone quoted me saying, “It depends,” is the best answer to all behavioral questions.

A muzzle punch given to the face from a dog who had been giving you a hard, cold stare directly into your eyes is something altogether different from a dog who pokes you in the back of the leg with no eye contact. I would be extremely concerned about a dog who gave me a hard, direct stare and then ‘muzzle punched’ me.

It seems to me there are at least three messages here: Pokes: 1) YO! YOU! Pay attention to ME! or 2) YO! YOU! Wanna chase me? Wanna play? Wanna react in some way for heaven’s sake?” and (Punch) 3) I’m warning you… back off. I also think there is a possibly 4th component here related to herding dogs. Willie changed from biting at my ankles as a puppy when I ran to the phone, into muzzle punching the back of my leg when I ran to the phone, to racing 2 inches behind me while I turned my head and said “Willlllllll……….” to keep him from punch/poking the back of my leg as I run to the phone. I’ve seen this kind of reactivity and mouthiness in a lot of herding dogs. Yesterday Will played with a 6 month old BC puppy who has just started trying to grab at anything that moves, in this case a walking stick. Will does the same thing: pick up a hose, and Will wants to grab it. Pick up a lamb, and Will wants to punch at it or grab it. In the case of the pup, it was very clear that it was extremely  hard for him not to react to the moving stick…..GOTTA STOP THAT THING FROM MOVING!!!

I was interested that Zimen described these muzzle poke/punches (exactly as done to Tulip in the video from the first post) as a wolf “quickly pushing its nose into the other’s fur…”. He categorizes it as a neutral social contact, neither offensive or defensive, and speculates that it relates to “olfactory control.” I’m not sure what he means by that, and I’m not convinced that when dogs do it it has anything to do with scent. (Update, 2018: Since readin this I’ve seen instances in which it DID look like a dog was pushing its nose into the fur of another and inhaling deeply. Interesting, yes?) Although.. I’ve taught Will to sniff on cue and I’ve found that he will often push his nose into something I’m holding him to smell. But then, I’ve taught him “Touch” too, and my guess is that he’s confounding the two a bit….

Interesting difference with “Muzzle Punches.”  Several of you have seen your dogs do it in what sounds like appropriate play, but only one of you described it in an Attention Getting context. Regarding “Aggressive warning” versus “Playful”, surely this is yet another example of context and other signals being critical to interpretation. Thinking back (always dangerous), it does seem to me that I’ve mostly seen them in a context I’d either describe as a warning (in response to “Lie Down” for example, with direct stare to my face) or in play. Again, it seems that an air snap from a playful dog with a loose body, partially open mouth, squinty eyes would mean something very different than a dog who turned and snapped at your hand while you were trying to groom. That may be one important distinction: is there any obvious target of the snap, or is the dog just snapping in the air?

TOOTH CLACKING [not ‘chattering’, see below]

Clearly, fewer of you have seen this behavior, and I have to say I’ve probably seen it least of the 3 myself. I have seen a few client’s dogs who stared right at my face and tooth clacked, usually in response to a cue I had given them (similar to the lie down cue above.). In that case I perceived it as a warning. Like many of you, I’ve seen dogs do it when they were aroused, usually during play. One of you mentioned, and I thought this was very interesting, that her dogs did it after their arousal levels increased during play, and the play stopped (arousal inhibition?) for a while after the clacking.

Zimen, by the way, calls this “Snap Clatter,” I lovely description I wish I’d thought of myself. He describes it in the packs he’s watched as an “Aggressive Behavior involving inhibited biting,” and as a “noisy beat made by the teeth when jaws hit together.” It is very different from the much more rapid jaw movement of an extremely excited dog, which most people call Tooth Chattering.

By the way, there are 3 other actions that were introduced by your comments: Smiling, Nibbling and the Jaw Chattering associated with “Flehman,” when male mammals test urine for the presence of the molecules associated with oestrous cycles. I think smiling deserves its own post (as requested) and to the commenter whose dog nibbles on her like an ear of corn, Yes! It’s social grooming and is motivated by affiliative and friendly behavior. No fleas on you!

Here are two photos, taken by a vet student friend and colleague (and owner of the lovely Dobbie, Miska) illustrating another posture described by Zimen: He simply calls it “Imposing Behavior” in which one wolf stands next to another, body lifted as if by balloons, head up and tail up.  Miska is the ONLY dog that Will has ever met who is faster than he is, and she is one of the only females he has played with very much (mostly due to who he’s met, I can’t say yet if he has a gender preference). In my mind, Will is absolutely gobsmacked by Miska. He can’t get enough of playing with her, tries to stop her forward motion whenever he can (a few weeks ago he ran in front of her and lunged toward her, she responded with a half a second worth of bitch fury  (most appropriate).

After that, Willie seemed to be even more enamored of her but ran outruns around her rather than body blocks, air snaps or muzzle punches to stop her moving forward. He appears to be fascinated by her, but is very nervous when with her in the house–tongue flick-ey, snake headed, i.e., Willie’s evil twin-y. 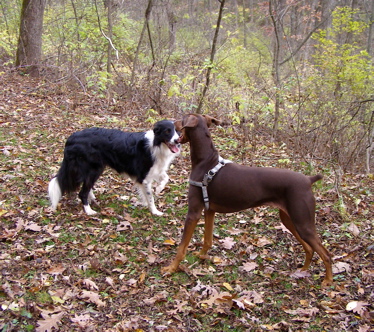 I love Will’s face in this one and the image of 6 month old Max trying to keep up and play with the big kids…. Thanks to Lesanna for the photos! Me thinks Willie’s in love. 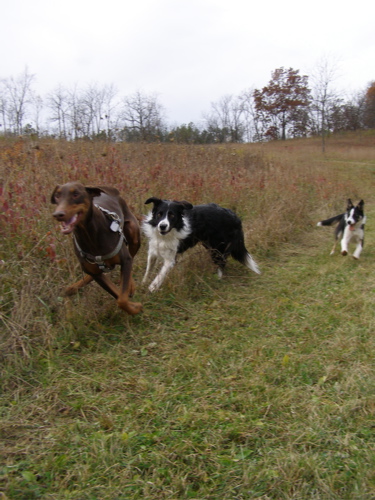 MEANWHILE, just back on the farm this afternoon. We were at the Wisconsin Working Stock Dog Annual Sheepdog Trial in Hudson, WI. Regrettably we were there without dogs, because I couldn’t bear to go and torture Maggie. (Thank you Janna for keeping up Maggie’s PT!) But it is such a lovely place, and it was a great trial with some phenomenal work on tough sheep by skillful dogs and savy handlers.

Here are a few of my favorite images: 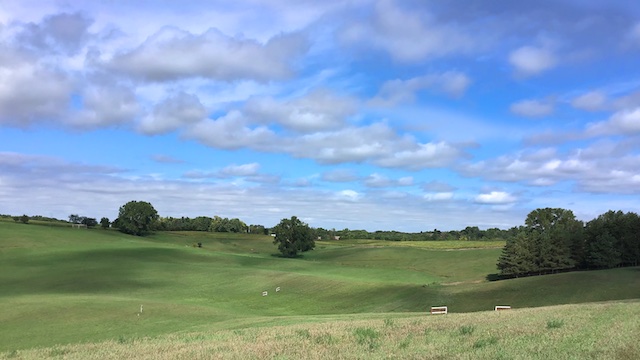 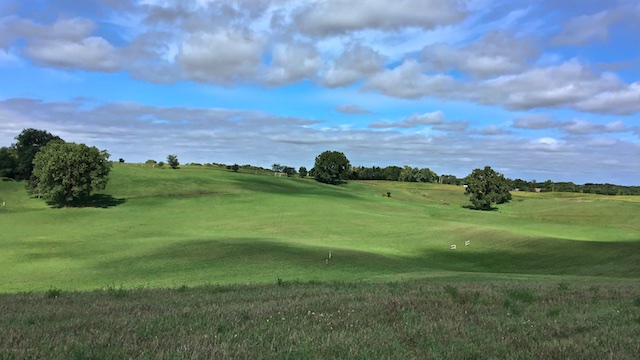 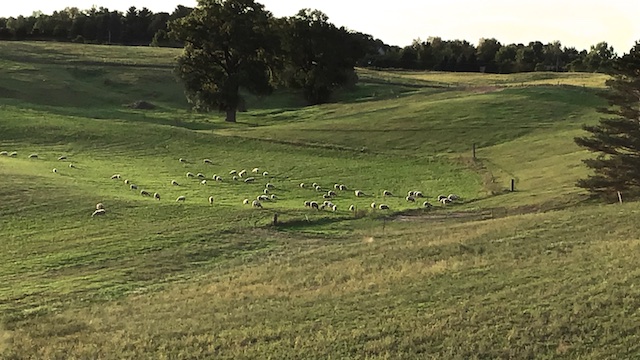