Welcome to an ongoing inquiry about the behavior of people and dogs.
Blog Home >> Cats >> Need Your Advice and Ideas! [Stay tuned for Podcast…]

I’m working with some wonderful folks to get a web/pod cast radio show going, and would love to hear from you about it. First… what the heck should we name it?  We can’t, obviously, use Calling All Pets.  We had talked about Calling All Critters or Calling All Animals, but we are going to have to start simple, on a shoe string, so are only going to be able to answer email questions rather than phone calls. Thus, “Calling All.. ” doesn’t make sense any more. The plan is to start with a half hour ‘show,’ with a guest interview as before, and me answering a few questions about training and behavior. Any ideas about what to name the show?

Here’s another question for you: Although Larry Meiller wouldn’t be available as a co-host, there is someone else who could act as co-host, sort of an “everyman” foil to the trainer/expert voice that I would provide. What do you think.. should I be the only host, or do you like the interchange between two people? (I do myself, but am concerned about it on a half hour show….).

Last question, I promise: Even though we’ll start the show on a shoe string, there are still costs involved. Is this something you would consider paying for, something like down loading music? Should we take ads? Should we just count on winning the lottery and do a show a day for the fun of it? (The plan is to do a 1/2 hour podcast every week, starting in early June.)

I am sincerely interested in your thoughts, and greatly appreciate all the support so many of you have sent over the months since WPR canceled Calling All Pets.

Meanwhile, back at the farm: It’s cold again, was windy and under 10 degrees (but at least no snow) this morning. We did have an ice storm Sunday night, lost power for 5-6 hours, right in the middle of a great documentary… darn. But it’s sunny now, so good to finally see the sun again. It’s going to warm up soon, a good thing, because my wooly sheep are getting shorn on Sunday. I’ll post photos, it’s quite the annual ritual. I love the seasonal nature of it, I love the feel and smell of the wool, I love watching the previously hidden bodies of each of the ewes appear from under their blanket of wool. Then just a few weeks til the next batch of lambs. Lambs! Oh boy…. lordy I do love them.

Here’s Sushi this morning at the top of the stairs, reminding me that both she and I need to go on a diet. I tried to get rid of  her eye shine and ended up making her look like an animal from a horror movie. “When Cats Go Bad” or something… I was going to switch it but it made me laugh, thought it might you too. And here’s a photo of Lassie and Will at bottom of the stairs, wondering no doubt what the heck I was doing with Sushi at the top. 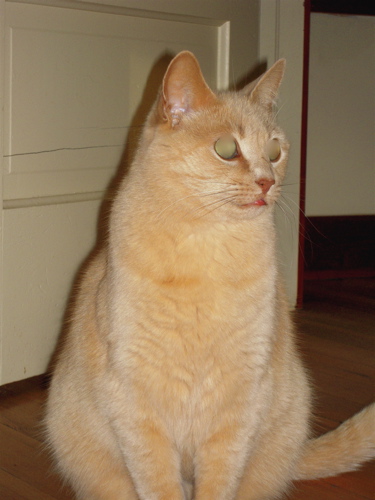 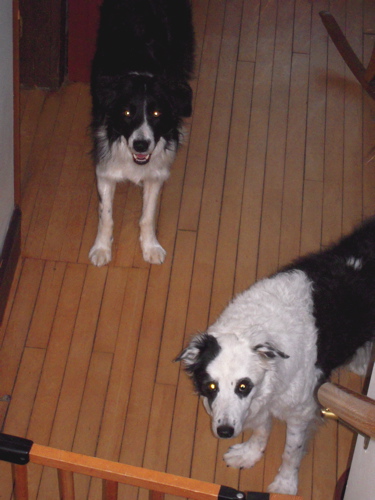