Welcome to an ongoing inquiry about the behavior of people and dogs.
Blog Home >> Animals >> Nim Chimpsky; Spring is Coming!

I finished a book titled Nim Chimpsky: The Chimp Who Would Be Human by Elizabeth Hess. It’s an interesting book, although I admit to mixed feelings about it. On the one hand, it is a fascinating account of a research project designed to determine if a language is a uniquely human trait, or is something that can be used and understood by a non-human primate. It was initiated by a Columbia University psychologist named Herbert Terrace. Terrace was interested in challenging Noam Chomsky’s  contention that language is exclusively human (thus the name of the chimp as Nim Chimpsky, I always did love the pun). Mind you, he was not talking about labeling objects or using sounds to communicate; specifically he argued that syntax, or the use of the order of words to create meaning, is uniquely  human.

The book describes the dramatic and often tragic life of a chimpanzee who was taken from what was basically a breeding farm for research primates and sent to well-intentioned people who clearly knew virtually nothing about chimpanzees. Neither did they seem to know much about American Sign Language, which was successfully being used by other researchers (Roger Fouts for example) to communicate with non-human primates.

To say that things often didn’t go well is an understatement. There were a long list of reasons for that, but Terrace himself is clearly part of the problem. (As are all the scientists described in the book, who come across as arrogant and difficult. Heaven knows I’ve met my share of the same, but I am a bit skeptical of some parts of the book, since all the scientists come off poorly and all of the caretakers much better.)

However, I can tell you that there is little disagreement in academia that Terrace’s project was poorly executed. After Nim was passed around from one exhausted caretaker to another, with literally dozens of different trainers who knew little about ASL themselves, Terrace wrote a hugely popular book, Nim. In it he concluded that, contrary to his expectations, chimps could NOT ever learn or use ‘real grammar’ or even understand the simplest concepts of human language.

Critical as it is, I wish that Hess’s book mentioned that Terrace’s conclusions slammed shut the funding for any more ape language studies for years, if not decades. I was at University when it came out, and was going to Animal Behavior Society meetings and listening to the few people trying to continue language studies commiserate that their funding had been pulled because of the book (including Irene Pepperberg with her parrot Alex) . Terrace seemed to take the relatively radical approach that not only was Nim incapable of understanding syntax, but that he didn’t even understand what the words symbolized. He argued that Nim was just mindlessly mimicking. (And yet, when poor Nim was returned to a clearly abusive environment, Terrace suggested that Nim himself be asked if he was happy there…!).

A reviewer on Amazon suggests that it is best to read both Hess’s and Terrace’s book to get the full picture. I agree, and I’d add a suggestion to read Roger Fouts’ book, Next of Kin as well. I wish the book Nim Chimpsky talked a bit more about the what the research was really about, and I wish there was more discussion of the impact of Terrace’s conclusion. But overall, it is a fascinating, compelling (and sad) read, a real page-turner, as well yet another story of how much pain and trouble can be caused by not taking the trouble to learn about a species, much less an individual, before you interact with them.

Meanwhile, back at the farm… Willie and I worked sheep on Saturday and glory be, no limp at all from his bad shoulder. I won’t bore you with the details, but the surgery scheduled for Thursday has been canceled, at least for now. Could it be that chinese herbs, homeopathic medicine and western medicine sans surgery could be enough to cure his shoulder? Cross your paws for us. I am going to continue to monitor him and if necessary, bite the bullet, do an MRI at the Vet School if necessary early in summer and go from there.

Other good news is that it was gloriously warm this weekend. Almost all the snow is gone, and look.. the bulbs are coming up at Redstart Farm! 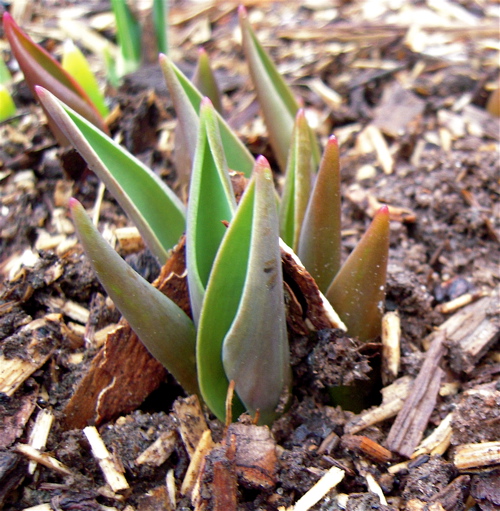 And here’s Sushi on Jim on the couch in the sun… she thinks this warm, sunny weather is cat heaven. 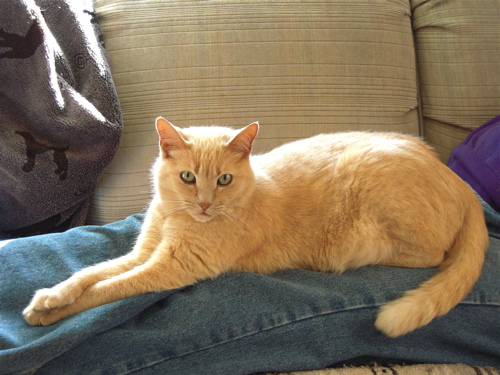 « Personality versus Temperament; Poor Spot
The Importance of an Emergency Stop; Fetching a Tree »