Welcome to an ongoing inquiry about the behavior of people and dogs.
Blog Home >> Dog Behavior >> Not Guilty, As Charged

One of your fellow blog readers alerted us to a study recently published in Behavioral Processes titled “Disambiguating the “guilty look” by Alexandra Horowitz. It is a creative and well-designed study that supports what trainers, ethologists and behaviorists have been saying for years: “No, your dog isn’t expressing guilt when he cowers at the door when you come home to find he’s peed on the carpet. Rather,  he’s waving a white flag, perhaps to inhibit you from punishing him any further, and is responding to YOUR behavior rather than expressing guilt at his earlier actions.”

Here’s a summary of the study: 14 dogs and owners participated, and only dogs who were able to successfully perform a sit/stay were included.  The owner was instructed to place the dog on a sit/stay, and then show the dog a treat and use whatever cue they would normally employ to forbid the dog to take the treat (I’m assuming “no” or “leave it”). The treat was placed at the same distance from the dog in each trial, and then the owner left the room.

When the owner returned the treat was always off the floor.  The experimenter either picked up the treat and gave it to the dog, or picked it up and kept it herself. When the owner returned, he or she was informed by the experimenter if the dog had been obedient or not (not necessarily accurately). If the owner was told the dog had been obedient, the owner was been told to greet the dog on their return. However, if they were told that the dog had been disobedient, they were told to scold the dog in whatever way they would normally do. (Note that one potential pair was eliminated because the owner refused to scold the dog. Interesting. What would you have done? I think I would have participated to support the research, but kept my ‘scolding’ to the disappointed voice I use sometimes: “Oh Mr. Will…. what did you do?” It’s quiet and low key and yet Willie’s ears go down and his face changes in a way I want to call “concerned.” Needless to say, I never do it “after the fact,” but I probably would have in this case because of my interest in the results of the study. I don’t think it would have set Willie back in any substantial way, but if I thought it would I wouldn’t have considered it.)

In the study, each dog/owner pair was given 9 trials, two control trials in which the dog was allowed to eat the treat, and others in which the owner was correctly informed or mis-informed about whether the dog ate the treat or not.

The dog’s behavior was video taped and later analyzed, categorizing 9 behaviors often used to describe a “guilty look” by owners: head, ears or tail down, raising a paw, moving away from the owner, licking, rolling onto the back, etc.

The results are not only what you’d expect, but even more so: Not only was there no correlation between behavior usually categorized as “guilty” and the dogs who actually did eat the treat, it was found that the highest rates of these behaviors was found from dogs who had NOT eaten the treat and who WERE scolded by their owners. Trials in which the dogs did eat the treat (even though handed to them by the experimenter) and who were scolded showed fewer deferential (my word) behaviors than if they had not gotten the treat.

You can’t get much better evidence for what we’ve all been saying for years: “No, your dog DOESN’T “know  better! He’s just afraid of what you’re about to do!” It’s true that there is a potential glitch in the methodology, but I think the author handles it well in the discussion.  Since the dogs who got the treat were given the treat by a human, even after being told to leave it alone, it is hard to know if the dog itself considered its behavior as being disobedient… the author’s paper after all is about being careful about making attributions (or mis-attributions) and this is a potential problem. How do we know that the dogs perceived themselves as being “disobedient?” The author did do subsequent tests to follow up on this potential problem and I think it does indeed support the original results.

Speaking though, of mis-attributions, I do have a small bone to pick (a treat to take away?) from some of the statements in the paper. Although I have been on record in speeches, books and articles that of all the emotions, guilt is the one least likely to be experienced equivalently by humans and dogs, I am included in a list of “ethologists, animal behaviorists and other scientists” who describe a “dog ostensibly guilty of a transgression…“. My interpretation of her words was that I and others were indeed arguing that “head down, ears down” is the posture of a guilty dog. That, it turns out, is not what she meant: she meant that we had written that pet owners use these postures to describe what they believe is a guilty posture. She clarified that in a gracious email to me after I wrote her about it.

I suspect my interpretation of what she wrote was in part based on something she said earlier in the Introduction: “And yet, ethologists, animal husbandrists, pet owners and others .. frequently use emotional terms to describe or explain an animal’s behavior.”

She is certainly right on target that I, and others are comfortable talking about expressions of emotions in animals. However, I’m not clear why she mentions “ethologists, animal husbandrists and pet owners” etc, but not psychologists, neurobiologists, etc. etc, including those who study emotions in animals and have for many years.

What I think is important here is to help people understand what of their emotional life is shared with dogs and what is not. Pure primal terror or rage, for example, is a profoundly primitive experience, and yet much of our own emotions are overlain with a cognitive component that dogs probably don’t share…  Surely, as I write in For the Love of a Dog, the shared emotional life of people and dogs is a glass half empty and a glass half full.  We need to take this debate beyond the two polarized perspectives of “You can’t talk about emotions in animals” and “I know my dog is guilty! Just look at him!” That’s what I tried to do in the book (and learned a ton myself by writing it.) This study is a good step toward helping professionals convince the general public that people are much too quick to attribute guilt to their dog. My own observations are that dog owners are quick to attribute the emotions least likely to experienced in similar ways by people and dogs, and miss the ones most likely to be shared (like fear). More on this topic, it’s a big one, but I’m curious what you’ve found: what emotions are you, your neighbors or your clients most likely to ascribe to their dogs (and why!)

Meanwhile, back at the farm: Willie has a broken tooth and goes in tomorrow for a general cleaning and a close examination of the tooth. (Large premolar on the top jaw.. of course the largest tooth in the mouth with three roots. jeeeez.) Then we’ll know if he needs a root canal, an extraction or just (oh please!) just a cap on it. Please do whatever you can to help me remember to NOT give Willie his stuffed Kong tomorrow morning. It is such a habit with me I am in angst already that I’ll forget!  Notes will be all over the house!

Here’s a photo of Lassie and her chiropractor, Dr. Mark McCaan. I love the comparison of facial expressions! Anyone want to venture what emotion Lassie’s face expresses? 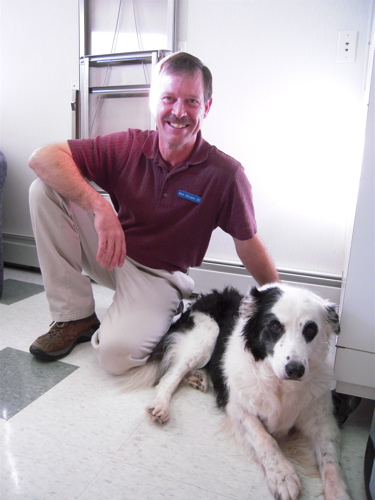