Welcome to an ongoing inquiry about the behavior of people and dogs.
Blog Home >> Animals and the People Who Love Them >> Nothing to Yawn About–Yawning as a Sign of Empathy 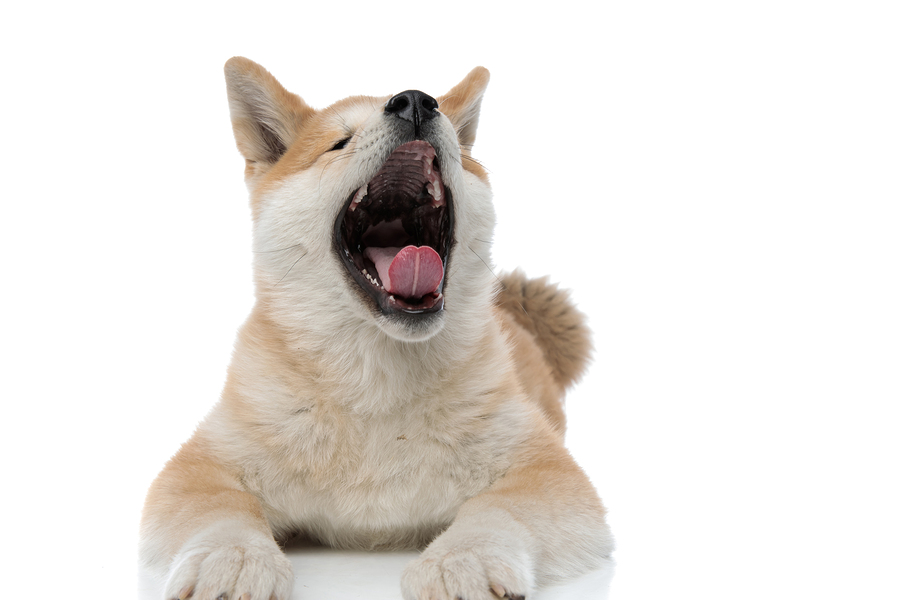 This topic is making me yawn. Literally. I’m doing it as I type this. Not because it’s boring, but because yawning is contagious in a large percentage of people (If one person yawned, then 45-60% of the people observing it yawned themselves, according to one study). You don’t even have to see someone yawn to get the effect: Just reading or thinking about yawning can make some of us yawn involuntarily. (If you are as bad as I am about this, and just the letters “y,a,w…” can start you yawning, don’t feel foolish. It turns out that being susceptible to “contagious yawning” correlates with all kinds of good things, including high levels of empathy, and higher scores on theory of mind. Well, cool, she said, yawning again.)

But you no doubt know that this response isn’t confined to our own species; Dogs respond to human yawns at high rates too. In one study, 72% of the dogs were observed yawning immediately after their owner yawned. But here’s the question that a new study addressed: Why are the dogs yawning? Given that we believe that yawns can sometimes indicate low levels of stress, are dogs yawning in response to their owner’s gaping maws doing so as a sign of mild stress, or as an empathetic response? 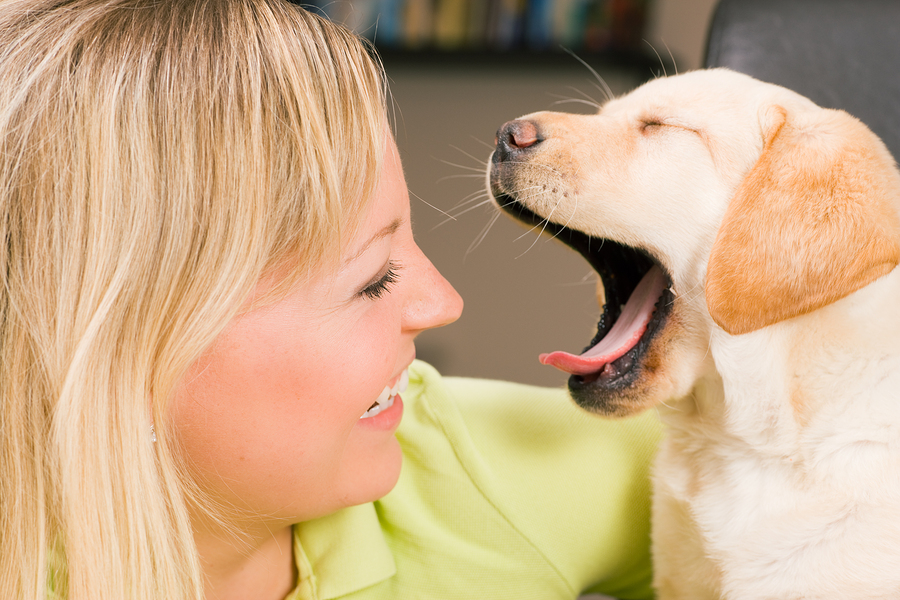 You might take a moment, if you are a science nerd, to think about how one would go about testing this. Romero, Konno & Hasegawa describe how they did it in their study, “Familiarity bias and physiological responses in contagious yawning by dogs support link to empathy” in PLoS ONE,  2013. The authors did so by having 25 dogs sit beside a yawning human. In one case it was their owner, in another, an unfamiliar person. They also tested dog’s responses to “fake yawns,” in which a person opened their mouth without the usual dramatic air exchange that is part of a real yawn. The dog’s heart rate was monitored remotely, and there was no increase or significant change of heart rate found. (I should note, although this is not exactly my wheelhouse, that heart rate itself is not always a good indicator of stress. Heart rate variability, HRV, is believed by many of my colleagues to be a better measure.)

The results found that dogs were about 2 and a half times more likely to yawn after their owner did than a stranger, and much more often than in response to a fake yawn. The authors suggest that the results point to empathy as a motivation for yawning, not stress.

I love getting yet more solid data about the biological miracle that is the relationship between us and our dogs. On a side note, did you see the article about wolf puppies fetching balls to people without any training? Given how highly social wolf puppies are, and how social their play, I’m not surprised but I love that it’s got people thinking more deeply about this amazing bond we have with dogs.

Hmmm. Time to go play with Maggie. But a question for you first: Are you a “contagious yawner?” Your dog? Yawn away, and let us know.

MEANWHILE, back on the farm: Nellie believes that winters are to be spent indoors, and cuddling with Maggie is a good way to do it. Maggie actually was sound asleep until I approached with the camera, that baleful look is to me no doubt, not Nellie.  The light was horrible, but Nellie’s blissful face makes me smile. 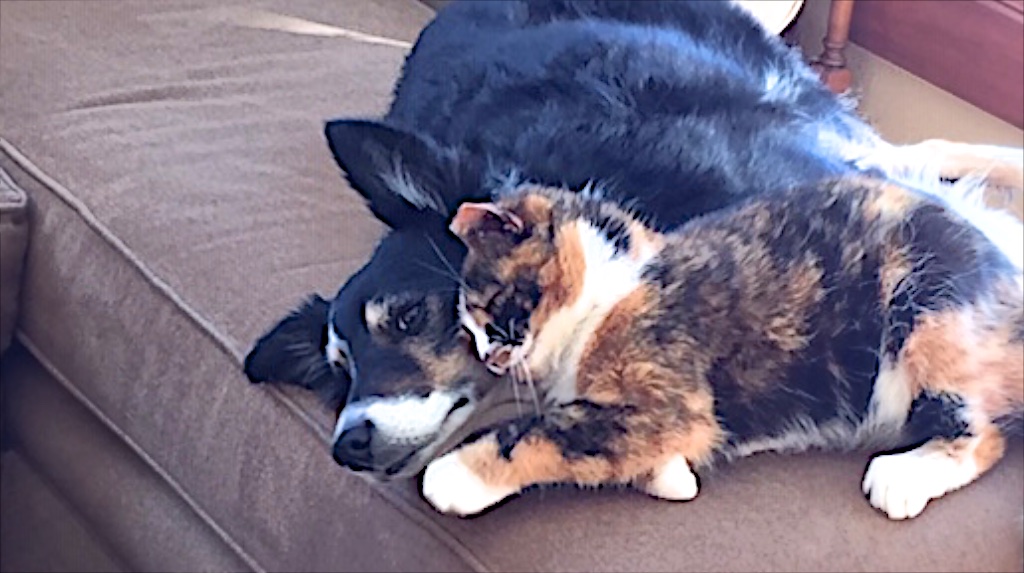 My apologies, I am obsessed with the colors from my tiny, tulip garden from White Flower Farm. This time of year I am a bit insane for color, and soak it up like a thirsty sponge. 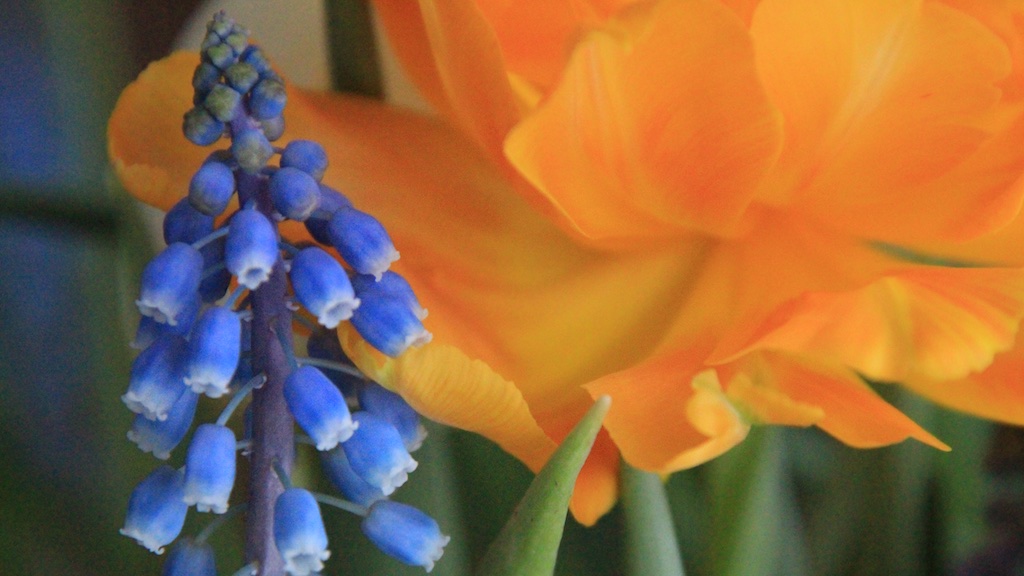 May your week be full of color in all kinds of ways.