Welcome to an ongoing inquiry about the behavior of people and dogs.
Blog Home >> Dog Behavior >> The Puppy Chronicles: Chapter 2

I took him back. It was one of the  hardest decisions I’ve ever made, because I adored so much about him (see last post). Mick, as I named him, is extremely responsive (came EVERY time I called and clapped), very happy to investigate new things, is not sound sensitive, was already fetching, and was starting to play with Will. He is going to be a great dog for some lucky person.T

But the primary reason I got a puppy was for Will. He needs a playmate, and he needs to not have exclusive access to everything in the house, me and Jim included, for too much longer. I need a dog who is going to get along beautifully with Willie, and who, unlike Will, is totally comfortable around unfamiliar dogs. I want a dog who is bomb proof with people and children, a dog who loves other dogs and will be a great friend to Will. Will’s best friends have been small, submissive males, and I wanted either a small, sweet female or small male who loves other dogs and would never bully Will. I also don’t want to get stuck without a good working dog, and my absolute favorite activity with a dog (besides cuddling on the living room floor) is herding sheep. Needless to say, I know that I am asking a lot: a solid disposition, a working dog with great instincts and sheep sense who is strong enough to face down a defensive ewe but biddable enough to listen to me without a battle. Throw in physically sound, great with people and dogs, and oh yeah, Santa Claus, could you also make him cute as can be?

What worried me, nagged me relentlessly, about Mick was that 1) rather than running right up to Will when I brought him home he ran away, looking frightened. In some ways it was good, because he wasn’t all over Willie and didn’t overwhelm him, but the puppies I’ve seen who inherently love other dogs run right up to dogs with a “Oh oh oh! You’re a dog! I’m a dog too!  Hewwwwwwwwwoooooo, can we be friends?” That in itself wouldn’t have been a deal breaker, but add in Mick’s vigorous scratching after defecating and adult-like mounting of Will, and the flags began to fly. I think nothing of puppies mounting each other at this age, it seems relatively common, but this guy looked like an adult stud dog breeding a bitch. He did a complete foreleg clasp (I had to pry his legs off of Will), eyes shut, hard thrusting, tongue flicking. Honestly, at one point I actually thought “Good grief, did he ejaculate?” And this was just  hours after coming to a new place, and to an adult 50 pound male dog.

So what did that portend, really? Oh heck, no one can say for sure, but it raised the odds that this might not be a dog who is totally mellow and bomb-proof around other dogs. And, most importantly, who wouldn’t bully Will when he gets older. Miserably indecisive, I reached out to dear friends–how lucky I am to have some  who are brilliant behaviorists and trainers, and asked what they thought. The responses were consistent: “Well, might be fine, but seeing such adult-like behavior in a 9 week old pup is a bit of a red flag in a dog that young. If you want the odds on your side, you might want to consider taking him back.” (That’s an average of the responses… they varied from BAIL NOW! to “Can’t you wait a week and see?” But most people had the same concerns I did given what I wanted.)

After a lousy night, I bit the bullet, (heart sick, cuz I LOVED so much about this puppy), and asked a dear friend to drive up with me to return him, with the idea that I’d consider another male who also tested well. I was prepared to take that one back or drive back with no puppy at all. This time I took Will with me (the first time I picked out a pup I thought I wouldn’t be able to tell much from Will’s reaction. He’s had so little experience with puppies and I wanted to ease him into it).  I let out the other male of interest, and this time let him meet Willie.  Will did a full piloerection, hair straight up half way down his back. No growl, but tense body. The pup however, looked very comfortable, which I loved. I was primarily focused on the pup, less on Will because I assumed Will would be a bit nervous, so I was happy with that response on the part of the pup. Then I brought out a sweet little female who I had discounted because she was a bit shy. Same response to me this time, too fearful to even come over to me, so I put her right back. I think she’ll be just fine, but not the best pick for someone whose dogs go everywhere. There was one other male there who I had quickly discounted when I did the first tests because 1) He was quite soft, so much so that I didn’t do the startle response test because I thought it would be too much for him. He was very sweet, settled instantly when I rolled him over, brought back the paper the 2nd time I threw it, but clearly much more cautious about the world than Mick. And oh yeah, okay, full disclosure: he just didn’t catch my eye. Okay, that’s not honest enough. I just thought he was sort of plain looking. Okay, still fudging the truth here. I said to Jim “That puppy is just too darn ugly to take home.” May I someday be forgiven.

You know what is coming next. After deciding to leave without a pup, I walked by the puppy pen one more time and the cautious little male just happened to catch my eye. His ears have started to go up, and his face looked plain but super sweet, so I picked him up and introduced him to Will. The pup ran straight to Will, Will play bowed, and they began to race around the yard together. My heart did that thing in which it seems to double in size in your chest, my eyes got extra wet, and I picked up the pup and drove him home. Decision made.

Thanks Will, I needed that. Nothing like a dog to know about another one, hey? Here he is, getting cuter to me by the minute. He is indeed a bit cautious of the world, more sound sensitive than I like, but he adores people, runs right up to them, recovers well from his fears. So far (all 15 hours worth of time!) he seems like a pup who could come out just wonderfully with the right start.  I’ll write more next time about the correlation between the tests and the pup’s behavior at home, but the pup (no name yet) is sleeping now, and I’ve got to grab the time to get other work done! And I’ll also add in the same caution that I tell all puppy buyers: You simply CAN NOT know what you have until they are much much older…. so we’ll see what we’ve got when he’s a year or so. I am clear that this dog is literally auditioning for a job. (Are you listening, the emotional center of Trisha’s brain? Your frontal cortex is talking!)

But for now, here he is, my new, sweet-sweet little boy. Pretty is and as pretty does, and I’ve decided he is slam-dunk adorable. 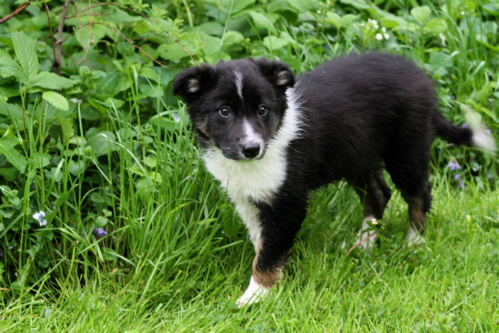 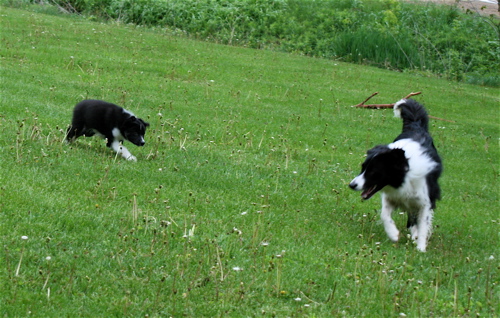 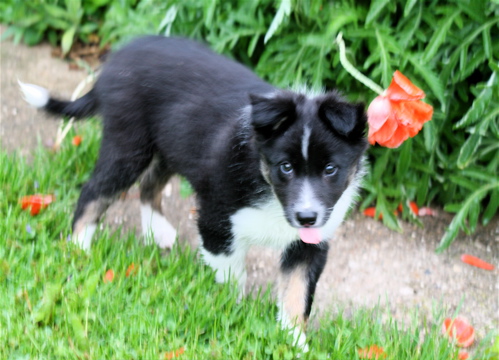