Welcome to an ongoing inquiry about the behavior of people and dogs.
Blog Home >> Animals >> Personality versus Temperament; Poor Spot

Here’s some more information from IFAAB, based on a talk presented by Dr. Samuel Gosling at UT-Austin. He is studying personality in animals, and has looked at it in species as varied as hyenas and dumpling squid. (And yes, dumpling squid are just as cute as they sound).

He spoke briefly about the history of scientific attitudes toward personality in animals–at one point it was almost a dirty word, but in the last twenty years the term (and the concept) has become generally accepted.  (Although he mentioned one researcher who still uses the term “behavioral syndrome” to avoid sounding anthropomorphic.) I must admit, as a someone trained in science myself, I still find it remarkable that the concept of personality in animals was ever controversial. It is astounding how essential it is to many to keep the division between human and animal clear and strong.

Related to that, here are two quotes I use in the Introduction to my UW class on Human/Animal Relationships:

“Our culture and our dominant religions have tied human dignity and self-worth to our separation from nature and  distinctiveness from other animals.” Frans de Waal, Ape and the Sushi Master

However, the concept of personality even in people was controversial  to some behaviorists. Encouragingly, Gosling reported that journal articles using the word, both in studies on human and animal behavior have seen a large increase, especially in the last decade. It seems that the pendulum is finally swinging back to a reasonable place, where we can acknowledge that genetics and experience combine to create predictable behavior patterns in individuals, whether they are human, dog, horse or kangaroo.

Here’s an interesting study of Gosling’s that related to how owners view the personality of their dogs. He asked people at a dog park to fill out a questionnaire about their dogs, and then did some simple tests to learn a bit about the personalities of the owners. You guessed it, there was a strong correlation between how people themselves behaved and how they perceived their dogs. Agreeable dogs were more likely to have agreeable owners, neurotic owners more likely to have neurotic dogs, etc. … Hard to say what’s going on here: could be that we owners project our own tendencies onto our dogs, or perhaps we choose dogs with similar characteristics. Or do we and our dogs began to act like one another after being together long enough!?.

Most interestingly, he found that people were consistent in how they rated other people as well… in other words, if they saw a dog as being “agreeable” they tended to rate other people as agreeable as often as not. But he also found the independent observers tended to rate people’s dogs similarly as did the owners, so it is not as though the owners were totally off base….

Meanwhile, back at the farm: Remember the photo of the ewe Spot getting shorn, with her pristine white belly appearing underneath her wool?  Well, that was then and this is now. I didn’t get a photo, but this morning I didn’t recognize a sheep in the pen at first, couldn’t figure out who was the little, brown ewe by the feeder?  Turns out it was Spot, covered in mud, literally from head to tail. The only explanation I can think of is that she was resting lying down and struggled in the mud to get up. Sheep can get in trouble if they lay down with their legs pointing uphill. Based on her complete coat of mud, II suspect tht she struggled a long time before she could get up. I couldn’t see any injuries, and she seemed hungry and not visibly the worse for wear, so I’ll keep an eye on her tonight and hope she’s fine. Poor little thing, she’s quite small and clearly the bottom of the hierarchy, I find I feel a bit protective of her.

Back to sunny Sunday, here’s Willie moving the sheep out of the barn after shearing. (don’t they look spiffy?) 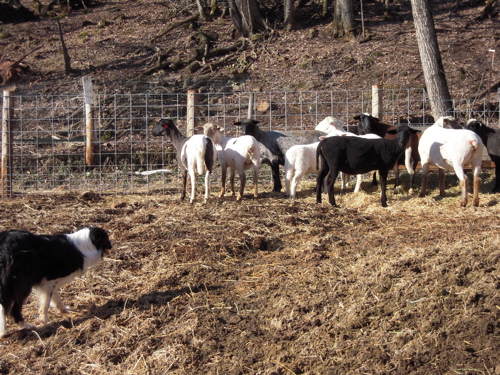 In the next photo you can see the white version of Spot.  She is the one  at the very back.. with the, uh, Spot. Now she’s pretty much all dark brown… 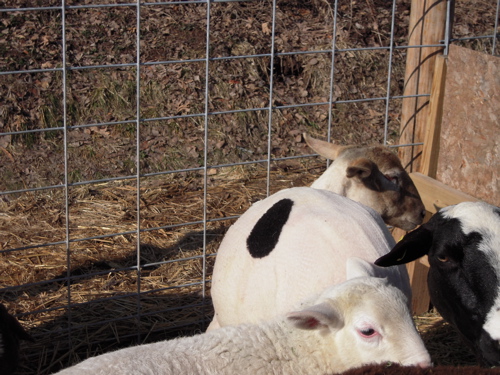 Next is Will, trying to ignore Sushi while waiting to work the sheep…. 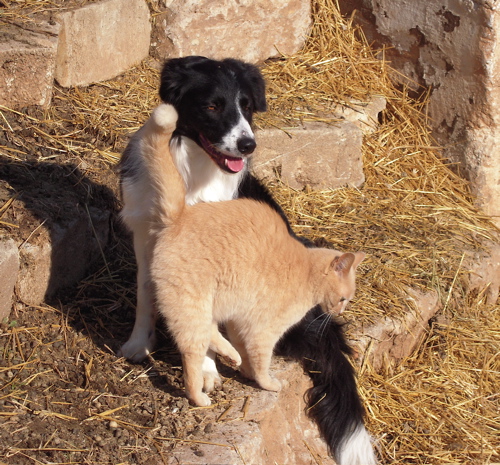