Welcome to an ongoing inquiry about the behavior of people and dogs.
Blog Home >> Animals and the People Who Love Them >> Pets on Zoom: I say More, not Less! 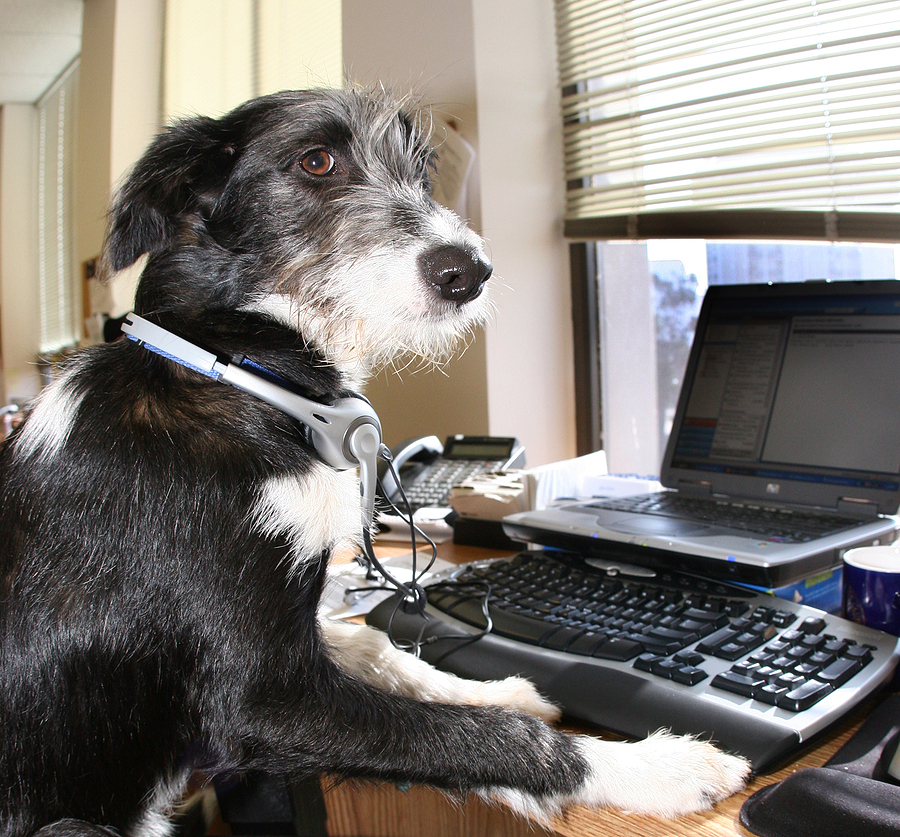 You gotta love our species. (This is my version of “Bless Your Heart.”) Sometimes we can’t stop using our brains too much.

While looking for that viral video of one dog’s barking setting off an entire Zoom screen of other dogs barking (couldn’t find it anywhere… you?), I ran into a controversy on pets joining Zoom meetings. The New York Times ran an article that includes the importance of keeping pets and kids out of Zoom calls. In it they stated “Our families are more important than anyone, but that doesn’t mean our colleagues want to see our partners in their bathrobes, our cats sitting on keyboards or our children throwing toys.” Ah, but we do, we really, really do.

That one seemingly innocuous piece of advice (“keep your pets and kids out of your calls”) backfired big time. So many people jumped in, defending the value of seeing people in their actual real lives, that the NYT back pedaled and said “Our tweet on online video etiquette wasn’t the best and we deleted it. We love your pets and kids. Stay safe.”

I’m the first to admit that barking dogs are not always conducive to getting things done (more on that later in the post) but I absolutely adore seeing people’s family members, two and four legged as part of call. I love seeing news casters’ book cases, art on their walls and cats laser focused, as cats always are, on where our attention is directed. I love it that we actually have REAL reality TV, instead of the pretense that is inherent to studios. Example: Maggie started barking when I was live with Ken Ramirez on his podcast, and we both loved it, cuz it reminded everyone that the dogs of well known trainers bark at the wrong time too, and how we deal with it without getting stressed out.

It also tells us a lot about who people really are, such as this annoyed weather caster whose dog is not making his life any easier.

I can’t resist linking to a complication of seven “pet interrupts video call” site. My favorite, absolute favorite, is the very Revd Dr Robert Willis, Dean of Canterbury, who speaks with such kindness and sincerity as his cat literally gets the cream. (Scroll down in the link a bit for this one.)

Falling down the rabbit hole on a sleepy Sunday afternoon, I found these “conference call fails” (not nec’y pet related but oh so worth it, especially the first one. Just try not laughing out loud.)

And then, of course, the all-time favorite of many of us, Andrew Cotter’s hysterical Zoom meeting with his dogs. His “sports announcing” based on his dogs’ behavior was a highlight for many of us when they first came out. I’ve seen the canine conference call many a time, but it deserves a replay at least once a month until this long, dark winter is over. (It’s also another example of true Reality TV. If I wasn’t married to the most wonderful man in the world, I’d go after Andrew Cotter like a Labrador on a block of cheese. The annoyed sports caster, yeah, not so much.)

I did promise I’d include some advice for the times that you really, really don’t want your dog to mess up your video call. Here’s some good advice from Dr. Karen London.

You? Any funny pet-related conference call video to share? This week seems like the perfect week to indulge in a whole lot of laughter, it being the darkest day of the year.

MEANWHILE, back on the farm: The snow and occasional sun has made life so much nicer than the endless brown of November and early December. However, one bright part of that time was the effort to create a birthday card for a good friend. Her 40th birthday was last week, and her husband asked friends to make cards that somehow celebrated the number 40. Between John Wentz’s sheep, and the photographic skills of Steve Dahlgren, we pulled it off. Here’s the final version of the card: 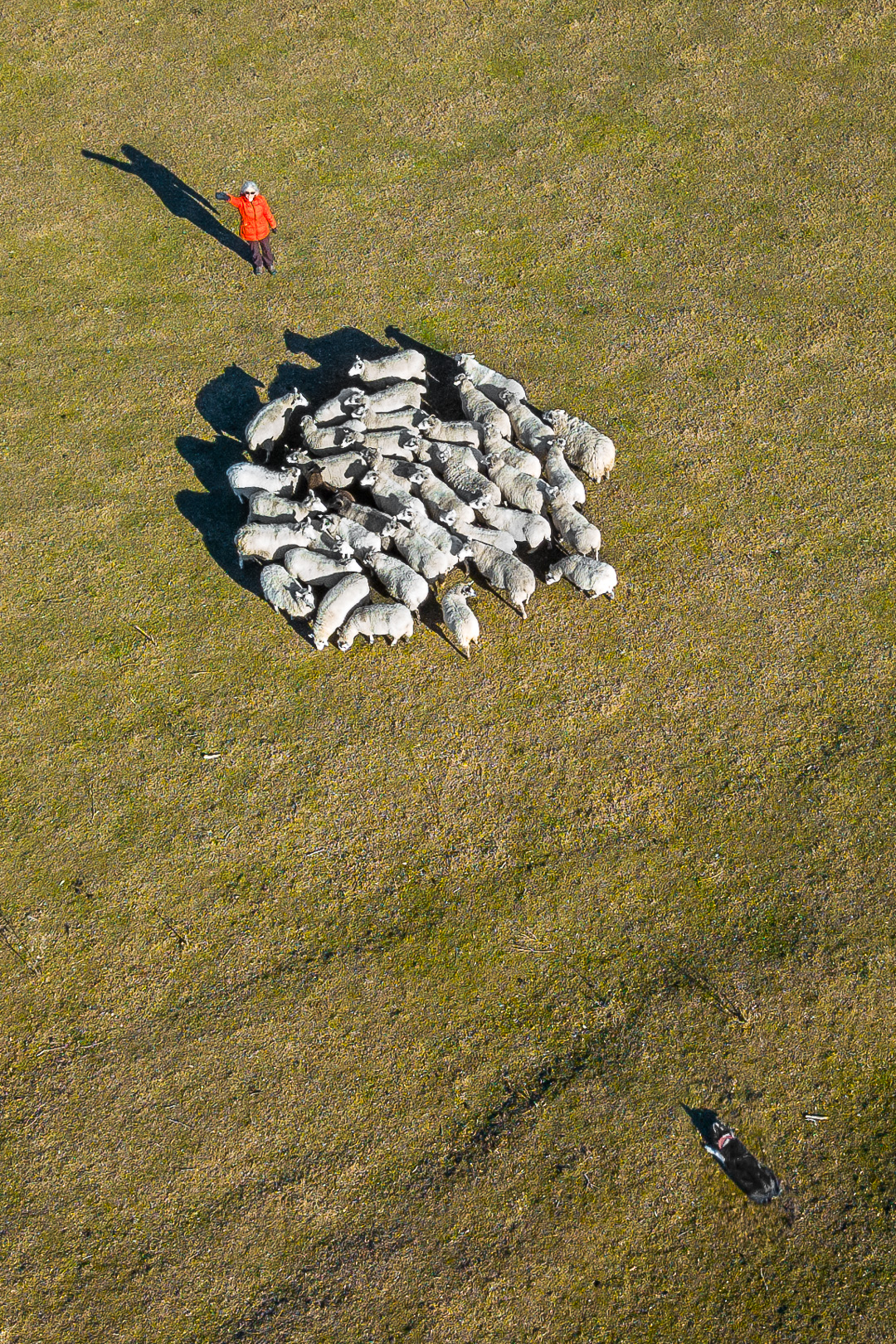 Here’s the video of “the making of the card.” Don’t hesitate to fast forward if you’d like while Maggie and I move the sheep across a long pasture to the sorting chutes. Watch the guard dog make Maggie’s life more difficult when moving the sheep into the pens. (I knew she wouldn’t hurt Maggie, but didn’t realize how much she interfered until I watched the video. Good girl Maggie for never giving up. And good guard dog, really, for protecting her girls!)

My favorite part: John’s only job was to count out 40 sheep, not 39, not 41, while Maggie and I pushed them into the sorting chute. But, as it turns out, the number of sheep coming out of the pens is 41, not 40. (This discovered long after the fact.) As we were moving the sheep into a good area for a drone still photo, one ewe broke off and dashed back to the pens. Maggie gathered up the group, moved them to the single, (never try to move a single ewe–a lone sheep knows exactly what the odds are of being the one in trouble), gathered them back together and got the shot. Apparently that one ewe could count, and was trying to fix it for us. Foolish humans didn’t listen.

But now I have an even better story about the Making of the Card, the recipient loved the story as much as the card, we had great fun doing it, and I have teasing rights for the rest of my life on John. Win win win win. Can’t beat that.

What about you? A favorite animal-related Zoom call? Or any wins wins this week? We’ll savor them all.

I’ll be on vacation next week, and won’t post a blog, although I will of course love reading your comments. I’ll be taking long walks with the dogs, seeing friends and family, whether in person or on line, and doing jigsaw puzzles. See you next year — may it be a year full of light and love for us all.

« Tell Us Your Stories About Reading, or Missing, Canine Emotional Expressions
What Are You Going to Do With Your One Precious Life? »