Welcome to an ongoing inquiry about the behavior of people and dogs.
Blog Home >> Animals and the People Who Love Them >> Piloerection in Dogs: Scared, or Just Glad to See Me? 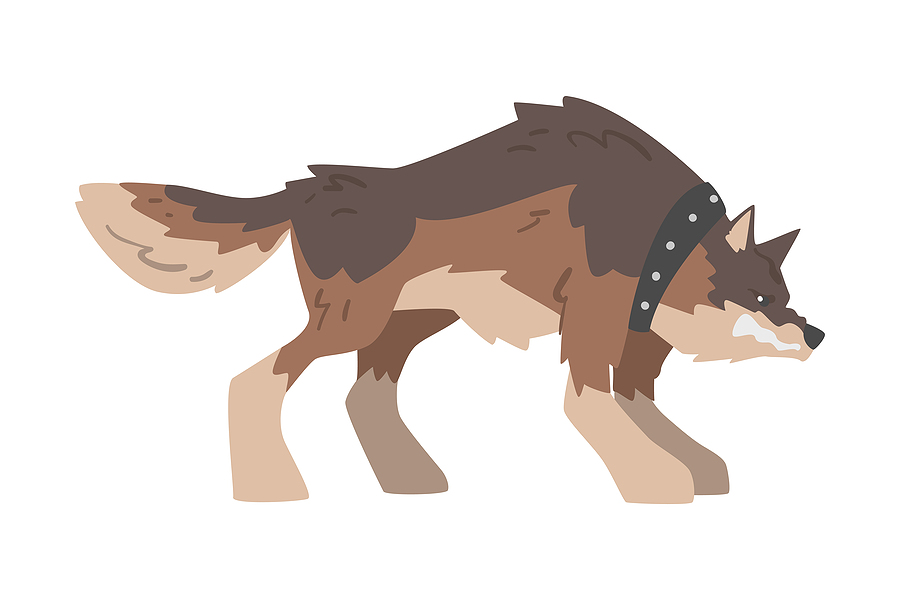 Dr. Karen London, in a reprinted article in Bark Magazine, raised some interesting questions about the meaning of different patterns of raised hackles, or piloerection, in dogs. First off, note that many people associate piloerection with aggression, well illustrated in my search for photos of dogs with raised hackles in a commercial photo site: All 3 illustrations I have in this post were labeled as “angry dogs.” However, piloerection is an indicator of arousal, not potential aggression. There are a lot of emotional states that can correlate with arousal, including fear, excitement and surprise, and some of those might lead to aggression, but not necessarily.

Raised hackles, or piloerection (goose bumps in people!), are common in mammals, and are caused by a contraction of the muscles that sit at the base of each strand of hair. It’s an involuntary response of the sympathetic nervous system (which excites, while parasympathetic calms), and a good indicator that an animal is on alert and aroused. In dogs, it can act as a kind of “super normal sign stimulus,” (ie, size matters), that can intimidate other dogs by making the one with raised hair look larger.

Dr. London, PhD, CAAB, and the author of one of my favorite books, Treat Everyone Like a Dog, wonders if the pattern of piloerection correlates with different emotional states and/or future behavior. Often, she’s observed, a thin line of erected hair from shoulders to tail correlates with more confident dogs, while a broad patch over the neck and/or shoulders (but no further down) correlates with low confidence. Here’s an example of piloerection in just one area: 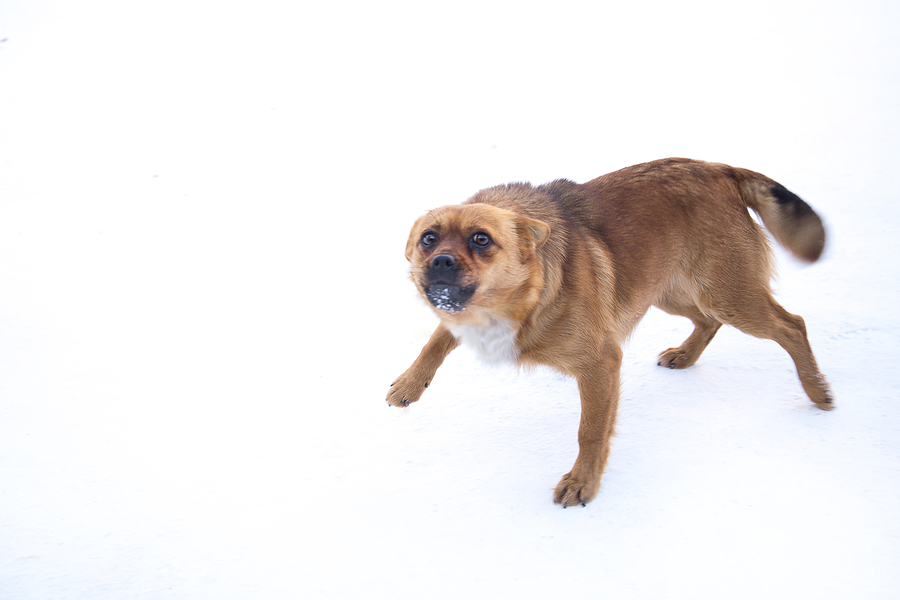 This terrified-looking dog was labeled as “angry” by the photographer or the photo site.  Sigh. Note it’s hackles are raised only over the upper shoulder area.

Raised patches over the shoulders and hips (but not connected), Dr. London speculates, might correlate with dogs who are ambivalent. She finds that these dogs are often more reactive and more unpredictable. Of course, she makes it clear that there is, as always, a lot of individual variation. 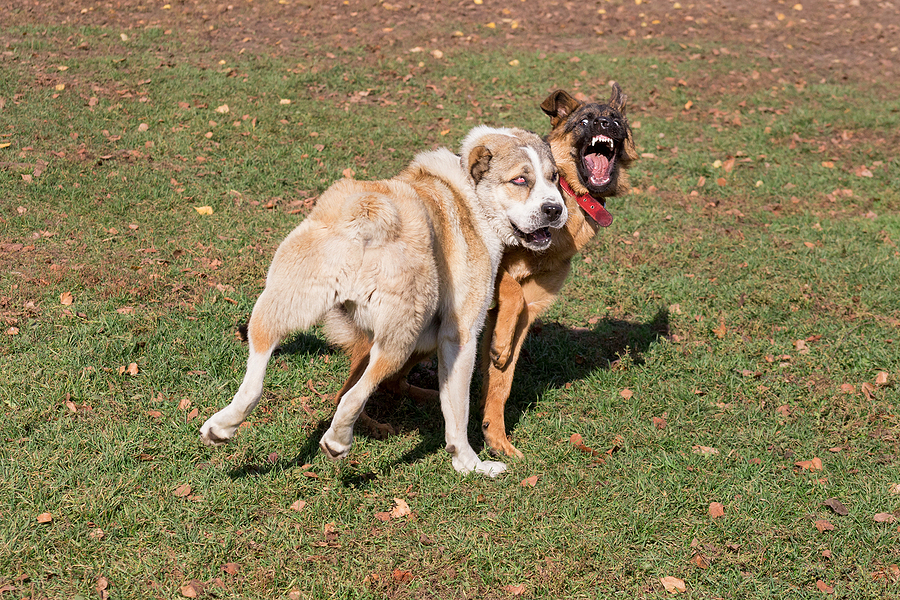 Here’s a video with good illustrations of each pattern from the Western College of Veterinary Medicine, University of Saskachewan:

What we’re lacking, however, is good research. Dr. London’s comments are based on her observations, and she is clear that she’s never seen any definitive research on the topic. I haven’t been able to find solid research either, but perhaps I’ve missed something? If so, let me know. Either way, I’d love to hear about your own observations, and also to motivate us all to pay more attention to the patterns of raised hackles in dogs, especially looking for correlations between piloerection patterns and other visual signals like agonistic puckers versus appeasement “grins,” tail positions, bodies either appeassing, or erect and confident? I can’t wait to hear what you are observing.

MEANWHILE, back on the farm: As I mentioned last week, we had a beautiful weekend at the WWSDA Midwest Championship outside of Hudson, WI. (Hudson is a happening town–don’t miss the Szechuan Green Beans, seriously at Pier 5oo. Seriously.)

Here’s a shot of an exciting run on Monday of David Soppe and Ben, who were only 2 out of 12 teams to manage to complete the International Shed. (Which requires splitting out the red collared sheep from the other 15.) After that, he had just seconds to make the pen, and he did. This guy can read sheep! Congratulations to Gordon Watt, who won the Double Lift Championship as one of the last teams to run. 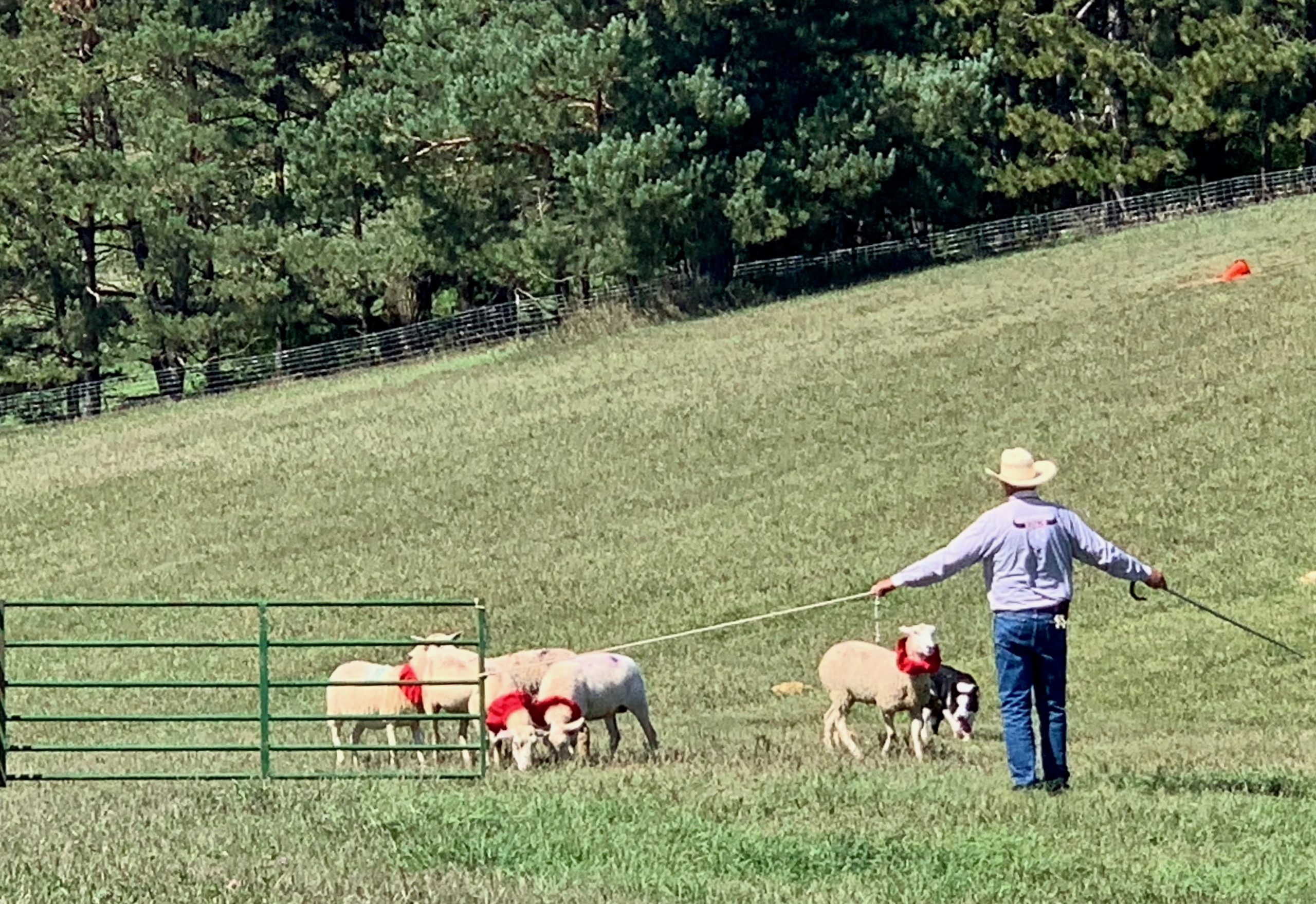 Maggie didn’t run in this trial, I knew the sheep would be too much for her. But she helped immensely when we were charged with picking up the sheep from some of the runs and moving them to their rest area. She loved every minute of it. Here she is overlooking the field, waiting to work. (You might recognize this photo from last week, but I love it so much I’m repeating it.) Look carefully at the background–you can see the handler at the post mid left field, and where the sheep were set out close to where the person (tiny!) is standing at about 12 o’clock on a clock face. This is the same course that Skip and I ran earlier that day. 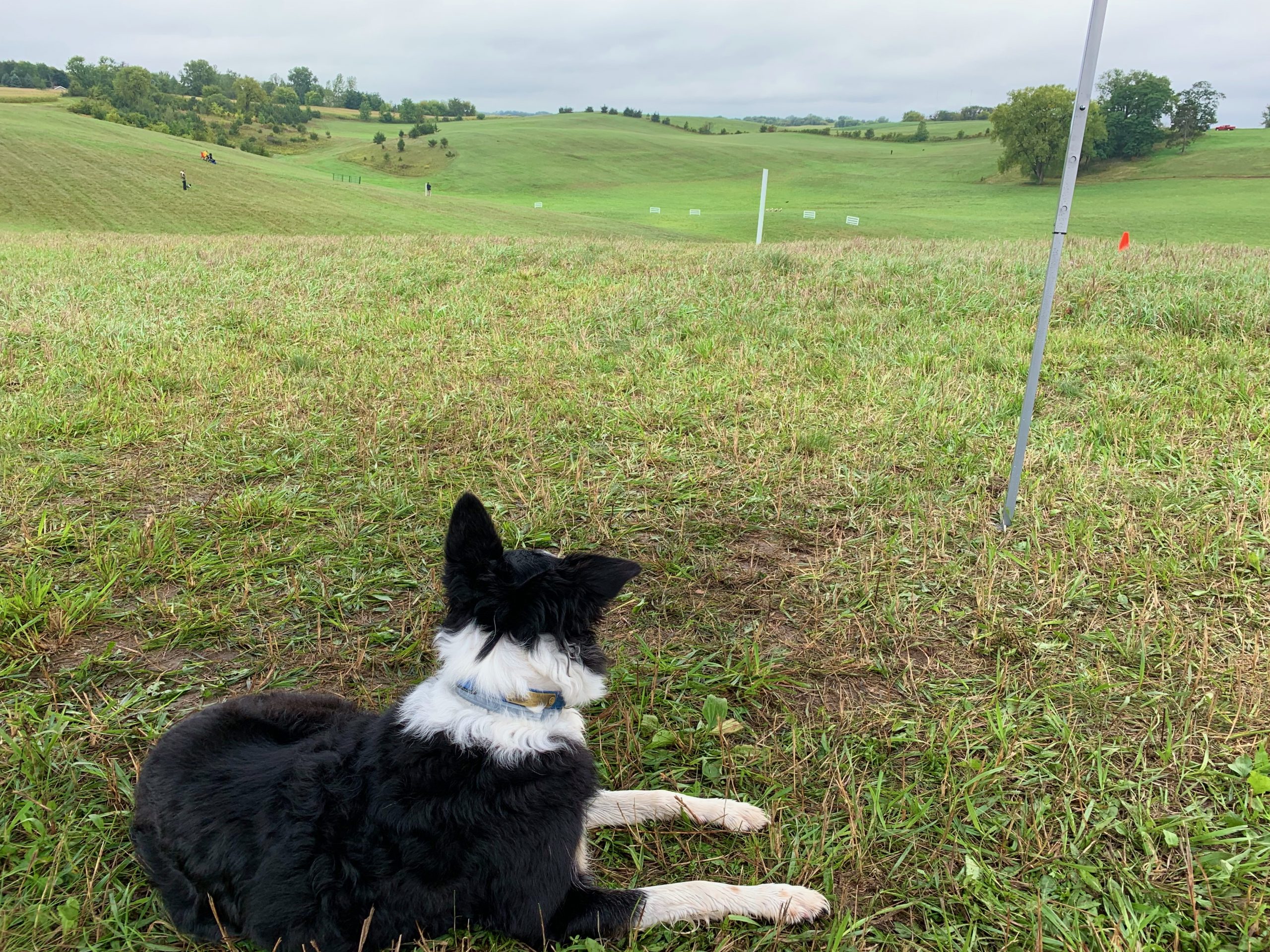 I had Maggie registered for her favorite trial coming up in October, the one she did so well at in May, but it was just cancelled. So, a bittersweet moment for me, because that would have been her last trial. When we entered the Open class, I knew Maggie was going to be challenged perhaps beyond her abilities, but I wanted to see how far we could go, and to get used to picking up sheep so far away you can barely see your dog. She did okay in some trials, floundered (as predicted) when the sheep were “heavy” and needed a lot of push from the dog. She did really well at the trial in May where she got 4th on super flighty sheep, her specialty. Being in the top 10 with her was my goal, so I am happy that we had that experience. I made lots of mistakes, learned a lot and am forever grateful to Maggie for the journey we’ve been on together.

It is so clear to me that she is done. She’s pushing nine years, the age where a lot of dogs say “This isn’t so much fun any more.” Trials are really hard, not just physically but mentally, and Maggie is slowing down, less willing to play rough with Skip, and more and more hesitant on balky sheep. I promised her we’d quit when she asked. She has, and I will honor that. I always knew that she wasn’t a great candidate to run in the Open (or Advanced class), but she was the dog I had, and I wanted to see how much we could learn together.

That leaves Skip as trial dog. He had a horrible first run at this trial, couldn’t move the sheep at all. I was a tad upset (okay, gutted), because he seems to be a much more inherently talented dog than Maggie on tough sheep, and here he was unable to move them. Wiser heads prevailed, in the form of more experienced friends, who promised me that Skip just simply had no idea how to handle sheep like that (they were REALLY difficult–there’s a reason it’s called The Championship), and he’d be better the next time. Whew. He was. I had to grump at him when he flipped around and tried to bring the sheep back to me as we started the drive, and I could have handled the cross drive better (it was tricky!), so we used up too much time and didn’t finish the drive and thus didn’t get any drive points. But he took charge of the sheep, faced one off without losing his cool, taught one to stop trying to break off, listened well with one exception, and I didn’t do anything ridiculously stupid. Good on us. I was also reminded that he’s only 4, which might seem mature, but he’s only been in 5 trials with me, so we are both gaining experience together. Dogs don’t usually come into their own until they are older and more experienced, so we have lots of time.

Here’s our run (you might want to mute, lots of chatting beside Jim as he taped):

That’s it for this week, it’s been a busy week for me. Please pay a lot of attention to patterns of piloerection and tell us your observations. I’m obsessed with this now, and hope you too will pay a lot more attention in the future!

« No Work on Labor Day
Stunned. Does It Happen to Dogs Too? »