Welcome to an ongoing inquiry about the behavior of people and dogs.
Blog Home >> Dog Behavior >> Play and Self Handicapping

Apologies for not writing sooner, but I’ve just come out of one of those “work tunnels” that we all experience from time to time.  What a joy to have come up for air and work Willie on sheep, rub Lassie’s creamy soft belly and go on a bike ride with Jim.

But, there’s so much to tell you about the Association of Pet Dog Trainers Conference last week in Kentucky.  I was only able to attend for two days, because I had to get back to give another speech on Sunday. I know I missed some great talks the last days at APDT, but I want to tell you about some of the great information that was presented at the Symposium on Play on Thursday. An entire day was devoted to the topic of play, and it was a joy to be able to go into a topic in depth.

(Truth in Lending: I’m not objective about this at all. I suggested the idea of a day-long symposium on play to APDT, after attending the Ph.D. defense of Camille Ward in Ann Arbor, Michigan last summer. She did her research, under the mentorship of Dr. Barbara Smuts, on play in domestic dog pups. I was on her committee, and was so inspired by her research that I starting thinking about what a huge topic play is, and how it deserved an entire day at a conference.  The folks at APDT (thanks Ian and Marion!) liked the idea and off we went designing a day of speakers…

So, I’ll give you a summary of each of the talks for the next couple of days, beginning with a few points from my Introduction to the Symposium, if you’ll bear with me. Tomorrow I’ll tell you about Camille’s research findings, and later about Pia Silvani and Karen London’s excellent talks. Ian Dunbar wrapped it all up in a bow at the end of the day, although he owes me big time (I’ll tell you why a little later on in the week. Stay tuned.)

Today I thought I’d mention one of the points I made early in the day, which is that one of the most important aspects of healthy play is that the stronger, faster individual self handcaps, or inhibits their speed and strength to match that of their partner. We humans, at least if we are polite ones, do this as a matter of course. What would you think of a mother who smashed a serve toward her seven-year old child who was just learning to play tennis, or a father who used all his strength when play-wrestling with his five year old?

Dogs do it too, as was illustrated in videos I showed of Lassie and Willie playing tug.  The first video was when Will was about 9 weeks old, and 12 year old Lassie not only plays tug with clear inhibition (she pulls back with less strength than she had, she shook her head from side to side with much less torque and speed than usual), but she moved the tug toy back toward Will’s mouth the few times she pulled it out of his mouth. The next video showed Will and Lassie playing tug just a few months ago. Will is two years old now, and so strong and fast I get a great workout playing tug with him myself. This time, at fourteen, Lassie is the weaker one. And yet, there’s Will, carefully pulling just hard enough to keep Lassie engaged in the game. He rarely shakes his head from side to side, and  he pulls just hard enough to make it a game,  even though he could rip it out of Lassie’s mouth in a micro second. It’s a lovely example of self handicapping (and why it makes me feel a little bit sentimental, I can’t say. There’s something so endearing about it….).

But here’s the challenge: self handicapping requires a lot of emotional control, and the irony about play is that part of its fun is that we can throw aside some of our inhibitions and lose a little bit of control. I suspect this is where a lot of dogs get into trouble. Playing, which often involves the same actions as fighting, can result in high arousal and a lack of inhibition… and spill over into aggression a bit too easily.  “I went to a fight and a hockey game broke out” applies to dogs as well as people. Dogs need to learn to self regulate as they grow up, and I think we can  help them by teaching them games that involve learning patience and emotional control. For example, Will has learned to stay in a down-stay while I throw the ball for Lassie a few times, that’s just part of the game. He’s learned that being patient and polite leads to more play for him, and so is used to getting reved up, but calming himself down at a moment’s notice when asked.

I’m also a believer that it is good to interrupt dog play when it becomes a bit too energetic, especially when dogs are young, and especially when they don’t live together. There’s nothing wrong with helping dogs to learn to calm themselves, just as we do young children. (One of the tapes I played at the conference included the voices of a child and parent watching prairie dogs at the zoo. The adult’s voice, even when excited, stayed measured, but the child’s voice was a prime example of ’emotional arousal.’ It was adorable really… “AH! There are NINE!!!!!! prairie dogs” the child shrieked when yet one more prairie dog came out of the burrow. His voice was so excited you could feel the arousal, and catch some of it yourself. After the child literally shrieked “NINE” at the top of his lungs, his good parents quietly said “Shhhhh..,” teaching the child to monitor his arousal level in certain situations. I think we owe the same to dogs, without being too protective or hovering over them.

I like what Pia Silvani and trainers at St. Hubert’s Animal Welfare Center do in puppy class: if it looks as if one puppy is getting out of control or starting to bully another, they calmly and gently take the potential offender by the collar and separate the pups. If the other one comes back for more, then it’s great to let them begin playing again.  If not, then it’s time to end the play session between those two pups. As we all know… it’s only really play if both participants are enjoying themselves.

Here’s a lovely play bow for you, sent to me by a super photographer… 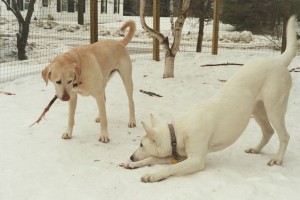