Welcome to an ongoing inquiry about the behavior of people and dogs.
Blog Home >> Dog Behavior >> Play Between Domestic Dogs

Pia Silvani’s, Director of Behavior and Training at St. Hubert’s Animal Welfare Center in New Jersey, gave a talk at APDT that focused on play between adult dogs, and it was a fantastic presentation. The best part of the talk was her videos of dogs playing–both appropriately and inappropriately. My absolute favorite was a video of two Tervurens meeting, greeting and eventually playing together beautifully. It was a like watching two strangers meet each other, and end up dancing as if they were on Dancing with the Stars. Several things stood out in the video that are, I think, important aspects of healthy dog play.

First of all, the dogs were able to meet each other one on one, without other dogs around. So often it seems that dogs get introduced into a ‘pack’ and are overwhelmed by 3 or 5 or 7 other dogs all trying to get access to them at the same time.

Secondly, the dogs weren’t forced into anything; they were able to approach and withdraw often, which is another way that dogs can avoid too much pressure during a greeting. This reminds me of the Ph.D. research of Dr. Anneke Lisberg from the University of Wisconsin, who did some of the first real research ever done on scent marking in domestic dogs (familiarity breeds contempt in science too!). She found that dogs entering a dog park were most likely to be the ones urinating after a greeting ritual with the resident dogs, and that the “newbee” often ended a close encounter by trotting a few feet away and urinating. Dr. Lisberg speculates that the entering dogs can avoid tension during greetings by walking away from close contact w/ other dogs and urinating a few feet away. It would be as if the dogs were providing information about themselves in their urine, on the ground, to avoid all those noses stuck up under their tails. Interesting, isn’t it? This makes me think about indoor day care facilities, where dogs are inhibited from urinating… I wonder if that causes problems? It does seem, on reflection, that all dogs should be able to meet and greet outside where they can use urine to communicate.

Thirdly, the Terv’s in Pia’s talk began to play with lots of play bows and ‘stop/starts,’ done with a good distance between them. Gradually, as their play continued, they began to play closer and closer to each other, and finally began to make contact only after several minutes of mutual play. It really was one of the loveliest examples I’ve seen of two dogs reading one another and politely beginning a relationship.

Contrast that with the video she showed of a poor (Boston?) little dog being tossed into the mosh pit of a busy day care. The dog was literally swamped by 5 or 6 (I’m guessing here) other dogs who overwhelmed it, ran after it, surrounded it and basically terrified the poor thing, giving it no chance to get a breath much less manage to be appropriately greeted. Thank heavens, there are many, many day care facilities who are very careful when they introduce new dogs, starting with a one-on-one session with a known “good greeter” and then gradually introducing them to the entire group… would that they all did this, yes?

I’d be curious about your experiences with your dog, both while greeting and playing with unfamiliar dogs. My Willie, aka “I-came-with-so-many-issues-Trisha-called-me-the-Spawn-of-Satan once,” plays beautifully with other dogs IF I manage the introduction so that he doesn’t get overwhelmed. First impressions matter with dogs too, don’t they?!

Here’s Pia mugging with a statue in Louisvile: 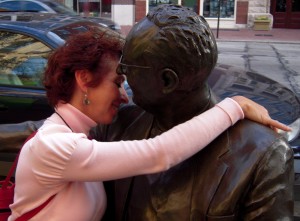 Speaking of great play between dogs, I recently visited some dear friends who I met through our mutual love of Great Pyrenees. Here are 2 photos of Czar, Tundra and Osa the Newfie playing as beautifully as dogs can play. What a joy it was to watch them! 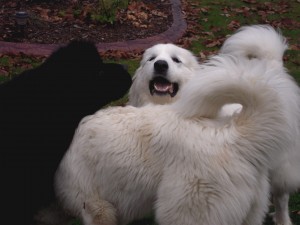 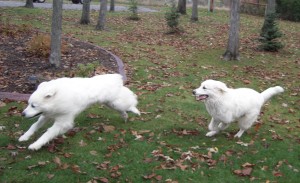 And here’s yet another view of fall at the farm. Sorry, I just can’t stop myself. 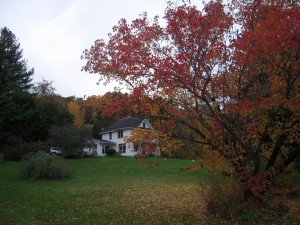