Welcome to an ongoing inquiry about the behavior of people and dogs.
Blog Home >> Dog Training >> Positive Reinforcement is Defined by the Receiver!

Home. Ummmm, feels so good. Even though the trip was wonderful in so many ways, it is SO good to be home. As I wrote earlier, I greatly enjoyed presenting a seminar in Sweden—the people were so kind and interesting, and our vacation in the fjord country of Norway was heavenly. (see the photos attached). And yet… Dorothy was right. There’s no place like home.

And yet, as much as I love to travel, it’s so hard to leave my dogs. I think that’s especially true now that Lassie is so old, but maybe not. I just hate leaving them, period. We had some of the world’s finest house sitters (thank you Jim and Sheryl!) so it wasn’t so much that I was worried about the dogs, but it was just so hard to leave them. Okay, so I was worried. Just a little.

There’s a lesson here for all of us interested in training dogs. My quandry over enjoying travel and wanting to be home is a perfect example of how “positive reinforcement” is defined by the receiver. If you told me I could have an all-expense paid trip to Spain or Paris two weeks from now I’d turn it down. Right now all I want to do is to be home on the farm, with Lassie, Willie, and Sushi the cat. I want to watch the sheep eat apples from our wild apple trees, and savor and process the bounty of local, organic produce from the CSA down the road. As much as I enjoyed the trip, more travel right now would be punishment, not positive reinforcement.

What a good reminder that “positive reinforcement” is always, by definition, decided by the receiver, not by the ‘giver.’ This is easy to forget, especially for novice trainers, and so it deserves discussion in any dog training class or private session. For example, the owner may feel good praising and petting their dog if he came when called away from a play session, but it might be the last thing the dog wanted at that moment. (Getting petted while cuddling on the couch is a far cry from getting pets in the middle of romping at the dog park with one’s buddies. Do you want your sweetie to rub your neck when you’re in the middle of a tennis match?) At seminars sometimes I’ll praise and pet a dog for giving up a toy, and ask the audience to grade my “reinforcement.” If I sound happy and exuberant, I’ll get straight “A’s” from the crowd. But then, I’ll ask them to watch the dog’s face and praise as pet as before. This time they’ll notice, that while I was happy-talking up a storm, the dog turned his head away from the petting (I was doing on the top of his head in that pat-pat kind of way that most dogs don’t like) and didn’t look happy at all. I may have sounded good, but I was actually punishing the dog, not reinforcing him. Food for thought.

Meanwhile, here’s some of the reinforcing part of of travel… staying in the astoundingly beautiful village of Flam, Norway. 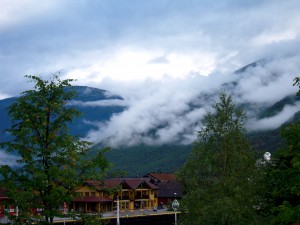 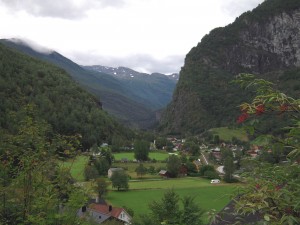