Welcome to an ongoing inquiry about the behavior of people and dogs.
Blog Home >> Animals and the People Who Love Them >> Positive Reinforcement is Defined by the Receiver, Take Two

I’ve been thinking a lot lately about how important it is to remember that “reinforcement” and “punishment” are defined by the receiver. I’m not sure what got me thinking about it. Perhaps it was learning about a study that found cows perceived being yelled at as distressing as being shocked with an electric prod. Or perhaps it was realizing that Willie most likely doesn’t enjoy practicing penning the sheep anymore (the most pressure-filled part of a sheepdog competition) because he doesn’t like the pressure. (Thank you friend Donna for making the suggestion.) Or maybe it was while explaining to friends that getting a free trip to anywhere right now wouldn’t be reinforcement, it would be punishment. This is not the first time I’ve broached this subject.

Here’s what I wrote in 2008 about it: If you told me I could have an all-expense paid trip to Spain or Paris two weeks from now I’d turn it down. Right now all I want to do is to be home on the farm, with Lassie, Willie, and Sushi the cat. I want to watch the sheep eat apples from our wild apple trees, and savor and process the bounty of local, organic produce from the CSA down the road. As much as I enjoyed the trip, more travel right now would be punishment, not positive reinforcement.

What a good reminder that “positive reinforcement” is always, by definition, decided by the receiver, not by the ‘giver.’ This is easy to forget, especially for novice trainers, and so it deserves discussion in any dog training class or private session. For example, the owner may feel good praising and petting their dog if he came when called away from a play session, but it might be the last thing the dog wanted at that moment. (Getting petted while cuddling on the couch is a far cry from getting pets in the middle of romping at the dog park with one’s buddies. Do you want your sweetie to rub your neck when you’re in the middle of a tennis match?) At seminars sometimes I’ll praise and pet a dog for giving up a toy, and ask the audience to grade my “reinforcement.” If I sound happy and exuberant, I’ll get straight “A’s” from the crowd. But then, I’ll ask them to watch the dog’s face and praise as pet as before. This time they’ll notice, that while I was happy-talking up a storm, the dog turned his head away from the petting (I was doing on the top of his head in that pat-pat kind of way that most dogs don’t like) and didn’t look happy at all. I may have sounded good, but I was actually punishing the dog, not reinforcing him. Food for thought.

I think this concept is important for all dog lovers to revisit on a regular basis. The fact is, it is hard to take yourself out of your own reality; we all need frequent reminders that our assumptions about what is reinforcing and and what is punishing are not always accurate. Who knew that cows would find a raised voice as aversive as an electric shock? How many dog owners try to stop a dog from jumping up on them by pushing the dog away with their hands? (And the dog responds by jumping with even more enthusiasm, because moving one’s paw toward another dog is a play signal. Thus, what the owners perceive as punishment acts as a reinforcer to the dog.) I can’t tell how often I see people attempt to reinforce their dogs with something the dog doesn’t want–whether it’s offering a dog a treat when he is too engaged at barking at the window to have any interest in food, or petting a dog on top of the head with no awareness that the dog’s response is to move away.

Although most of us know the more obvious examples of miscommunication between person and dog about what is, and is not, reinforcing or punishing (remember I am using ‘punishment’ to mean ‘anything that decrease the frequency of a response), we all profit by reminding ourselves to drop our assumptions and let the dog’s behavior tell us what is a “P” and what is an “R” to our dogs. I’d love to hear your examples of times when you realized that you and your dog were defining things differently.

MEANWHILE, back on the farm in 2015: Here’s a photo of  two lambs on the farm we visited in Georgia. They are here to remind me what lambs look like, because my ewes are so overdue I am at risk of forgetting. Perhaps they have forgotten too? In their defense, they were first exposed to the ram King Charles, who turned out to be very ill, and subsequent died soon after mating with Lady Baa Baa. That mating clearly didn’t take, because she is long overdue if it had. After the untimely death of King Charles, Little Big Man swaggered into the picture, with a lot to learn about courtship. No flowers and dinner out for him, and the ewes were not impressed. Cupcake ran away from him, and Lady Baa Baa’s mother, Lady Godiva, damn near tried to kill him for the first 4 days. I had to keep them separated, with brief dates during the day in which Lady G would lower her head and smash Little Big Man into a post. Eventually, everyone settled down. And hopefully, the girls got bred. Cross your hooves, we have usually lambed by now, or at least started, and I’m starting to pace the floor.

But I digress… I ask you: Is there anything cuter than a newborn lamb? 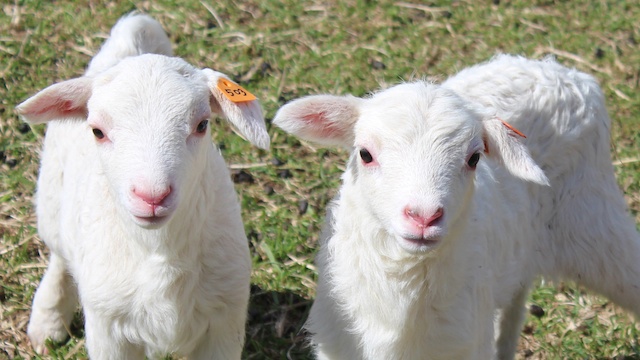 We do have spring flowers, lots of them. As well as perfect spring weather, nodding daffodils and Phoebee’s, Chipping Sparrows, Chickadees, Cardinals and Bluebirds chorusing in the background. It’s good to have a reminder of why we live through our ridiculously long and brutal winters! 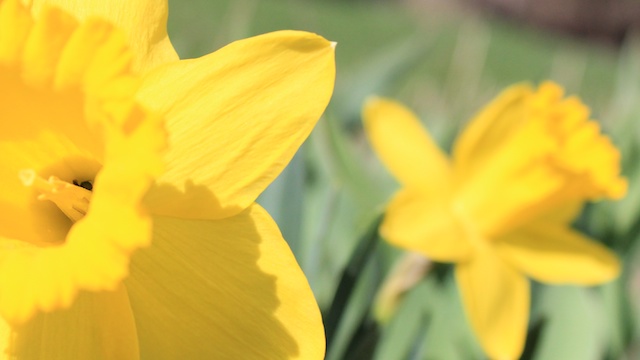 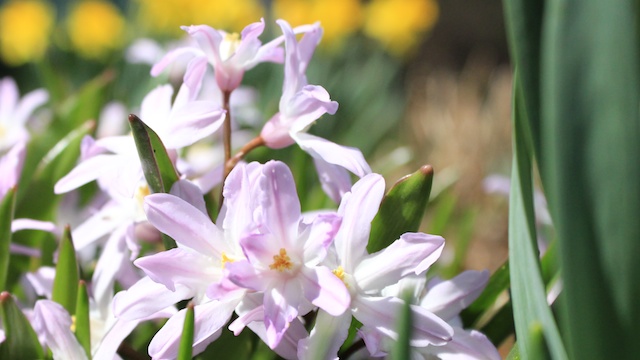