Welcome to an ongoing inquiry about the behavior of people and dogs.
Blog Home >> Dog Books >> Pukka’s Promise: Book Review

Most of the books are somewhat interesting, a few of them are downright, uh, horrible.  And every once in a while a truly great one comes along, that sucks you in and causes you to change your schedule and read, read, read until the last page is turned and the book closes and you are mad at yourself for staying up so damn late.

That describes Ted Kerasote’s new book, Pukka’s Promise: The Quest for Long-Lived Dogs. I fell in love with his writing in Merle’s Door, and Pukka’s Promise contains the same clear and luminous stories, but this time about his new pup, Pukka. But it is much more than a book about a dog. He begins by telling us about Merle’s last days, and describes greeting a couple’s new chocolate Lab pup: “His breath smelled like milk and vanilla and young teeth. I made a smooching noise with my lips; he squirmed in delight. ‘Oh, you are a beauty,’ I told him, kissing his head . . .  and as I watched them [the pup and the couple] go I thought ‘In fourteen years, perhaps sooner, certainly not much longer, he’ll break your heart. Your entire life from now until then will be colored by him: his woofs, his wags, his smells, how he swam, his yips while he dreamed, how he rode your first child on his back, and how he began to slow down just as you were hitting your stride.’ I looked back at Merle, grinning at me from the truck. Like everyone’s dog, he had been all that and more, and I thought: ‘Why do they have to die so young?”

That’s why Ted wrote this book, and that’s what this book is about: The Quest for Longer-Lived Dogs. It is a book whose topic is long overdue. I met Ted when he came to Madison on book tour for Merle’s door, and over coffee he asked if I thought it was a reasonable topic for a book, having been struck so often when talking about Merle how short our dog’s lives are, and how painful their deaths. “Oh yes yes yes” I said, as I’m sure did many others. How often have we said “If only they lived longer….”?

I’ll talk later about some of the details in the book because they deserve their own posts: Does spaying and neutering help or hinder a dog’s longevity–what does the research say? Are dogs more susceptible to cancers than adult humans, and if so, why, and what to do about it? What really goes on inside a dog food production facility? Kerasote spent a good five years tracking down the answers to questions about diet, environmental health, genetics and medicine with a relentless obsessiveness that would put a Border Collie to shame. This is a guy with some serious stamina: wait until you read what he goes through to find his next dog.

As in Merle’s Door, Ted writes, without apology, as if he always aware of the inner most thoughts of his dogs. I have some problems with that, but not enough to keep me from loving the book. Ted makes some training choices that some won’t agree with, but his honesty is refreshing, and makes the book even stronger. A warning: Most of us will never be able to do all the things that Ted is doing to keep Pukka healthy (there are no elk in my backyard, and I wouldn’t know how to kill one for Willie if our lives depended on it). But there is a much here for all dog lovers. Maybe, just maybe, each of our dogs can live a little bit longer because of what we are learning about canine longevity. I liked the book so much you can order it off of our website. I can’t wait to hear what you think.

[Spoiler alert: I spent most of the weekend holed up with a bad cold and another pre-pub book, Susannah Charleson’s The Possibility Dogs. (She wrote Scent of the Missing.) The new book is coming out in June, and even though I’ve already read it I can barely wait. Here’s part of the blurb I wrote: “Simply BRILLIANT!”]

MEANWHILE, back on the farm: Well it was ten below zero this morning (that’s Farenheit, or  -23 Celsius). Thank heavens we got a fat layer of snow that plopped down on Wednesday and is insulating the soil, plants and small mammals underneath it. But it’s nippy, very nippy for us around here. It’s all relative, isn’t it? This is average weather for the interior of Alaska and for some readers in colder climes, but chilly for us here in Wisconsin and ridiculously cold for someone in Florida or Columbia.

Tootsie makes it out to pee and poop and then lifts one cold paw and looks at me pathetically. (It’s such an irony that extreme cold feels like a burn on your hands and fingers, isn’t it? The first time I experienced snow I was shocked that it made my hands feel like they were on fire.) Willie is not picking up his paws and seems oblivious (“Let’s play, let’s play some more!!!”), and I get cold long before he seems to, so I don’t know where his limit is.  The kitties seem just fine, they cuddle together in their cozy kitty igloo in the garage and the sheep.. well, that’s what wool is for, right?

The wild birds will be fine IF they have enough food, and we are working hard to keep the feeders full. I’d say we are going through about 4-5 pounds of sunflower seed a day, not to mention a pound or two of suet. Here’s a photo I took the morning after the storm of 2 Chickadees preparing to launch onto the feeders. It’s not an especially good photo of the birds themselves, but I include it here because I love the light in it along with the deep blue sky that often follows our storms . . . 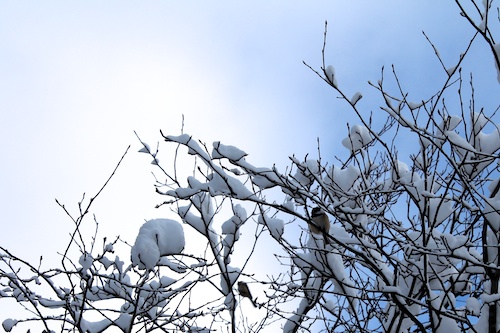 And here is Mr. Willie loving winter play–he gets to do some fetching in winter if the snow is deep because it helps to soften the impact when he chases. (He still loves the old, beat up disc best!) 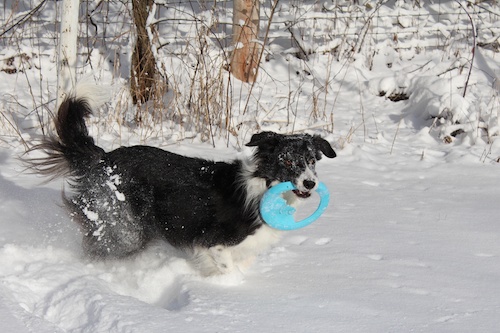 « Dogs & Wolves: Diet and Sociability
How Do You Play with Your Dog? »