Welcome to an ongoing inquiry about the behavior of people and dogs.
Blog Home >> Animals >> Rabbits are like Dogs, but Not

So much to learn, so little time! I recently did a guest appearance on Wisconsin Public Radio and didn’t do a very good job answering a question about a rabbit who pottied on the couch instead of its litter box. Thanks to an alert listener and member of the Wisconsin House Rabbit Society, I’ve learned a lot since. And I have to admit I find it fascinating. You all know I’m an animal behavior addict, whether it’s dogs or donkeys or doodle bugs, and I even had rabbits for a time, so I’m gratified to learn more about them.

I’m not proud of my own efforts at rabbit husbandry. It was a very, very long time ago, before I knew much at all about animals and animal behavior, and the rabbits lived outside in a cage in a building. Granted, it was warm and safe, but one of the most important things I now know about rabbits is that rabbits are like dogs in that they are highly social and inquisitive. Keeping a rabbit in a cage outside with little social interaction  is no life for a rabbit.  (Thank heavens we at least had 2 of them together, and they  got along well.) They need physical and mental exercise just like dogs, and they need relationships with others that are friendly and fun.

On the other hand, rabbits are nothing like dogs. And there’s where I messed up on my radio answer to the rabbit who wasn’t using its litter box. I had cat and dog behavior too much on my mind when I answered, and I didn’t say that rabbits, unlike dogs but exactly like my sheep, potty where they eat. Like dogs, they use urine and feces  to mark territory, but unlike dogs, they take this territory stuff inside the house very, very seriously. So seriously that the national House Rabbit Society (a marvelous resource by the way, as is the Wisconsin chapter) advises you to avoid even putting your hand in their cage. Their cage (with litter box within it) is their territory, and rabbits do better when what’s theirs is theirs and what’s yours is yours.

The House Rabbit Society advises never putting your hand in the rabbit’s cage for any reason if the rabbit is inside. Don’t reach in to pull him or her out (they are prey animals after all), and don’t pick them up and put them back. Herd them back, Border Collie like, so that they make the choice themselves to go inside.

There’s a lesson for all of us here, one I find myself learning over and over again: Every animal has its own ethology, its own umwelt or reality that it lives within, and it is critical for us to understand and respect that. The sheep taught me that the first year I had them, when I spent hours trying to close up and insulate the barn so that they wouldn’t suffer during the brutal Wisconsin winters. . .  and ended up giving them pneumonia because sheep need fresh air to be healthy. I sometimes find them on the coldest of mornings lying in comfortably outside on icy snow, instead of the warm, comfy straw I’ve put in the sheltered barn.

What about you? I’d love to read about what your experiences with any species has taught you. Horses and sheep taught me to think more like a prey animal, my cats have taught me about the need to pause before going outside so that one can look and smell for other cats or danger. What about you: Lessons from gerbils? Here’s what my pet rat taught me?

And oh yeah: One last thing: Rabbit fanciers call rabbit poop “pills.” If that’s not cute I don’t know what is. (I should note that rabbits also have two kinds of poop. Check it out here.)

MEANWHILE, back on the farm: It’s gorgeous and sunny but cool with puffy clouds and blue sky and blooming poppies by the front door. I can’t savor much of it now because it’s crunch time at the University, lots of exams to grade and lots of work too on our new website (coming to a computer near you this summer). Here’s some of what I’m soaking up: 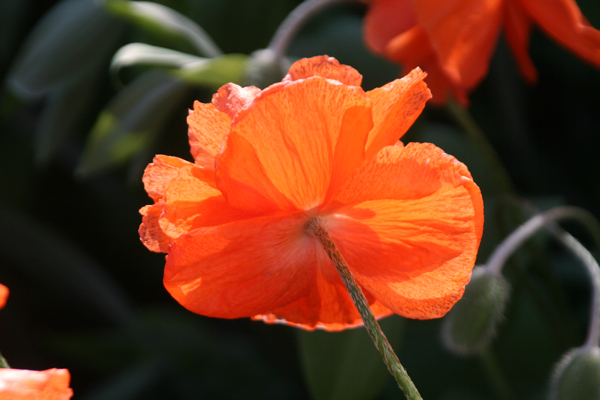