Welcome to an ongoing inquiry about the behavior of people and dogs.
Blog Home >> Animals and the People Who Love Them >> “Recovery Collars” After Surgery–Do They Work? 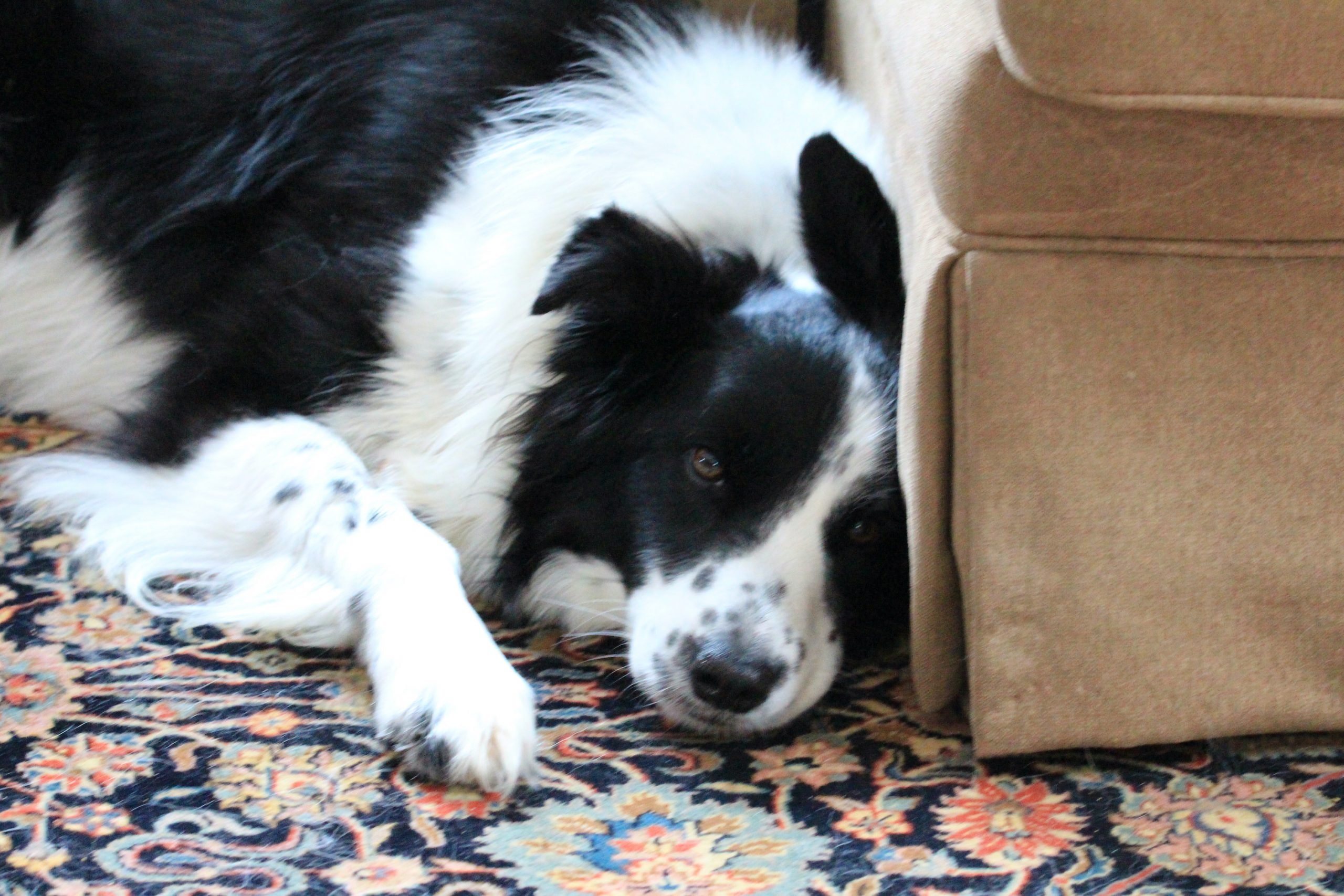 Skip, one day after his surgery.

Skip had surgery last Friday to remove his internal testicle (unilaterally cryptorchid), because of its higher probability of causing testicular cancer. (This issue… neutering or the removal of one testicle, is a huge one, and controversial at that. I started to delve into it as part of today’s post, but decided to wait for that discussion when life is a bit more, uh, settled. I simply don’t have it in me to be who I want to be right now if the discussion heats up. Let’s shelve talking about it for a few weeks, but get back to it soon. Promise.)

What I want to talk about today are ways to inhibit or stop dogs from causing injury to previous injuries or surgery sites by licking or nibbling. Needless to say, I started a few weeks ago in order to prepare for Skip’s surgery. I had no idea how Skip would respond, but wanted to be ready if he began to lick the site and cause problems.

I settled on getting a Bencmate inflatable collar (good reviews, good price), and so much easier on a dog than the huge, hard, and horrible “cones of shame” that used to be commonly used, like this one in the photo below: 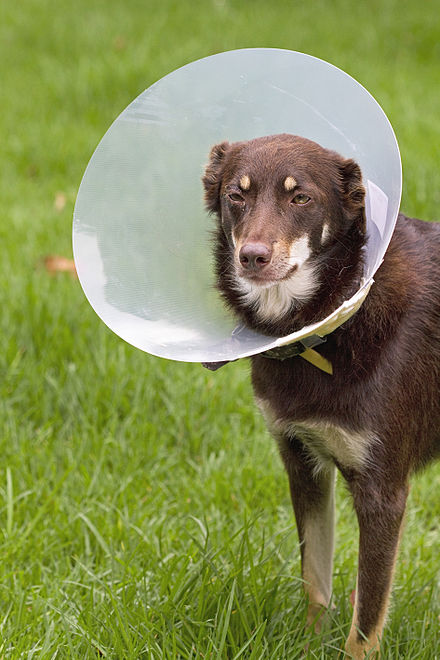 I’ve always hated these, although they seem to be a delight to people who find their dog’s panicked response funny. Thank heavens there are more options now.

I tested out what is often called the “bagel” collar or the “donut” collar when it came–the large size seemed appropriate (Skip is 45 lbs and with a very thick neck rough) and if I snugged it up tight it looked as though it was secure. However, it hasn’t gotten a great test, because Skip is one of those dogs, bless him, who has little interest in licking the incision.

[Comment added Jan 22nd: I strongly suggest that any one looking for direction on lick prevention to read the comments.  They are fascinating. Here’s a quick summary: Most importantly, there is no one magic solution. Some dogs love the E collars and use them as tools. (!) Other’s can’t move in them. Every dog is different and you have to be sure what you are using is truly effective. There are lots of cautions about dogs getting out of the kind of collar you see below, so be absolutely positive that your dog can’t get it off or get around it before trusting it. Also, lots of good words about body suits, with cautions regarding ones that created moisture and caused injury at the incision site.  Bottom line is to be hyper vigilant to be sure what you are doing is safe and truly work for your dog.]

Here’s how it is being used at the moment: 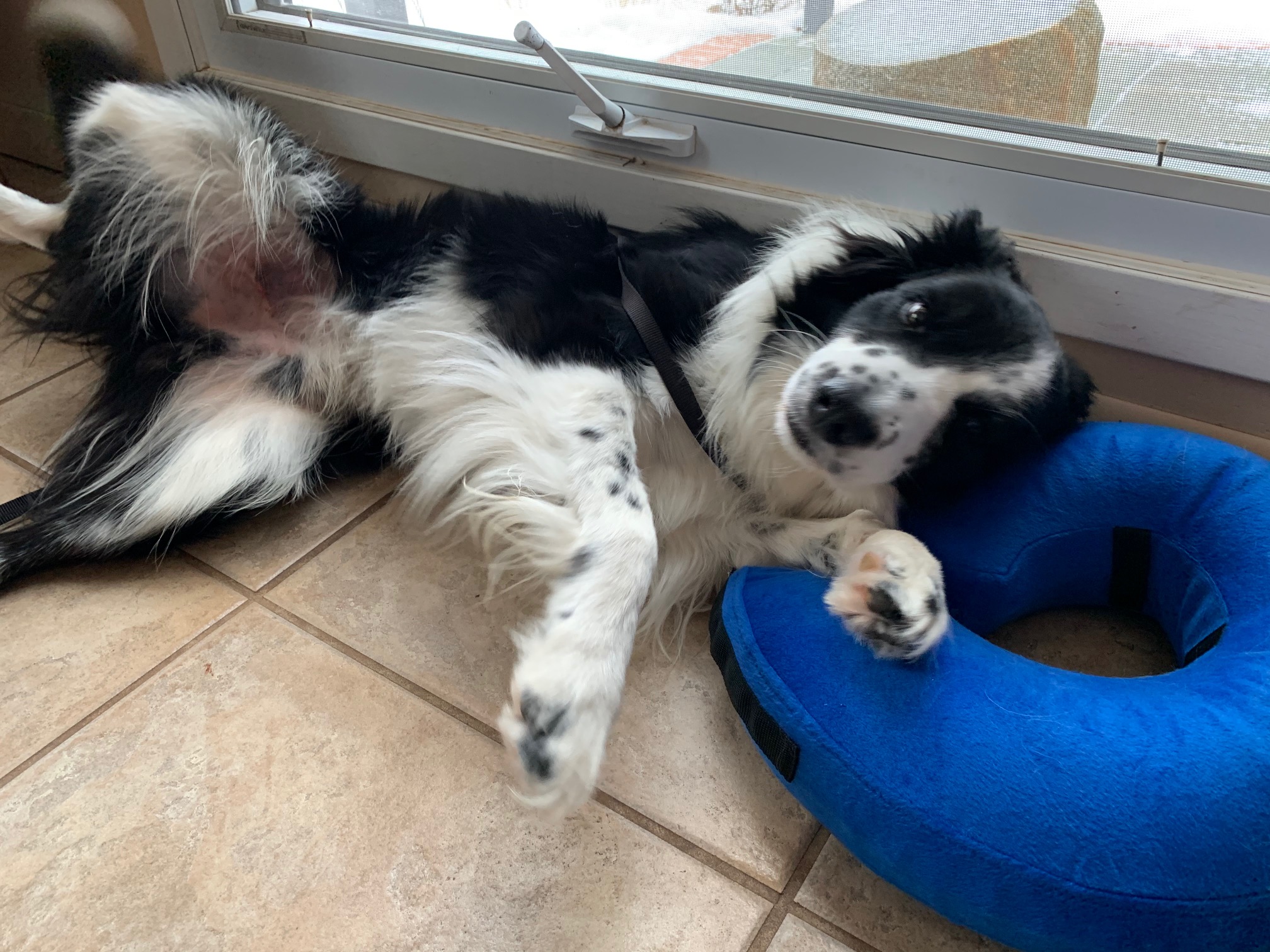 I should say though, that I stayed up with him all night Friday night and Jim and I have never left his side, except when taking the sheep to their new home. He has begun to lick a few times, but each time I gently prevented it by rubbing his head and redirecting his attention. Many people don’t have that option.

There are lots of other choices, however. The best site I found for checking them out was Chewy’s section on Dog Recovery Cones. For example, there are softer cones for both dogs and cats that are far less stressful than the earlier versions. I borrowed this photo from their website, because the whole image is just too damn cute for words: 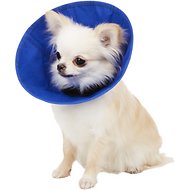 Depending on where the injury is, there are also full body suits that eliminate the need for a cone altogether. I made one myself for one of my BCs years ago, when Pippy slashed her side and required stitiches. I used a small T shirt that I “vet wrapped” up around her and it worked great. But if need be, check out the body suits, and/or the coverings designed to prevent leg licking due to allergies. They can be life savers.

And don’t forget the anti-lick sprays that are readily found on line and in pet stores. The most well known is Bitter Apple, which I’ve found to be effective for a lot of my client’s dogs, and my own in the past. However, some dogs actually seemed to like it. I gave it an unfair test just a minute ago, by putting a small piece of sardine in a bowl and coating it with spray. Maggie sniffed, turned her head, sniffed again, and ate it up. In it’s defense, an itchy incision has nothing on a piece of stinky fish, at least not to Maggie. (Pardon my fingers, I needed to get the shot fast!) There are sprays of other “flavors” out there; anyone tried any? 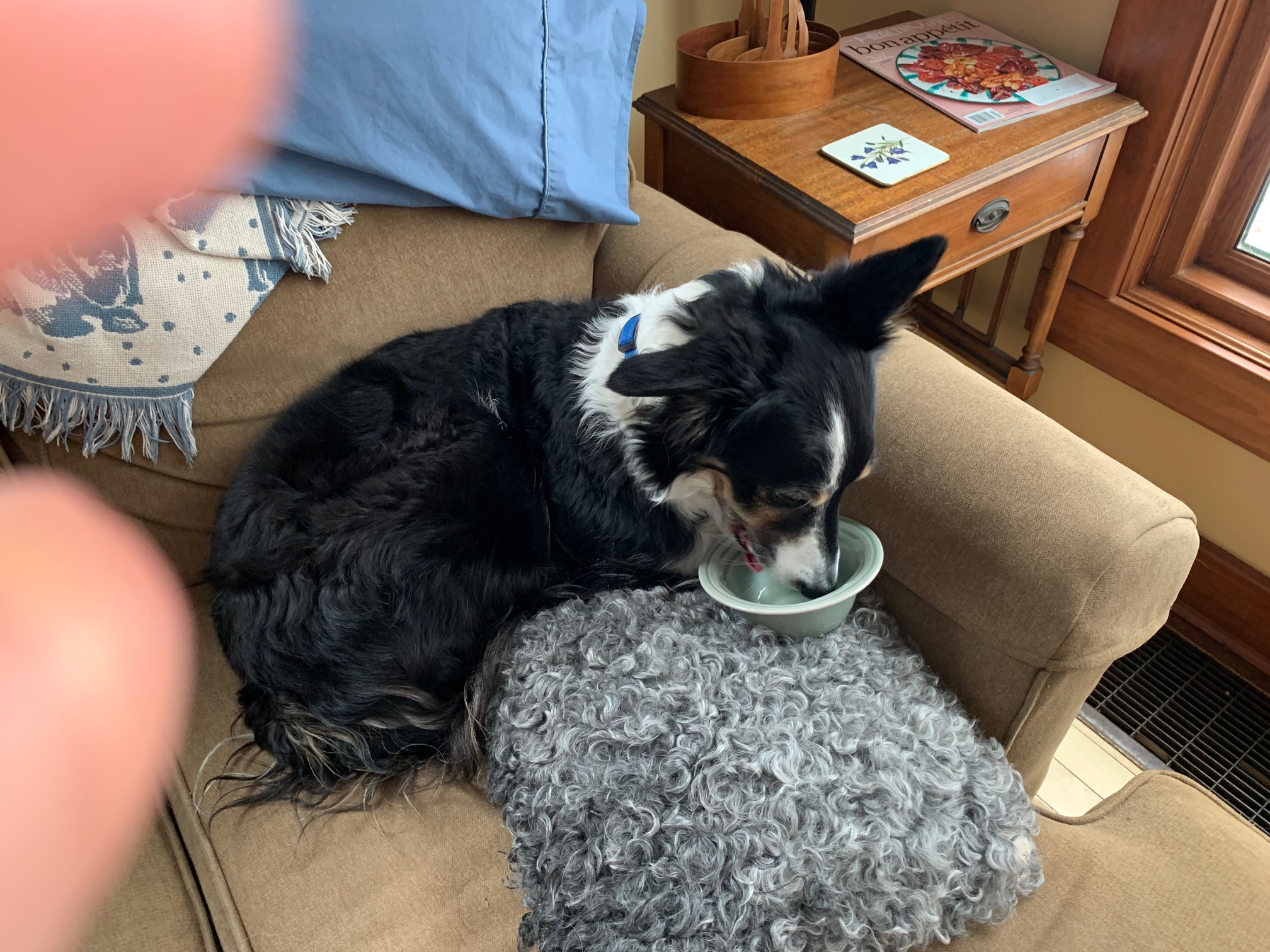 By the way, I talked to two of my vets about how often they’ve encountered problematic licking after surgery. John Dally, who did Skip’s surgery, said that licking hasn’t been problematic with most of his clients. The clinic’s instructions advise us to watch the dogs carefully, because great harm can be caused in little time, but don’t send everyone home with a collar. They have them on hand for anyone who needs them. Carrie Donahue said she’s seen the most licking problems in young male dogs after neuter surgery. She suspects that the scrotum is especially sensitive–add on active, young male dogs and you can imagine the problem.

What about you? What’s been your experience? Lick prevention necessary? If so, what have you used that worked? Didn’t work? We’re all ears.

MEANWHILE, back on the farm: First, Skip is doing pretty well. Too well now, predictably, because now all the meds have worn off and he’s ready to go. Yesterday I put him in his crate while I was outside with Maggie; when I went to let him out he was all flip-spinney and leapy and eyes-shiny because he was sure that it was his turn to work the sheep. Finally! he must have thought. He usually works at least 6 days a week, and it had been since Thursday, given that his surgery was Friday morning.

So now the game is to try to keep him quiet and not too miserable. We’ll work on tricks that don’t involve much movement, but, of course, that’s easier said than done. Luckily, his testicle was right under the skin, and the incision is tiny, no more than an inch long if not less than that. There’s a swelling around the knot used to tie off that I’m keeping an eye on, and a small, slit in the skin at its base. Luckily, he’s not licking it now, and hasn’t seemed inclined to do so much at all. Cross your paws that all goes well; as usual it’s day by day.

But, in other news: Yesterday was the end of an era at the farm. We took Lady Godiva, Lady Baa Baa and Meryl Sheep to a “good home in the country”. Happily, that’s not a euphemism, something told to the kids to lie about their beloved dog being euthanized. Nope, the girls literally got to retire from being the sheep of a competition sheepdog competitor, and I couldn’t be more grateful that a dear, young couple took them in.

Lady Godiva, one of my favorite ewes and closer to a pet than livestock, was beginning to have a hard time negotiating our steep hills, and getting moved around by not one, but now two working sheep dogs. At almost 13 years of age, she’s the one who needed to retire, but I sent two of her best friends with her. Below is Lady G on the right, looking skeptical, and Meryl Sheep on the left, mugging for the camera as usual. Meryl is also almost 13, and it seemed best to retire her too. 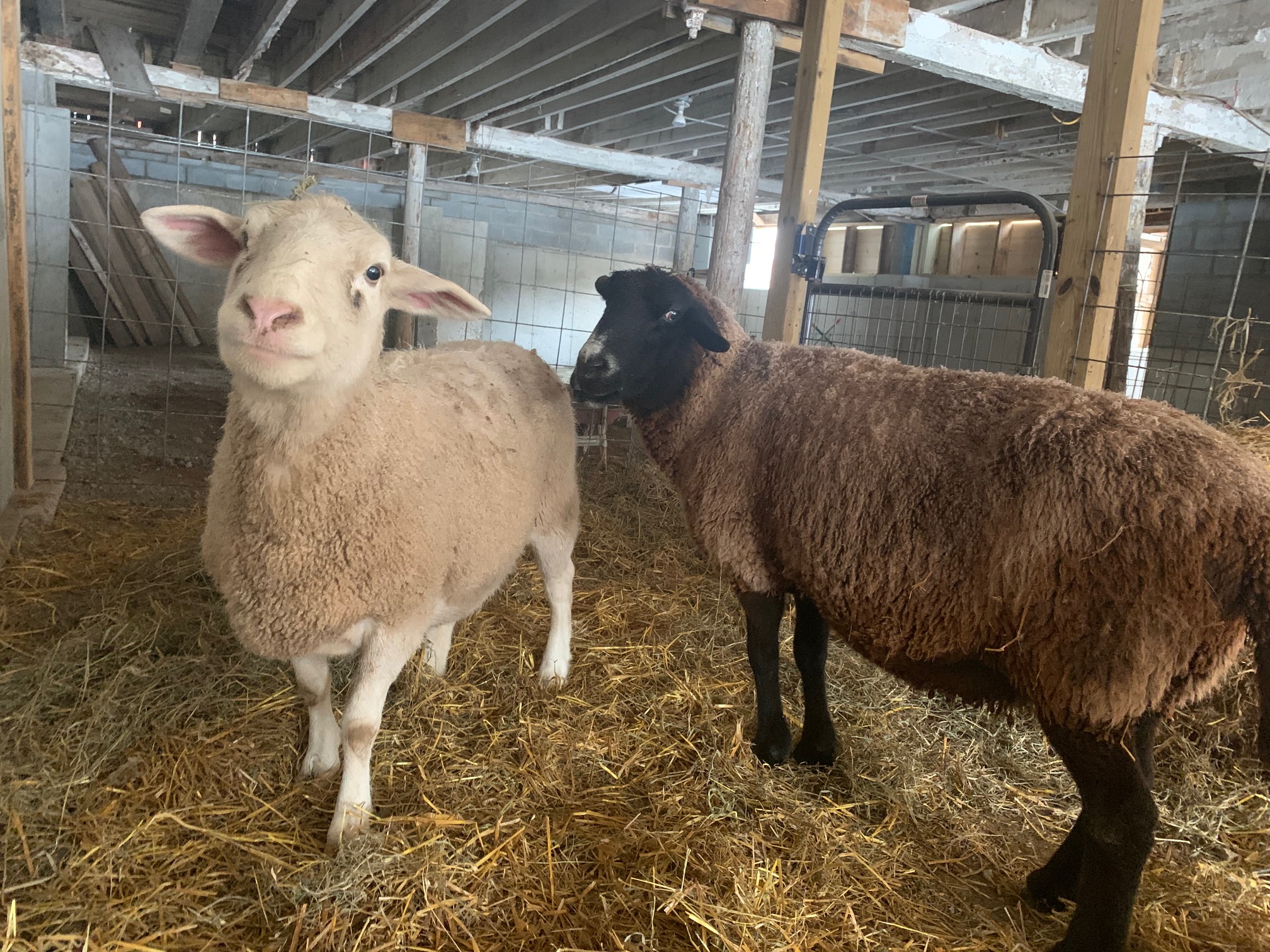 Lady Baa Baa, besides being a sheep with the best name ever (thank you readers!), is relatively young (7 yo), but is Lady G’s daughter. They are best buddies, and I thought it would be better to send her along too. They are now living in an idyllic setting, where they can graze and chew the hours away in peace. Thank you girls, I’ll miss you. I’m so curious who will take over as flock leader! I’m guessing Snow White or Beyonce, I’ll keep you posted.

Here’s Lady Baa Baa, happily eating the apples pieces I gave her right before the transfer. 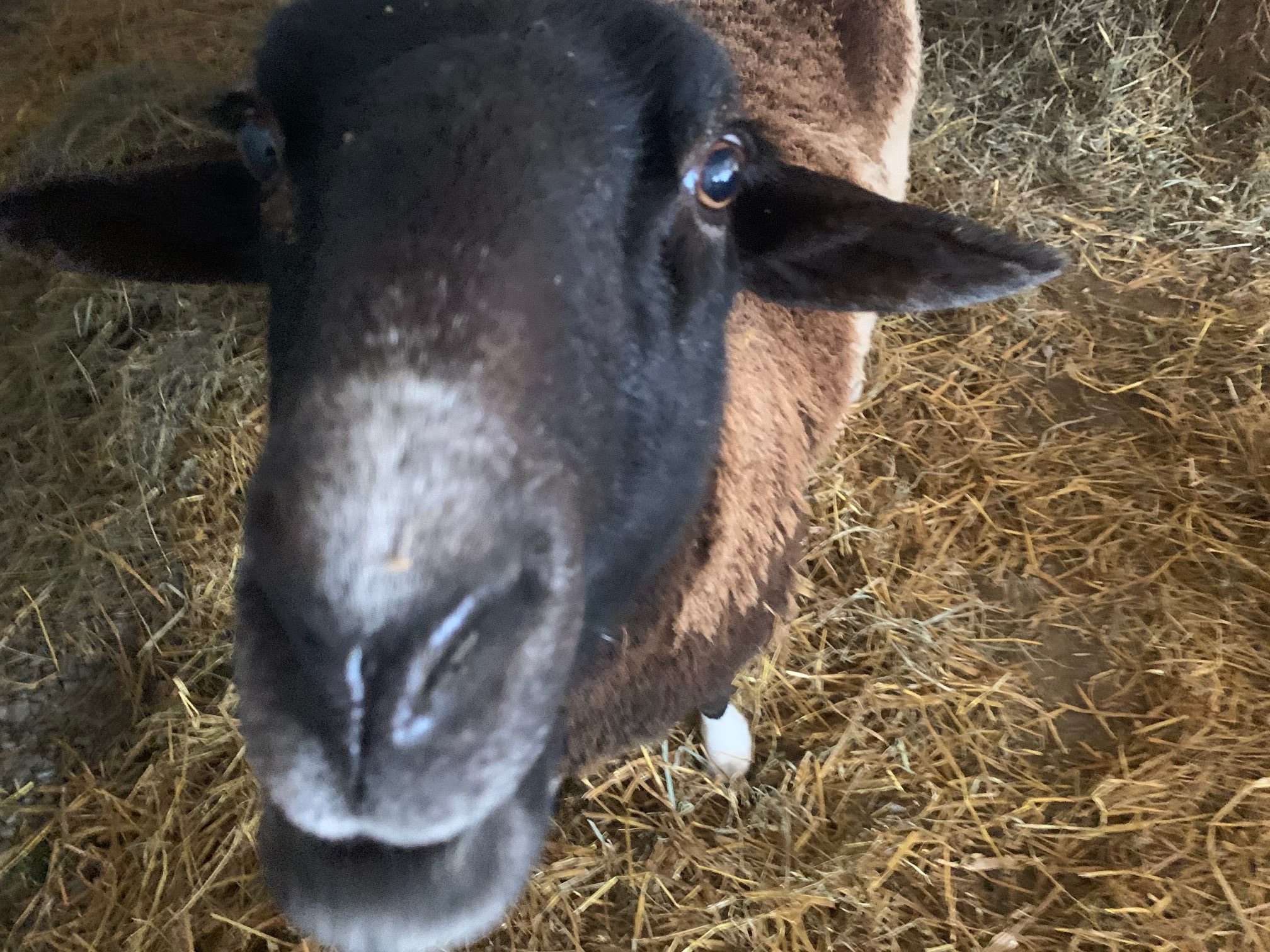 Here they are in the handy trailer that Jim built for them, all ready to go. 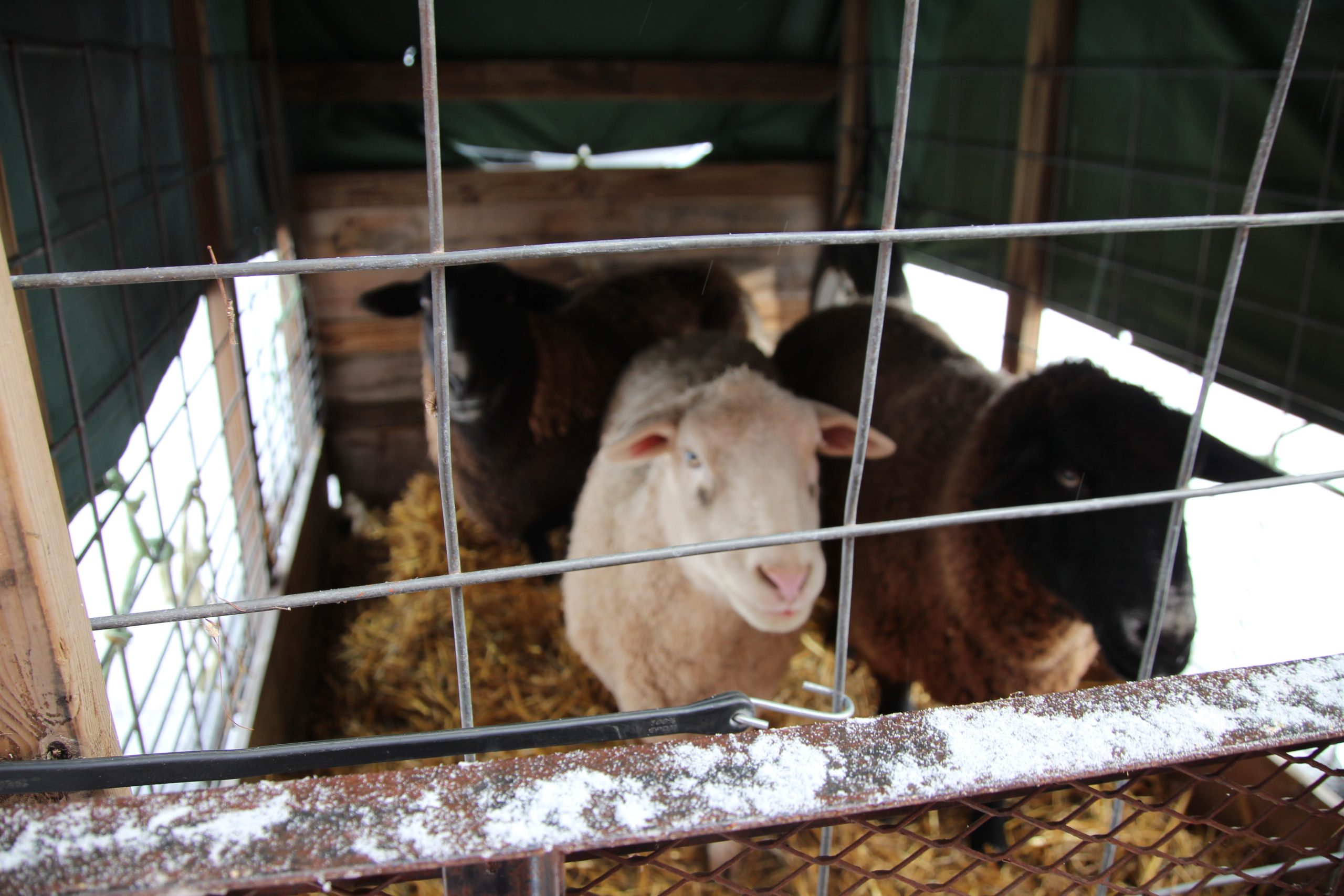 And here’s some more color, from the bulb garden I ordered in fall from White Flower Farm. It was an extravagance for sure, but I am so grateful I was able to afford them. Wish I could send them to pretty much everyone who could use a lift right now. 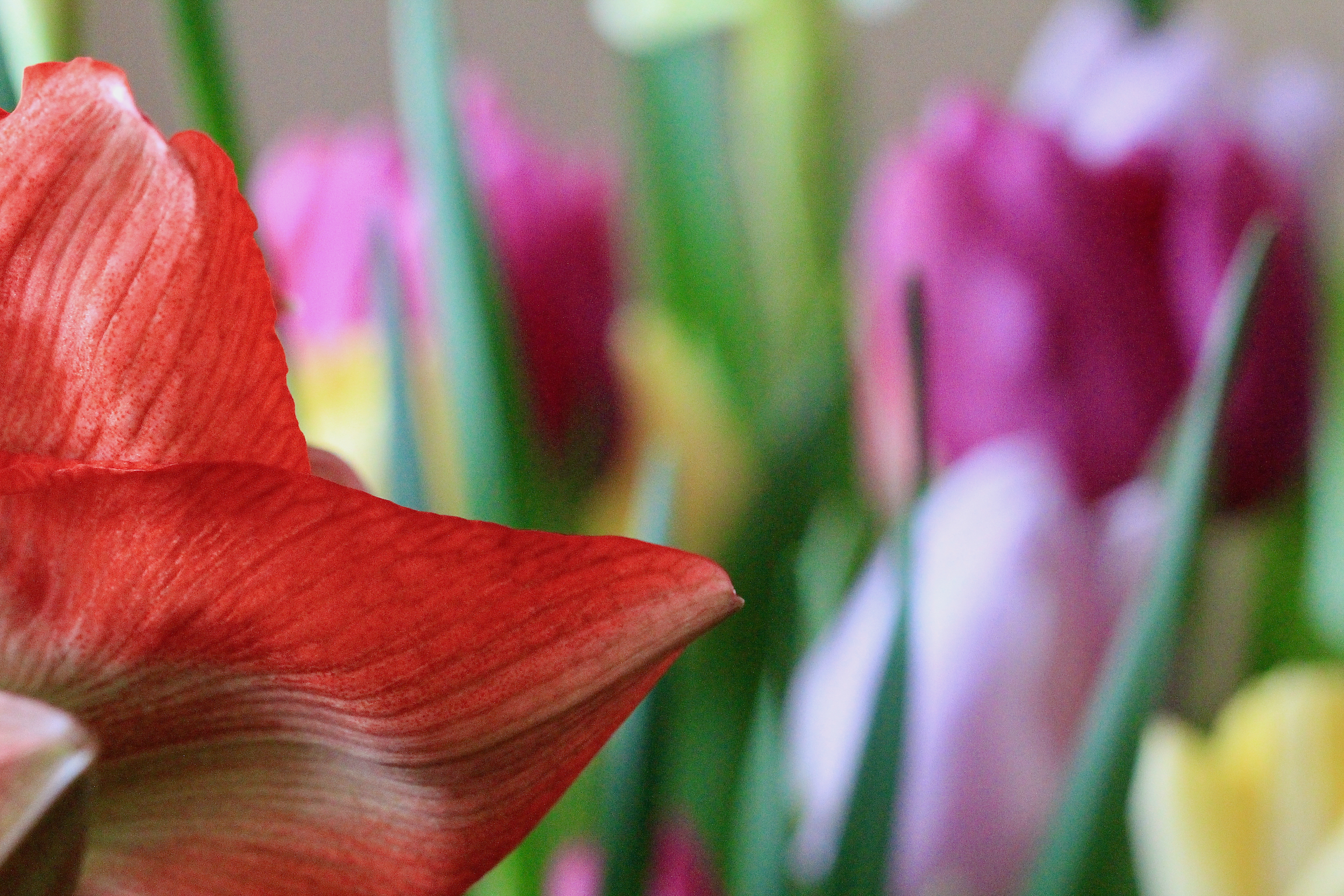 It’s been a hard week–I hope you are doing okay. Here’s to better times for all of us. And dogs who recover from surgery smoothly and easily. We’d all love to hear how recovery has gone for your dog, or your client’s dogs. (And I’d love to hear from more veterinarians, please chime in!)