Earlier I wrote that you “can’t reinforce fear” and used a dog who is afraid of thunder as an example.  For so long we have been told that we’ll just make our dogs worse if we try to comfort them when they run to us in fear when the skies rumble and the rain falls. In this context, it really is doubtful that comforting your dog is going to make him worse. As I said previously, fear is designed to be aversive, and dogs who are terrified of thunder aren’t going to get worse because you stroked their belly.

Indeed, there is research that some interpret to mean that our petting has little effect at all: As I mentioned in a 2008 Bark column (and an alert reader posted), Dreschel & Granger (Applied Animal Beh Science, 2005) found that cortisol levels, a measure of stress, did not decrease when owners pet their dogs during storms. (The most important factor in decreasing cortisol was the presence of other dogs.) However, note that a study by Odendaa & Meintjes (2003, Veterinary Journal) found that cortisol in dogs doesn’t decrease when we are petting them at other times, (although it does in us when we pet them!). However, it is important to remember that cortisol is not the be-all and end-all of indicators of emotion. The authors found that other indicators of internal affect, such as feel-good hormones like oxytocin and prolactin, increased when the dogs were petted, which suggests that stroking did indeed have a positive effect. And hey, if a dog’s behavior changes such that he is no longer pacing and panting while I rub his belly, I’m going to rub his belly!

Here’s an example of fearful behavior from last night at the farm. It’s not about thunder, but it is still instructive: late last night my farmer neighbor was in the field across the street from me in a tractor the size of Connecticut. As soon as Willie heard something and looked out the window, he absolutely lost it. He ran frantically in circles, barking hysterically with his ears pinned, his eyes twice their normal size and a look of sheer terror on his face. When I first heard him bark I honestly thought something terrible had happened, he sounded so horrifically upset. As soon as I saw what it was I said “Will! It’s okay!” and went to him. I used my voice in a soothing way (soft, quiet, looooooooooong notes), sat beside him and asked him to stay still. I rubbed the area between his eyes and the side of his head with long strokes. His barking decreased, although one BOOOOF would still burst out of his mouth every 5-10 seconds at first. In about a minute he stopped barking altogether and stayed still without me helping him. Eventually he put his head down and buried it between my body and my arm. It looked like he was hiding it, and I remember feeling all gooey when I saw that and said “Awww, honey, it’s okay!” but I suspect he was looking as much for the soothing feeling of being cradled as simply hiding his head.

This example brings up an issue that I didn’t address in my first post about reinforcing fear. I should have, but thanks to several thoughtful commentators, I will here. (You can read their comments on the May 4th, 2009 post). They raised the point that surely it IS possible to increase the frequency of a problematic behavior in some contexts, even if fear is one of the motivators. I agree completely that the issue is a bit more complicated that I might have suggested in my first post–ironically I had started to go into it in more depth and then ended up deleting several paragraphs because the post was getting too long and the topic was getting to complicated. But I shouldn’t have, because the topic really does deserve more nuance than I suggested.

The bottom line is you could indeed cause problems by inadvertently reinforcing behavior in certain contexts. There are two things that are important to remember here: one is that fear is an emotion, and “reinforcement” refers to something that increases a behavior. You can’t, technically, reinforce an emotion, but you can increase the frequency of a particular behavior. In the case of thunder phobic dogs I don’t think there is ever a problem, because you are trying to decrease the emotion, which would indirectly decrease the problem behavior. Besides, if you sit beside your dog and stroke him while it thunders, and he stops pacing in circles but sits beside you, then if you are reinforcing anything it is him sitting beside you and not pacing.

Secondly, motivation is key here.  If a dog is barking at visitor from fear, then having the visitor toss treats or toys does NOT reinforce the barking! It decreases it, because the emotion of fear subsides and it is the emotion of fear that drives the behavior. Once the dog associates visitors with treats, her behavior changes to body wags and happy dances. (Visitor = chicken! I love chicken! I love visitors!) This is standard Classical Conditioning, and I can tell you from 22 years of experience that it works incredibly well with lots and lots of dogs. However, if the dog is barking at people not because she is afraid, but because of another reason, it IS possible that you could increase the frequency of the behavior. That’s why it is so important to be able to read dogs and do a good evaluation of a problem behavior. I met a dog once who loved to get right into your face, all body waggy and grinny and relaxed, and then explode in a bark lunge about four inches from your face. I truly believed she just adored it when you startled (I rose at least a foot from my chair), and that is behavior that was clearly being reinforced!

I also think that how you respond to a dog’s fear is critical. First of all, we know that emotions can be contagious, so it is important to not be fearful yourself. Jennifer, in the comments, mentioned the importance of role modeling cool and collected sometimes, and I couldn’t agree more. If I had run to Willie and tried to pet him with an anxious voice and upset affect, it well might have made him more fearful.

Oh, my, I could go on and on, but life continues and I need to get to other things…. But here’s a link to the study on Storm Defender Capes that has just been published (thanks to an alert reader, Chris, for the link!). It looks as though capes in general do indeed have a positive effect, and that there might be something to the Storm Defender cape itself. I haven’t seen the whole study yet, but check it out, even the abstract is interesting. It in Applied Animal Behavior Science.

Meanwhile, back at the farm, it’s been cool and gorgeous and busy. This time of year in the country is never-endingly full of chores. (Did I mention the 150 exams to grade?) The lambs (who, with one exception, are doing beautifully) are thriving but need worming, the grass is growing and so are the thistles which have to be killed one by one, the ram needs to be split out before he breeds Snickers and Truffles, the gardens are full of weeds, the LP tank is leaking, the water tank up the hill needs to be scrubbed out…. and I need to sit in the swing at least a few minutes every day. Can you see it calling to me? 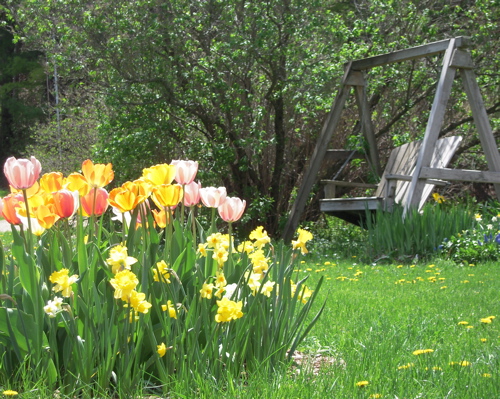 Here’s Sushi this morning. You gotta love the flexibility of cats. I love that Sushi maintained her x-rated yoga pose even while she moved on to licking her legs. 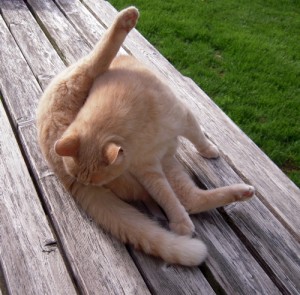 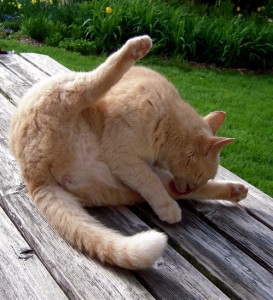